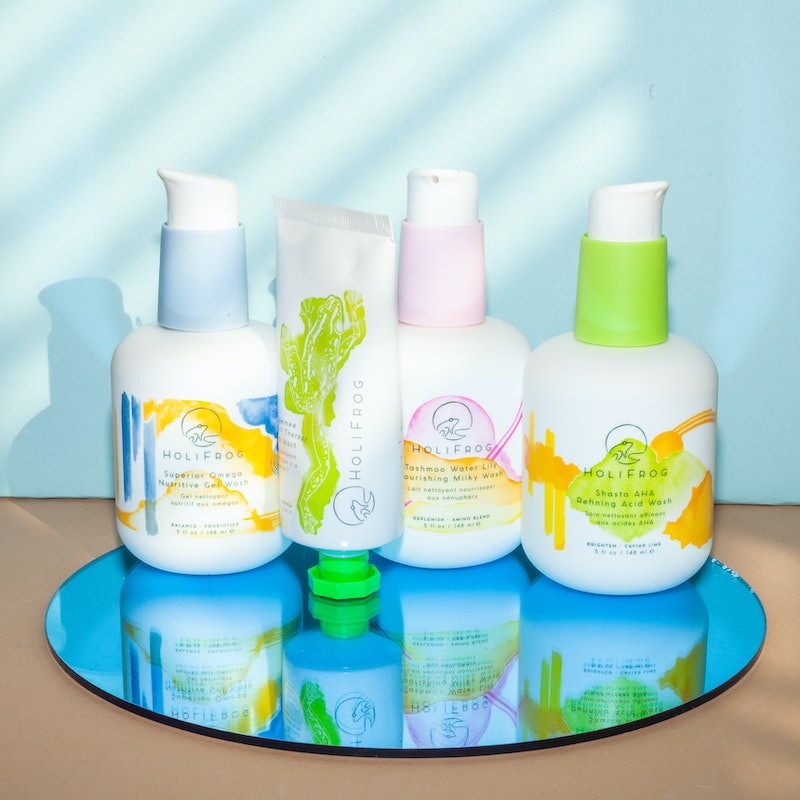 “Whenever I have a bad day, my first thought is usually: ‘I just need to get home and wash my face,’” Emily Parr, the founder of Poké PR and a newly-minted skincare entrepreneur, tells The Zoe Report. And really, who can’t relate? There’s no better feeling than washing the day away... until that dry, tight, too-stripped sensation sets in, that is. Parr decided to investigate why her face would get “moody” post-cleansing — and realized that not one of her go-tos was clean, effective, and safe for her sensitive skin. So naturally, she launched HoliFrog Skincare, her clean face wash line.

The resulting brand, launching Sept. 17 at Net-a-Porter, Space NK, and Dermstore, boasts four clean “washes”: the Kissimee Vitamin F Therapy Balm Wash, the Shasta AHA Refining Acid Wash, the Superior Omega Nutritive Gel Wash, and the Tashmoo Water Lily Nourishing Milk Wash. All four are formulated without harsh or harmful ingredients — think: sulfates, parabens, formaldehyde, et al — but don’t think that makes them any less efficacious. The brand describes itself as “Holistic-Functional” (meaning, it sits at the intersection of skin, health, and function) and is firmly rooted in science. Even down to the name.

“Holi,” obviously, stands for holistic, and “frog” is, well, frog. “‘Scientists have been studying environmental changes via frog skin for years,” Parr explains. “Since their skin is so permeable, they literally can’t live in toxic environments... and neither can our skin thrive when we're not formulating skincare products responsibly.” Instead of applying that ethos to the entire skincare spectrum, Parr and her co-founder Majeed Hammat decided to focus in on cleansing for their initial launch.

“There is so much innovation in serums, creams, and face masks that we felt there was an opportunity to borrow inspiration from these categories and apply them to washes,” the founder explains. “After all, it’s the one step that’s really a non-negotiable.” It’s also the one step that’s most likely to damage your skin.

Many traditional cleansers include ingredients like sulfates and other foaming agents, alcohol, and parabens — and, surprise, none of them are totally safe for your face. “Sulfates can be very irritating; they dry out the skin, and some people notice increased acne,” Dr. Devika Icecreamwala, M.D., of Icecreamwala Dermatology tells TZR. “Foaming agents can make the pH of the skin unbalanced, which causes disruption of the skin barrier.” She notes that alcohol does the same, and parabens (typically used as preservatives) have been shown to cause hormonal imbalance. Not exactly the way you want to start the day, right?

“When it came time for us to formulate HoliFrog, I told our chemist on the first call: ‘I want every ingredient to be a key ingredient,’” Parr explains. That means no fillers, no “fairy-dusting,” and no compromising. “Everything in our formulas has a positive function, because one less-than-superior ingredient can have a negative effect on someone’s skin and ultimately wipe out the entire formula’s benefits,” she says. The brand is so dedicated to safety that it’s embedded a third-party widget onto its product pages, to act as sort of an ingredient glossary. “I want the consumer to learn about every single ingredient we use via a database that we have not created,” she says. In other words, you won’t get one-sided, marketing-led definitions here — just the facts.

You’ll notice a lot of non-fragrant plant oils in that glossary, which help to break down the dirt and debris sitting on your skin. The Kissimmee Balm is made up of grape seed, sunflower, mongongo, cranberry seed, marula, avocado, moringa, and jojoba oils; the Tashmoo Milk uses apricot and sunflower oils; and the Superior Gel boasts broccoli seed, flaxseed, and sea buckthorn oils. Even HoliFrog’s exfoliating cleanser, the Shasta AHA Wash, includes a mix of tamanu and rosehip oils to replenish moisture as the AHAs (mandelic acid, to be exact, one of the gentlest acid exfoliators out there) deep-clean pores. “As an oily skin girl, I’ve learned that fighting oil with oil is very effective,” Parr shares.

She’s also learned that there’s no such thing one cleanser to rule them all. “‘Situational Cleansing’ is a thing,” the founder laughs. “I have found that different times of day or situations require me to swap out my cleanser.” She calls HoliFrog’s four core products her “wash wardrobe,” and rotates them out, depending on what her face is feeling that day.

Ahead, shop all of HoliFrog’s clean cleansers while Parr demonstrates exactly how to create your own “wash wardrobe.”

"I start the morning with Tashmoo, our milky wash, to wake up my skin — and wash away the drool and sleep sweat," Parr says. "It's super gentle (because you don't need anything heavy-duty in the morning unless you sleep in your makeup, which I pray no one does) but floods my skin with amino acids and hydration."

"After my workout, I use Shasta, our acid wash. This one was the very inspiration for the whole line. My dream was a face wash that had 5 percent AHA acid to de-gunk my skin after intense workouts, but was counterbalanced with rich oils like tamanu and rosehip. I think of this one like a serum-cleanser. Leave it on for a minute and let it just sink in and do the work."

"At the end of the day, I double cleanse religiously: I massage Kissimmee, our oil-based balm, onto dry skin and then emulsify with warm water to whisk off the surface grime."

"For the encore, I follow up with Superior, our gel wash, for a hardcore yet gentle wash to really oust any clingy residue — but also flood my skin with Omegas, prebiotics, and probiotics."