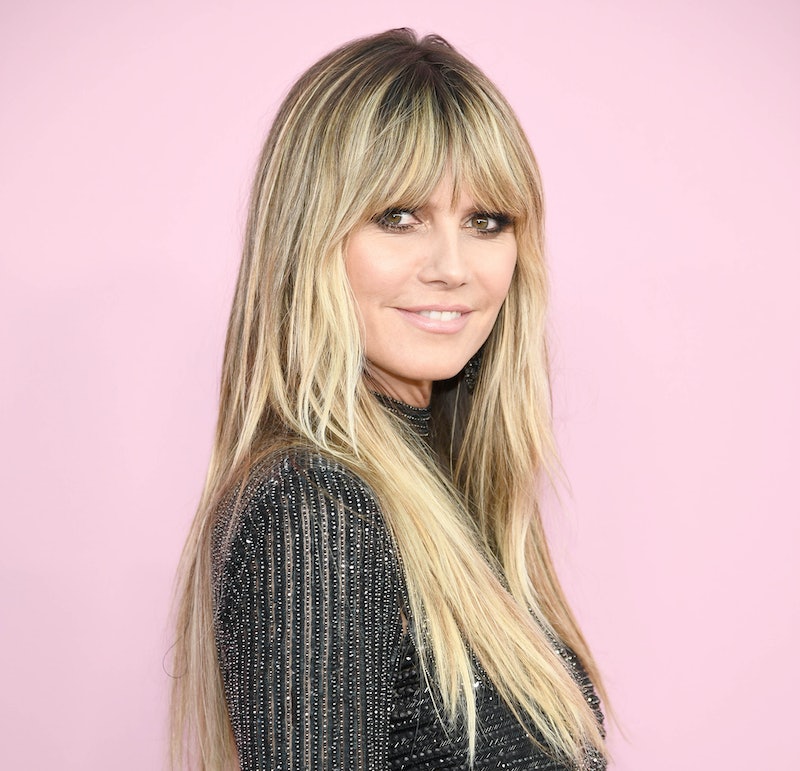 Wedding bells were ringing (for a second time) for German power couple Heidi Klum and Tom Kaulitz over the weekend. After quietly tying the knot in a secret ceremony back in Feb. 2019, a few short months after they announced their engagement via an Instagram post in Dec., the supermodel and Tokio Hotel musician said their second round of "I do's" in a not-so-secret celebration in Capri on Sat. While fans didn't get a glimpse at the wedding dress Heidi Klum wore down the aisle earlier this year, the breathtaking gown she donned for the lavish Aug. 3 celebration definitely makes up for it.

On Sat., Klum and Kaulitz boarded luxury yacht Christina O in Capri, Italy for their luxurious summer wedding ceremony. According to People, the storied vessel was once owned by Aristotle Onassis, and hosted the wedding receptions of both Princess Grace Kelly to Prince Rainier III and Jacqueline Kennedy Onassis to Aristotle. To say Klum perfectly fit the royal bill with her extravagant white wedding gown would be a serious understatement.

On Mon. Klum took to her Instagram to share the first photo from the weekend nuptials. "We did it ❣️Mr.&Mrs. Kaulitz ❤️❤️❤️❤️❤️," the model captioned the stunning snap of her and Kaulitz, kissing aboard the yacht underneath an awning of white flowers.

But the one facet of the photo people can't seem to stop talking about? Klum's wedding gown — a strapless, floor-length number with an über-voluminous skirt, off-the-shoulder puff sleeves, and all-over lace detailing (designer yet to be revealed). As for her bridal hair and makeup? In short, it was boho-chic. Klum dressed up her long, beach-y waves with a veil that cascaded behind her as she walked, opting for neutral eyes and lips.

Klum and Kaulitz have certainly kept fans on their feet — and they've been quite notorious for keeping mum about their relationship. The first major announcement came back in Dec. 2018, when Klum posted the cutest selfie of Kaulitz and herself (well, mostly her hand, actually) that showed off a massive rock on that finger.

At that time, no official wedding date had been set, though she did reveal in a Feb. interview with Entertainment Tonight that plans for the event were coming together. "We’re two Germans. It will be very organized and on time. Very, very much on time and very organized," she added.

Back in July of this year, marriage certificates obtained by TMZ revealed the couple did, in fact, make it official in Feb. (no confirmation whether it was before or after Klum gave her ET interview.) The two never confirmed or denied the reports, but as of Sat., there's no denying it — Klum is a married woman, and she was one breathtaking bride.