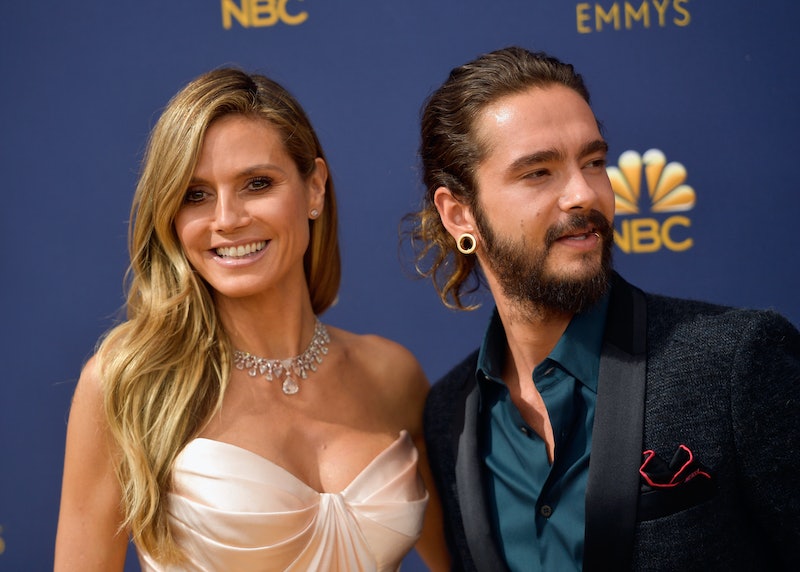 It's official: Heidi Klum got the best Christmas gift of all this year. Like the lyrics of "Santa Baby," the Project Runway host got a ring, and we don't mean on the phone. That's right, Heidi Klum got engaged to rocker Tom Kaulitz over the holiday, and she announced it in the cutest way.

The model shared the news with her fans by posting the sweetest photo to Instagram and Twitter on Dec. 24. The couple was all smiles in the candid black-and-white selfie, which, of course, starred her new finger candy. She kept the caption simple with an all-caps "I SAID YES" followed by a heart emoji.

Kaulitz is a 29-year-old German guitarist for the rock band Tokio Hotel. He and Klum sparked dating rumors in March when they were spotted kissing on the set of America's Got Talent. Then, in May, they confirmed those rumors by making their first public appearance together at the Cannes amfAR Gala. More recently, the TV personality's new beau participated in her annual tradition of dressing in elaborate costumes — Shrek and Princess Fiona, to be exact — for her celebrity-studded Halloween extravaganza.

After Klum's divorce to singer Seal in 2012, she told Marie Claire that she certainly wasn't in a hurry to marry again, saying she didn't "have the urgency anymore." Thus, it might have come as a surprise to some that the couple is planning a wedding after just eight months of dating, but judging by the genuine joy on their faces, they couldn't possibly be more thrilled.

It's unclear where exactly Kaulitz popped the question, but the mom of four posted several videos of the whole family at Disneyland leading up to the big announcement. She certainly hasn't been shy to show her affection for the musician on social media, constantly posting sweet photos of the two together, as well as videos of Kaulitz rocking out on the guitar with her children.

In Nov., she posted a video of the two twirling around the living room, captioning it, "you make me feel like dancing." Rumors of their engagement sparked months before it actually happened, thanks to the colossal diamond ring Klum sported to the Emmy Awards when she and Kaulitz posed for photos together.

She shot the rumors down immediately, saying that wearing big rings is literally her job. "There's nothing more to it than that," she told People in Sept. This time, though, it's no false alarm. It won't be long now until the model will be walking down the aisle.