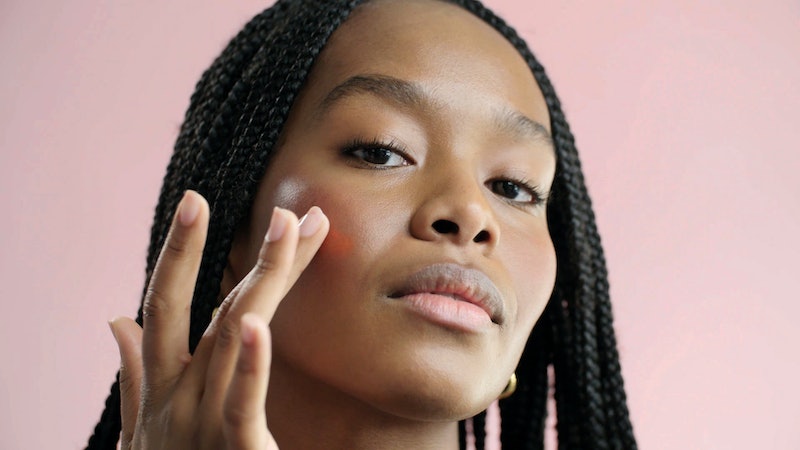 For a cosmetics brand that focuses on skincare before makeup, Glossier is still the genius behind some of the cult makeup products you see everywhere. Glossier's Boy Brow revolutionized how the world filled and fluffed eyebrows, the Cloud Paint blush made people forget why they ever used powders, the Lash Slick mascara has a nearly perfect rating out of almost 1,000 reviews on Glossier's set — and starting Dec. 5, you can save on all three top rated makeup products by buying an updated Glossier holiday makeup set.

Titled simply as "The Makeup Set", the $40 kit will contain one Boy Brow, a Lash Slick, and one Cloud Paint. Buying the three popular Glossier products as The Makeup Set instead of individually saves you $10; since Glossier rarely goes on sale, the brand features evergreen value sets as a way to save on the popular cosmetics. Though The Makeup Set may potentially be the most crowd-pleasing release yet, don't pass up the other Glossier value sets: the $40 Glossier Phase 1 Set saves you $12 on skincare, and The Super Pack reduces the price of all three Glossier serums from $84 to $65.

The Makeup Set will permanently replace Glossier's previous $40 Phase 2 Set on the website, which included the Boy Brow, a Generation G lipstick, and the Stretch Concealer for a total of $12 in savings. Though The Makeup Set won't save you quite as much money as the previous Phase 2, refreshing the kit to contain fan favorites shows how down-to-earth the brand still is.

The revamp also puts the focus back on Glossier's essentials. Though it was nice to save on Glossier's Generation G lipstick via the previous Phase 2 set, The Makeup Set now contains Glossier's three makeup best sellers, which includes the two staples you probably use every time you get ready in the morning (mascara and a brow product), plus an additional skin-enhancing product (the Cloud Paint).

Additionally, The Makeup Set is more accessible for Glossier fans who already have an established foundation routine; whereas the old Phase 2's lightweight Stretch Concealer may have put off shoppers who prefer fuller coverage, The Makeup Set has products that can be used to build upon any set foundation (literally).

The Makeup Set release isn't the only news for Glossier fans. The limited edition Pocket Mirror will also be available on Dec. 5 for anyone who wants to take Glossier's perpetually positive aesthetic with them wherever they go. The minimalist mirror is engraved with the message "you look good" in capital letters, and comes with an equally cute zip pouch for safekeeping. Buy the Pocket Mirror for $10 on Glossier's website, or get it free with any purchase over $50 using the code YOULOOKGOOD.

Simplify your makeup routine down to only The Makeup Set's new essentials, or use the three top-rated Glossier products as just steps to build your own elaborate makeup looks — however you use the set, you're sure to look good.