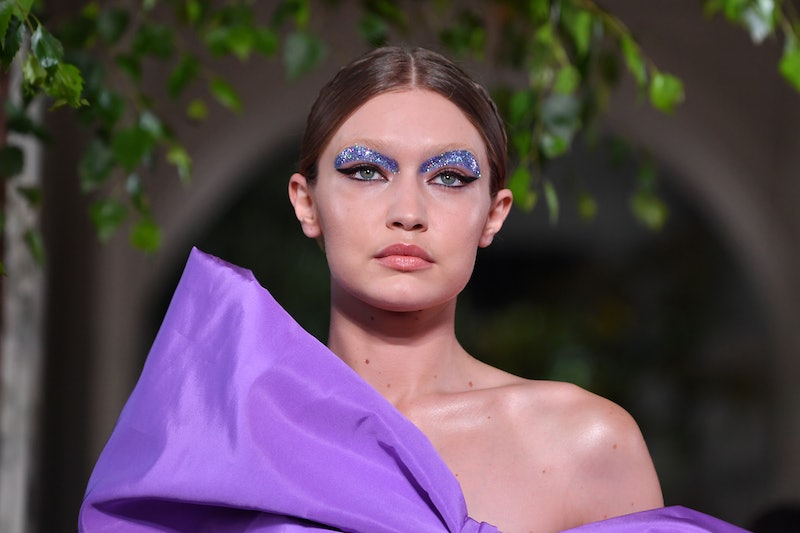 The Hadid sisters have officially returned from a picture-perfect vacay in Mykonos, which means they're back to city-slickin' in the Big Apple while simultaneously serving impeccable street style looks. During a stroll through the city on Fri., Gigi Hadid's off-duty look was a low-key take on the neon trend, which proves to be going strong after hitting a fever pitch a few months back. Donning highlighter green bike shorts and neutral trainers, the 24-year-old stayed incognito behind cream-colored sunglasses, appearing unbothered with AirPods in her ears and an army green patent leather clutch around her wrist.

With her golden hair down in relaxed waves, the supermodel sported her signature stacked chains atop an oversized long-sleeved t-shirt. The no-frills outfit served as a no-brainer formula for a low-key weekend, offering movability with a street-smart flair in one fell swoop. Summer in the city is still charging on with forecasts in the mid-80s, but as fall approaches out on the horizon, lightweight sweatshirts such as Hadid's are definitely in order.

And, if the Hadid sisters and fellow tastemakers such as Sophie Turner and Emily Ratajkowski have anything to do with it, dad shoes are bound to stay on consistent rotation even as temps begin to fall.

The next time you've got places to be and to-do lists to tackle, copy Hadid's exact outfit formula for top-notch style at minimal effort. Less is more when it comes to low-key athleisure, and the eye-catching hue of Hadid's shorts lends a bold focal point for the otherwise minimalist look. Ahead, shop The Zoe Report's three looks inspired by Hadid's, each one serving up ample amounts of cool while delivering pops of color throughout.

Whether you're actually going cycling or are just hanging out, these neon green shorts are your new best friend.

You can't go wrong with a classic like this, especially when the price is slashed in half.

Add these sneakers to your cart and you'll be one step closer to channeling Hadid's style, because the model can't stop wearing this affordable, chunky style.

Quality, affordable basics make the world go 'round, do they not?

Take the tie-dye trend for a spin and drape this subtle lavender sweatshirt around your shoulders.

Enjoy a moment of coordination with these matching purple sneakers from Nike.

Keep florals going strong through the rest of summer with these unique and *majorly* discounted bike shorts from & Other Stories.

Go for sage green with this comfy staple from Acne.

Stay on the beige color way with these budget-friendly sneakers and channel the '90s with the one-and-only Fila.