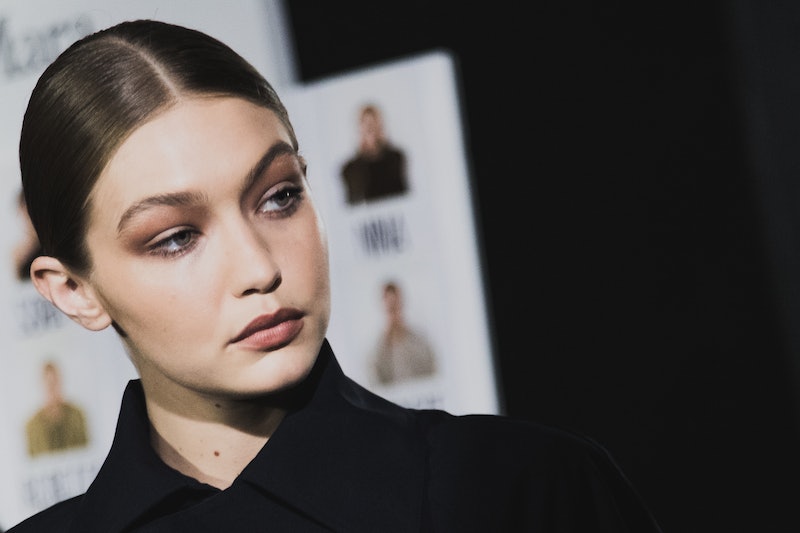 Gigi Hadid was keeping it incognito on Day 2 of Men's Paris Fashion Week. After walking the runway for designer and friend Virgil Abloh's Off-White spring/summer 2020 collection, the supermodel left the building in an all-black outfit as she waved to fans and paparazzi. In the monochromatic look fit for an undercover cohort, the 24-year-old proved her affinity for low-key off-duty style, opting for sleek minimalism after donning a painterly, technicolor blazer on the runway moments prior. Gigi Hadid's Prada cargo pants tied the entire look together, and were matched with a black Off-White "Staff" tee and black oxford boots.

With a sleek, wet slick-back and a bold red lip, Hadid's beauty look was chic but minimal alongside the casual outfit. Building upon the tactical vibe with a pair of futuristic shades from her sunglasses collaboration with Vogue, the jet-setter borrowed from her younger sister's signature Matrix-inspired aesthetic. Finishing it off with a plethora of necklaces for the fun-loving, beach-y flair she's known for, Hadid wore her favorite gold chain from Missoma alongside those Éliou beaded puka shells she can't get enough of.

With a compact nylon backpack in tow, Hadid hopped in a car and was off to her next stop for the whirlwind week of shows.

Hadid isn't the only one opting for cargo pants this season. Fellow models Kendall Jenner and Emily Ratajkowski have also rocked the moveable trousers, signaling the army-inspired staple is most definitely in for summer. Shop The Zoe Report's selection of cargo pants below, and style them with strappy sandals or low-top sneakers, depending on the vibe you're going for. You don't even have to worry about grabbing a handbag — because for once, pocket space is ample.

Snag Hadid's exact style and juxtapose the wide-leg silhouette with a pair of sleek pumps.

Go the traditional route with this khaki hue, and style with a crisp pair of white sneakers.

Make a nod to the '90s with this affordable style with stitched detailing, and pair with a fuzzy cardigan and combat boots.

Offset these army-inspired pants with stilettos and a sheer blouse for an edgy night-out look.

Pair this denim style with mules and a cropped ribbed tank for a low-key weekend look.