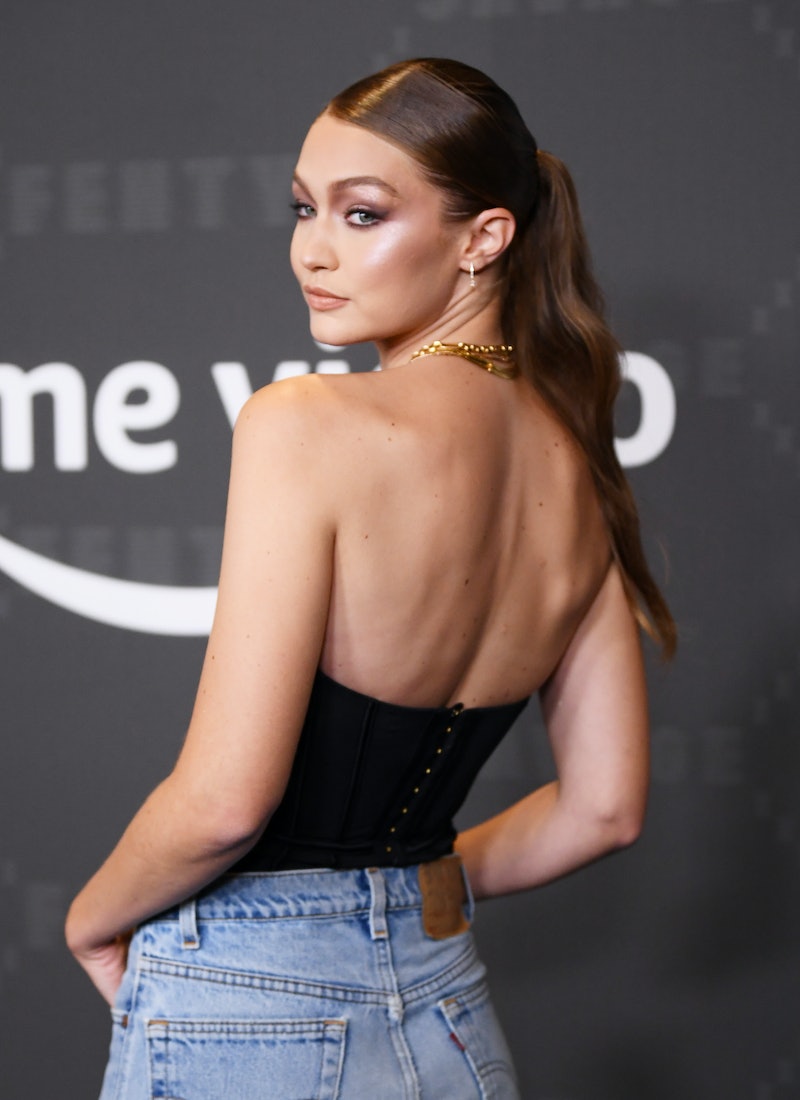 Gigi Hadid has been serving up killer looks left on right during fashion month — and there's still a little over a week left, so make sure to follow along as she continues to shut down the streets in Milan and Paris with standout getups in the coming days. Since the kickoff of the four-week long sartorial extravaganza, the model has made a case for sporty-chic outfits (aka, track pants with a sleek silk shirt); sported a pair of ever-controversial dad shorts, yet again; and made a convincing case for wearing a bralette as a top. Yep, Hadid's recent evening look proved the lingerie staple doubles as the perfect going-out essential — and you'll want to follow her lead straight away.

You can always count on Hadid to spark a new trend — whether she meant to or not. And that's why it's safe to assume that you're going to see the model's going-out outfit pop up everywhere in the next few months — it's that good and actually quite easy to replicate. All you need is a bralette (yes, really) and a cool blazer, and you have the makings of the tastemaker's Sept. 16 getup.

On Mon. night, Hadid was photographed arriving the Love magazine's annual London Fashion Week soirée — and as you'd expect, the attendees (looking at you, Irina Shayk) were dressed to the nines, churning out one covetable ensemble after the other. But the look that simply couldn't be beat? Hadid's.

The model strutted into the party — and she clearly did come to play around. Hadid was the epitome of a party on top, business on the bottom, wearing an elegant black Ralph Lauren suit that consisted of a menswear-inspired blazer and coordinating trousers, both of which were embellished with sparkling crystals.

The party part of her getup come in the form of black Araks bralette that was designed with sheer, mesh detailing. It peeked out from underneath her blazer — and set the sartorial world aflame.

That's right, rather than wearing a fitted bodysuit or a crop top, Hadid decided to reach for the comfy-chic lingerie staple and rock it as a shirt. But the model isn't the only one to get in on the bra-as-a-top trend.

In fact, her younger sister, Bella Hadid, walked the Savage x Fenty red carpet in a similar look, wearing a lace bra with an oversized suit, and plenty of others are dishing out their own take, too.

Test drive the latest fashion craze (read: teaming a bralette with a suit) for your next night, but before you do, you'll want to scoop up The Zoe Report's all-time favorite bralettes that effortlessly double as a shirt. Shop them, below.