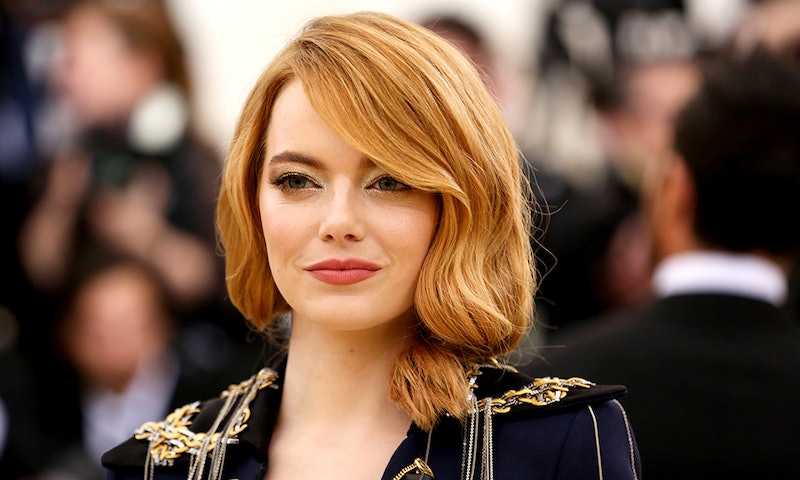 Prepare to a book an appointment with your hairstylist, because Emma Stone got a blunt-lob haircut and you're about to follow suit. On Thurs., celebrity hairstylist Mara Roszak took to Instagram to debut the actor's new look: a sleek, angled cut with a slightly shorter length in the back. The cut isn't a major change of pace for Stone, who never strays far from mid-length hairstyles, but it's a subtle refresh for yet another season of red-carpet events and movie premieres.

Roszak, whose client roster also includes the likes of Cara Delevingne and Zoe Saldana, gave Stone her new look ahead of the U.K. premiere of The Favourite on Oct. 18. "Someone got a chop chop today," Roszak captioned the photo of Stone. "Blunt & little shorter in the back."

Although subtle, Stone's hair is a solid three to four inches shorter than her most recent look. The photo shows Stone with her signature texture (read: loose, undone waves with just enough body) and her strawberry-blonde hue.

Longer than a bob but not quite mid-length, the actor's lob is the ideal cut for anyone looking for a quiet change. And considering this season has witnessed a spike in super-short cuts and choppy pixies (looking at you, Kristen Stewart), Stone's new look is excellent inspiration for a grown-out bob.

In late Sept., Stone's hair made headlines after Roszak and the actor experimented with one of the prettiest beauty trends from New York Fashion Week. Stone arrived at the New York Film Festival premiere of The Favourite with fresh flowers woven throughout her hair. The style took cues from designers like Mansur Gavriel and Rodarte, both of whom sent their models down the runway with an updated, fashion-forward spin on the flower crown.

"How fun is this? Fresh roses in hair!? #EmmaStone for the premiere of @thefavouritemovie," Roszak captioned the photo of Stone's incredibly unique look.

Stone isn't the only celebrity to gravitate towards a subtle, healthy haircut this fall. Kate Middleton, she who rarely switches up her signature long hair, returned from maternity leave in early Oct. with a brand-new look. The Duchess of Cambridge opted for a shorter, bouncier haircut complete with face-framing layers and soft highlights.

Of course, bold celebrity haircuts have also had their moment this season. Alongside Kristen Stewart's aforementioned pixie, Julianne Hough showed off a new look in Sept, too. The dancer showed up to the A Star Is Born premiere in Los Angeles with a choppy bob and wispy bangs for the ultimate French girl-inspired haircut. As we approach a season of premieres and award shows, it's likely the celebrity set will continue to debut new looks.

With cold-weather season officially on the horizon, a sleek new haircut is an easy way to liven up any winter outfit (think: you'll want something to look forward to when you're throwing on an oversized parka every morning). When you inevitably make it to the hair salon, don't forget to bring a photo of Stone's blunt lob.