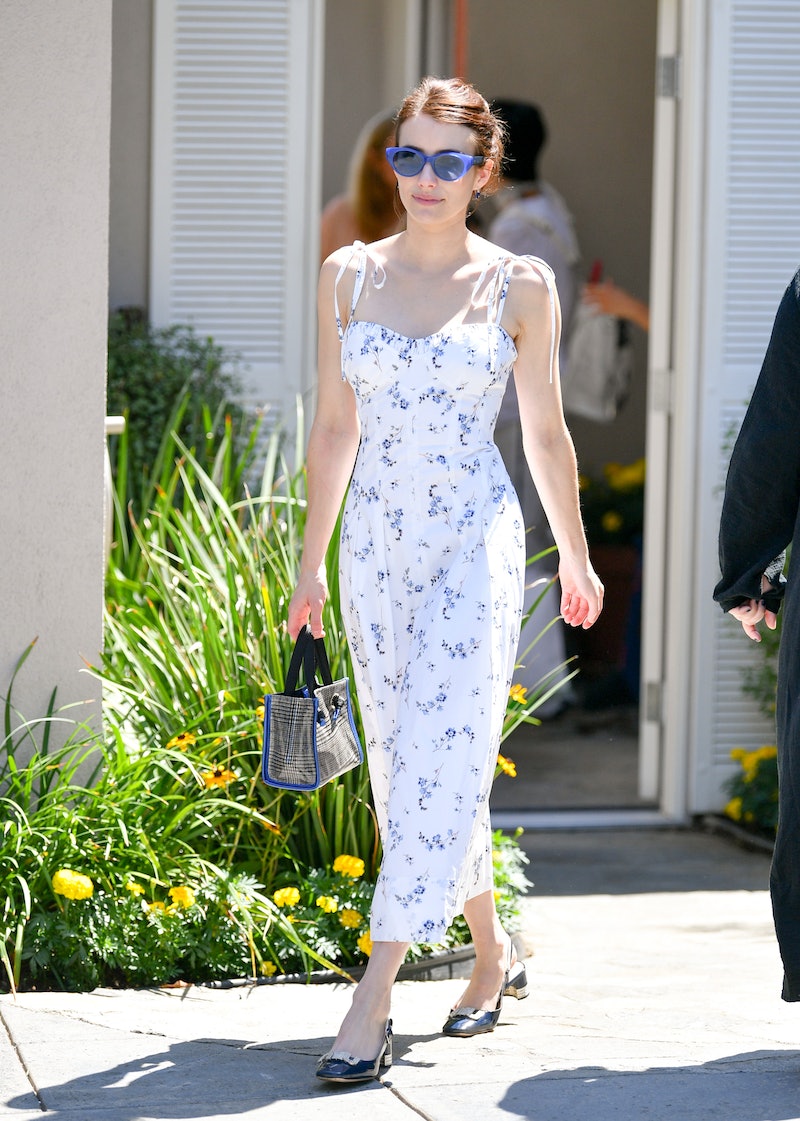 While the world is quickly moving into its sixth month of self-isolation and working from home — adjusting for new (and safer) practices along the way — Emma Roberts is preparing for another new experience: motherhood. The actor confirmed the news on Instagram on Aug. 30. And just as you would expect — considering her penchant for classic, feminine style — Emma Roberts announced her pregnancy wearing one of summer's trendiest looks.

The American Horror Story star posted a photo of herself and her growing bump at home with the caption, “Me…and my two favorite guys.” The actor not only officially revealed that she’s expecting her first child with partner and fellow actor Garrett Hedlund, but that the pair are expecting a boy. Roberts tends to favor classic, romantic pieces — sharing photos to Instagram in floral dresses and balloon-sleeve tops. In her first photo showcasing her bump, Roberts wore the Atlanta Linen Dress by Sleeper, which is available for $320. The actor kept the rest of her look understated, only accessorizing with simple hoop earrings. Roberts wore a pink checkered dress from the same brand in July, another look that plays into the romantic, relaxed cottagecore trend that has become a must-try during a summer spent at home.

Roberts also isn’t the first star to sport the cult-favorite and celebrity-approved loungewear brand during pregnancy. In May, Lea Michele — who gave birth to her first son earlier this month — posted a photo of herself wearing the same dress in white. Of course, Sleeper isn't only a popular choice for expecting mothers. Stars like Karlie Kloss, Chrissy Teigen, and Dakota and Elle Fanning have worn the brand, too.

Between Roberts’ pregnancy announcement and Gigi Hadid’s iconic maternity shoot — as well as the arrivals of Michele’s and Katy Perry’s babies — 2020 is quickly becoming a notable year for new family additions in Hollywood. If you’re an expecting mother and want a look like Roberts’, or you want a chic and breezy dress to wear for the rest of summer, scroll down to shop her dress and similar styles below.