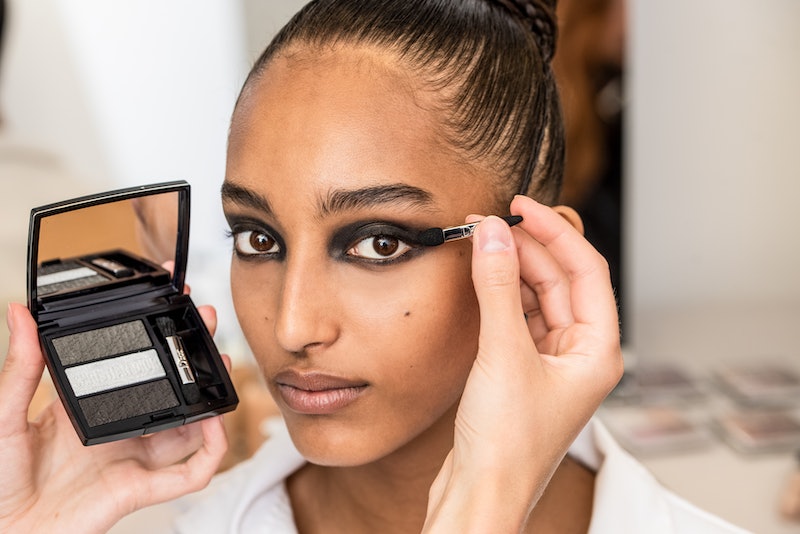 For the past 72 years, Dior has proven to be an unwavering fusion of simple and chic, especially when it comes to its runway beauty looks. The hair and makeup for the Dior Fall/Winter 2019 Haute Couture show was no different. With makeup by Dior Beauty Creative and Image Director Peter Philips, and hair by Guido Palau, the beauty looks seriously stunned — even under the backstage lights. Even better, this show was gearing up to be an emotional one, as it was staged at Dior’s atelier and flagship store on Avenue Montaigne, which is being completely restructured. (The good news: Despite the changes, the store's iconic facade will stay the same.)

Back to the makeup: Philips went for a black smoky eye and natural-looking skin. “The makeup is a very traditional, classic haute couture makeup look. It’s a smoky eye,” he tells me backstage. “Beautiful on every woman, every girl — no matter what the skin tone is, a smoky eye always works.”

He says that the look came about because Dior Artistic Director Maria Grazia Chiuri loves a black smoky eye (if you need proof, check out the graphic black eye from Fall/Winter 2019 and the stunning one tone creation from Cruise 2017). He got her one of the Tri Oblique eyeshadow palettes in 053 Smoky Canvas customized with her name stamped into it, instead of the Christian Dior namesake that traditionally adorns each one. She had actually been thinking about using that palette for the Haute Couture show, Philips notes, and the gift solidified her choice.

Chiuri, who's often seen wearing a smoky eye, typically prefers a much harsher looks than the one Philips created for the show — more grafico, as he describes it. He wanted to give the smoky eye more of a softer edge, so he didn’t use mascara, he tells me backstage. “Because if you do a smoky eye, when you apply mascara, it becomes more about seduction and it’s more sexy,” he says. “If you use no mascara, it becomes more poetic, because you take the harshness out of it. It’s all about the blending, but it still stays strong because it’s black.”

To get the perfect soft smoky eye, Philips likes to use a primer underneath, like the Flash Luminzer. He put it all over the eyelids because the product has a very fine texture. He likes this one in particular because it makes sure that the eyeshadow powder is applied evenly with no blotches, and you can easily blend it. “If you make a mistake, you can easily fix it. Just tap in a little bit of that product, blend it in, and put your powder on top of it. It’s very easy to manipulate," he advises.

Though a black smoky eye is a staple in every makeup artist’s arsenal, the application technique that Philips utilized is a little different. “I push the black shadow into the lash line with the sponge applicator [from the palette] — I guess I’m one of the few who actually likes to use that,” he says.

“I push it into the roots of the lashes and just blend it out. Because I want a softer edge, I would never apply the shadow [with the brush pointing up toward the crease], but I do it [with the brush pointing at the lashes]. I start at the lashes and pull the shadow up so that it blends out better. That’s actually something that I had to tell all of my assistants, because many of them would apply the powder [with the brush pointing upward]," he notes. "But if you do that, you’ll always have the harshness on the edge. Then it’s all about blending. For some girls, I applied a black kohl liner if there was too much of a gap with their waterline. After the blending, I take the sponge applicator and push some powder into the inner corner and outer corner of the eye. It adds more dimension, and it doesn’t become flat.”

For the complexion, Philips decided to go with a very natural look, prepping the skin with the Backstage Face & Body Primer to softly even out the skin and blur out imperfections, but still leave the skin glowy. It matches most skin tones because it has a bit of a peachy tint, which is great for brightening, according to Philips. It’s really great on dark skin because it doesn’t make the skin ashy. It has a beautiful texture, and it’s a good base for the foundation. He used the Backstage Face & Body Foundation to get the same skin tone as the neck and cleavage. Because the models all wore veils in the show, Philips didn’t want to add anything extra to the face; there’s no highlighting or contouring. “It’s just beautiful, natural looking skin with the soft smoky eye,” he marvels.

As for hair, Palau, a Redken ambassador, also decided to keep things relatively simple and classic. “We went with a sort of classic chignon, but we made it feel younger by putting these [two tight French] braids on the sides of the head,” Palau explains. “It makes something that’s very classic a bit more youthful, and a bit more desirable, in a way. It’s amazing how braids can change the concept of the smart chignon or knot.”

To get the beautiful ballerina bun, Palau started with Redken’s Satinwear, which is a blow dry lotion, to help smooth all the hair out and pull it back into a tight ponytail. With Braid Aid, a paste that helps lock braids in and become less slippery, he braided one section on each side of the head. He then braided one section of the ponytail to wrap around the chignon. Then to finish it off, he used Forceful 23 Super Strength Hairspray to keep everything in place.

“What I love about Maria Grazia Chiuri is that there’s always personality, and there isn’t just one uniform look,” he says. “There are also some girls with scalp braids [cornrows], some girls with natural curls, and some girls with shorter [pixie cut] hair. There’s a bit of drama with the veils and the smoky eyes, but the hair nods to a classicism, but with the help of the braids, it’s a new take [on a chignon] and it feels more youthful.”

The collection was almost entirely black, which amplified the intensity of the Philips’ soft smoky eye, and the tight chignon allowed the focus to stay on the clothes. Grazia Chiuri’s vision completely came to life at 30 Avenue Montaigne, and was the perfect send off to the historic space of the label.

Shop some of the hero makeup products ahead.