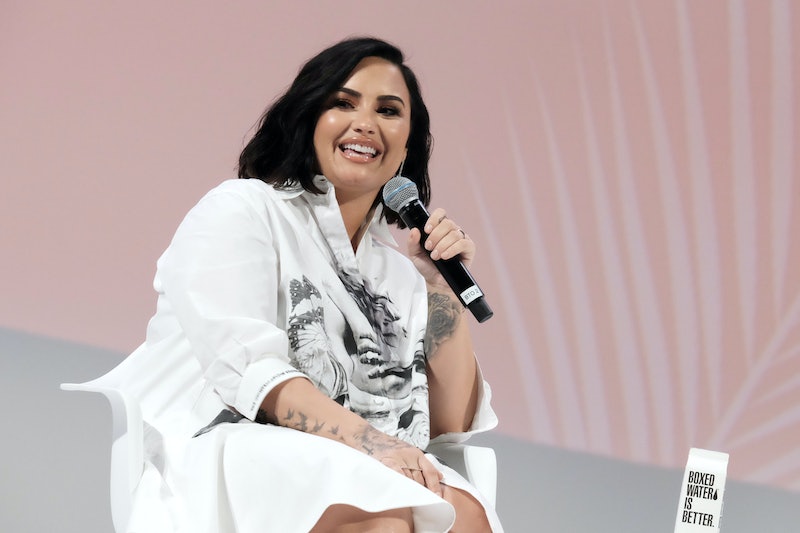 Instagram engagement announcements have their own unwritten code of etiquette. First, you are to never lead into your caption with the phrase, "this weekend, surrounded by family and friends." Second, photographic evidence of the bling is obligatory, but you must — must — accessorize your sparkly new accessory with a categorically killer mani. If you're looking for a precedent, behold Demi Lovato's bright red nails.

The singer announced on Wednesday that after five months of dating, her boyfriend, 29-year-old High School Musical 3 actor Max Ehrich, had popped the Big Question. A series of candids presumably captured moments after the event show the lovebirds nuzzling seaside, hair whipping with the ocean breeze, and — perhaps more importantly — a colossal rock on her finger.

According to Harper's Bazaar, the stone is from Los Angeles jeweler Peter Marco. It's emerald cut in the style of Beyoncé and Jennifer Lopez's engagement rings and looks to be set between two smaller diamonds. Mesmerizing as it may be, though, Lovato's red nails were a not-to-be-overlooked accessory.

Although current nail trends favor bold neons and intricate art (both of which the singer has been known to sport herself), the singer was lucky to have chosen a timeless (though definitely not subtle) cayenne shade for the heavily documented, long-remembered moment. But it wasn't without a bit of modern flair.

In the close-up, beyond the spellbinding stone, you can see that her red nails have a sheerness to them, a possible take on the emerging "jelly" trend. In terms of color, they were akin to Essie's fan-favorite Fifth Avenue shade or Chanel's beloved Le Vernis Nail Colour in Coromandel, a noticeable departure from her usual palette of highlighter limes and yellows.

Her manicurist, Natalie Minerva of Nail Swag, appeared to be surprised by the news, posting a prompt congratulations full of emojis and capital letters. "I HAD NO F***ING IDEAAA these would be your engagement nails and wow I'm LOSING it over hereee," she said.