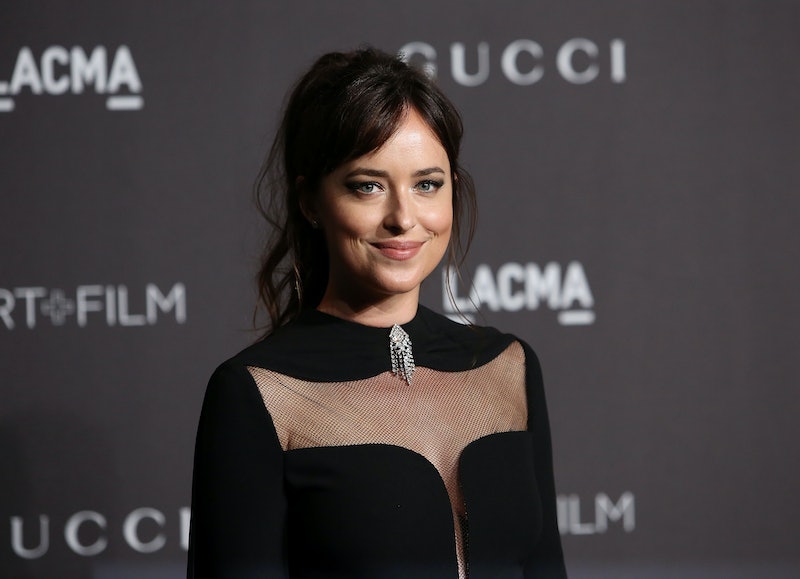 Dakota Johnson's wardrobe for the Peanut Butter Falcon press tour is shaping up to be notably chic (unsurprisingly). After sporting an Alexandre Vauthier LBD adorned with a torso-sized tulle blossom to Tues.'s Tonight Show Starring Jimmy Fallon, the actor opted for something subtler but no less stunning for her appearance on TODAY. Dakota Johnson's tweed skirt suit is as classy as they wore them in the '40s.

The 29-year-old has been monopolizing headlines lately, but not necessarily for the upcoming film she plays in alongside Shia LaBouef. Rather, fans are devastated that the famous gap between her front teeth has closed. On the Tonight Show, she told Fallon that it was actually an accident and that "it will be back."

So, now that we've addressed the orthodontic scare surrounding the loss of Dakota Johnson's tooth gap, let's get back to the real breaking news: that tweed skirt suit.

On Weds., the actor arrived at NBC's 30 Rock set looking like an old-school Chanel ad, thanks to the sleekest skirt and blazer set you've seen in the 21st century. Except it wasn't Chanel at all. In fact, the timeless separates hail from Alessandra Rich's Fall 2019 lineup, a collection of elegant looks inspired by '40s fashion. Johnson's suit fit right in.

A modern take on the classic version, the actor's blazer is cropped to show a sliver of skin above the skirt and featured sharp, pointed shoulders. The wool-blend number features six crystal buttons in front and its matching skirt fit Johnson as straight as a pencil hitting just below her knees.

Tweed is all the rage lately, warranting an entire Chanel runway show back in March and seamlessly working its way into the wardrobes of Queen Letizia, Kate Middleton, Sienna Miller, and even Jennifer Lopez.

It may be steaming hot outside, but this woven wool fabric seems to be treating the fashion crowd just fine. Johnson's set is sold out, sadly, but you can find The Zoe Report's favorite tweed separates ahead.

Adam Lippes puts a 2019 spin on old-school tweed separates with this puffy-sleeved sweater and wrap skirt in elegant navy bouclé.

Get this stunning crop top and maxi skirt set while it's half price. Your fall work wardrobe will thank you for it.

Make this check-print tweed set even more interesting with a pair of tall black boots.

Tweed doesn't get any more summer-ready than this sunny-yellow mini skirt and blazer set.