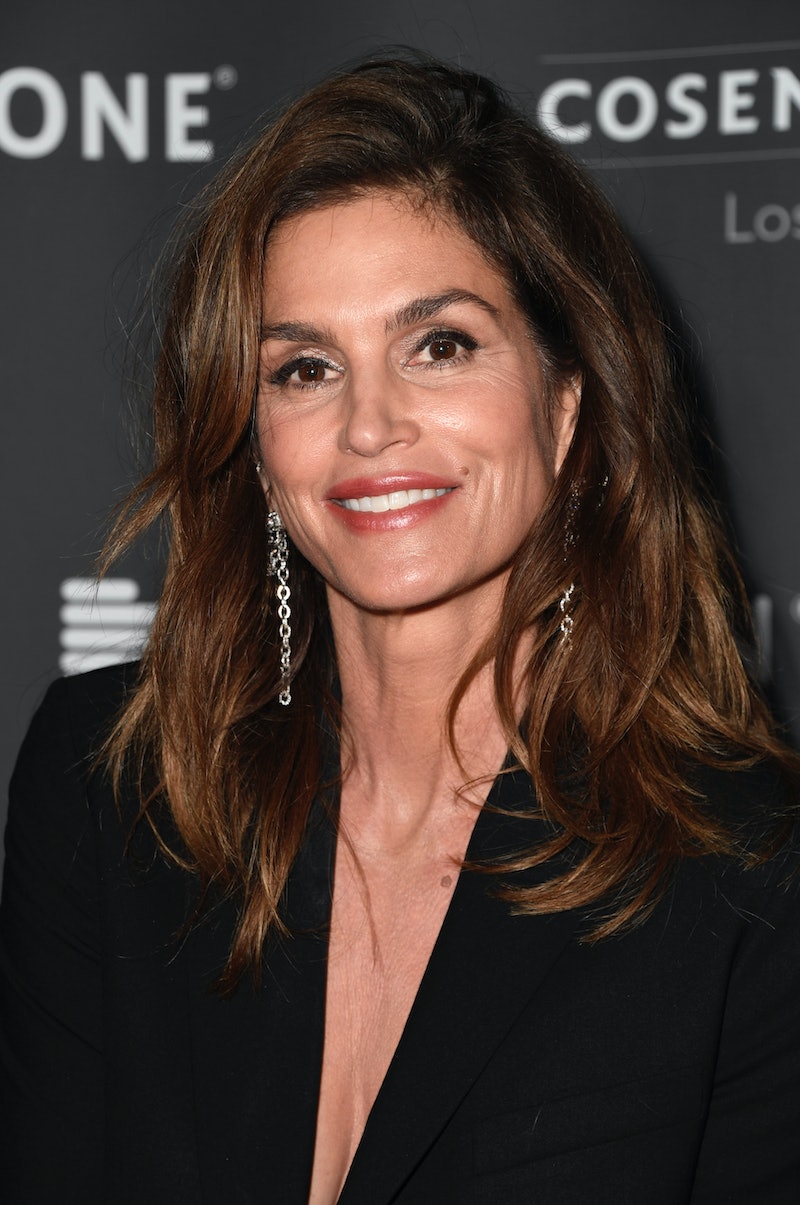 "Ugly" shoes like hiking sandals and dad sneakers continue to maintain their reign in the footwear market. That's not to say, however, that simple styles don't have a place in one's lineup this season (hint: they very much do). Streamlined slides à la Chrissy Teigen, no-frills flats, which officially have Doutzen Kroes' stamp of approval, and barely there sandals, just like Cindy Crawford's, all make a convincing case for minimalism in summer 2019.

Crawford has worn just about every major trend during her time on the runways, but when it comes to her off-duty style, the '90s supermodel takes a fairly nonchalant approach. She spends much of her time in L.A., and as such, she's adopted that effortless West Coast style that everyone seems to want to emulate. Jeans are a mainstay in Crawford's getups, as are easy, breezy blouses, and comfortable yet fashionable shoes.

On Tues., Crawford brought her signature L.A. style to the East Coast. The supermodel was photographed out and about in the Big Apple, getting a bit of shopping done alongside husband, Rande Gerber. For the casual outing, she donned straight-leg, medium-wash jeans, which she teamed with a flowy blue blouse with embellishments on the sleeves.

Crawford accessorized the getup with a light-brown leather belt, a pair of UV-shielding sunglasses, and last but certainly not least, a pair of metallic T-strap sandals that you probably missed at first, but should definitely pay close attention to — they're on trend, easy to wear, and will likely to remind you of a style you used to wear in high school (cue the nostalgia).

The "naked" shoe trend you've come to know and love has evolved quite a bit over the years. First, the barely there style was defined by a PVC upper that made the footwear appear nearly invisible on the wearer. And now the term is used to describe ultra thin-strapped '90s-inspired sandals that still have a semi-naked appeal to them, just like Crawford's.

With summer nearing, there's no better time than now to test drive 2019's naked shoe trend. Do so with The Zoe Report's roundup of the best Crawford-inspired T-strap sandals on the market, below.

Gianvito Rossi makes a mean heel, so it should come as no surprise that he also designed the most perfect barely-there sandals.

These pair-with-everything sandals are a serious footwear steal — and boast a great Cost per Wear. Buy them now for $75, and wear them year after year.

These metallic leather sandals feature a super-delicate front strap and a slightly chunky, rubber-trimmed sole. Style them with your go-to LBD for a night out.

If you prefer something classic, chic, but still edgy, these T-strap sandals from Frye are certain to be a perfect match. They're crafted from smooth leather and feature cool silver-tone hardware.