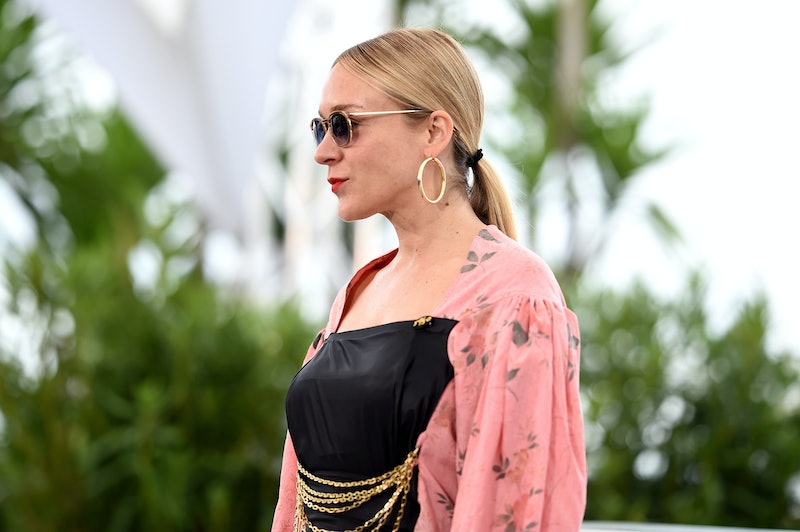 After a whirlwind two weeks spent in the South of France, New York City's perennial cool girl is officially back — and her style game is stronger than ever. Chloë Sevigny wowed on the streets of the Big Apple on Thurs., and as per usual, her off-duty uniform consisted of fresh, of-the-moment staples that were equal parts chic and edgy. The standout pieces in Sevigny’s street-style look were a black vinyl jacket and black loafers.

You can always count on Sevigny to spotlight the latest and greatest in the fashion world. Case in point: The reworked white button-down she donned on May 20 while out and about in Cannes. This time around, she's here to serve up unexpected springtime style goodness in the form of a black PVC jacket that proves outerwear does, in fact, have a place in your wardrobe during the warm-weather season.

Though summer is just a few short weeks away, spring's tricky transitional temps are still lurking around — and Sevigny's latest ensemble is the ideal combo to take from rain showers to sunshine with very minimal effort. The base of the tastemaker's look was a floral-print dress, which ever-so-slightly peaked out from underneath the hero piece: a shiny vinyl coat that's lightweight enough to wear during those 60-degree days.

Sevigny grounded the ensemble with a bold shoe look, consisting of white ankle socks and sleek black loafers. She finished it all off with three essentials every New Yorker always has on hand: a green juice, black sunglasses, and oversized hoop earrings.

Though there are so many style lessons to take from the model's most recent outfit, the one that simply doesn't go unnoticed? Those fashion-forward PVC (and leather) jackets that kept you dry during those pesky April showers should be kept around for a while longer.

If you've already packed away your coats for the season, now might be the time to dig them out again. Better yet, scoop up lookalikes of Sevigny's weightless vinyl jacket, below.

The good thing about buying outerwear in the offseason? It's majorly reduced. This Galvan vinyl trench coat is currently 60 percent off.

Black a bit too harsh for your liking? No worries. Here, a pink vinyl coat feels slightly more fresh and lightweight, but still exudes edge.

Swap your tried-and-true jean jacket for this vinyl number. It's cut from the same classic denim silhouette but topped with a shiny, glossy finish instead.

You don't have to shell out major cash to get your hands on a cool vinyl coat. This PU trench rings in at a reasonable $225 but is currently discounted to $158. Buy now, wear forever.