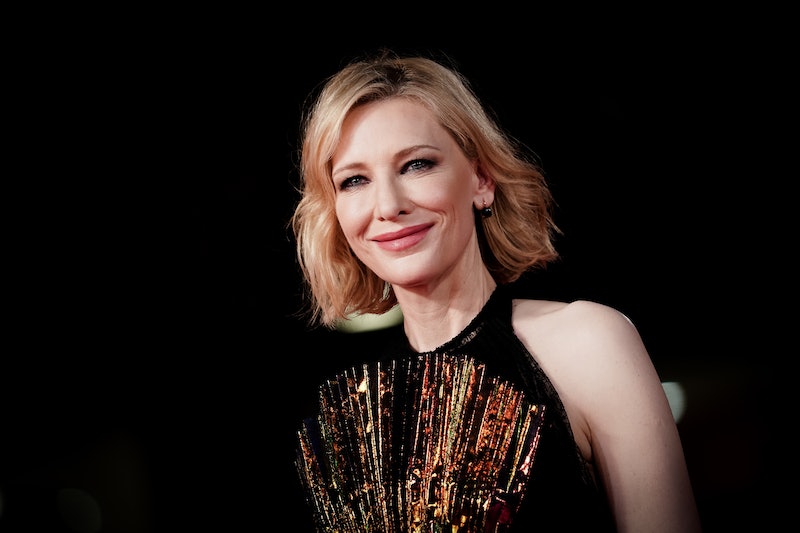 Summer 2019's suit streak just keeps on going — and going. The refined, business-chic set has officially become the most-worn piece of the year, and that's for one distinct reason: the blazer-and-trouser combo is as versatile as ever, meaning it can be dressed up or down in mere seconds. As proof, draw your attention to Cate Blanchett's latest suit looks. The ever-stylish actor donned not one but two equally-chic takes on the pairing that you'll want to emulate right away.

Blanchett is one of those people who can truly pull off anything with utter panache — and she has one of the most wide-ranging wardrobes in the game. From flowy button-down dresses to utilitarian-inspired jumpsuits, the Ocean's Eight actor is constantly changing up her looks, which, in turn, keeps fans on their feet.

Right now, though, Blanchett is playing favorites with suits (she has been for quite a while, but when you reach for the pairing two days in a row, you know she must be a super fan).

On Aug. 11, the 50-year-old stepped out for a private dinner for her latest film project, Where'd You Go, Bernadette at Lincoln Ristorante, looking as chic as ever in a white two-piece set. The pairing consisted of flared trousers and a double-breasted blazer with sharp shoulders and cuffed sleeves. She teamed the set with a sheer blouse and black pointed-toe pumps that ever-so-slightly peeked out from underneath the pants.

On Aug. 12, Blanchett was spotted wearing a suit yet again, but this time, it was a much more casual-cool take on the trend. The blazer-and-trouser combo was rendered in a poppy pink hue and had an oversized fit that gave it a more easygoing feel.

But the true cherry on top of the styling cake was her footwear of choice. No heels were in sight, but rather a pair of crisp white sneakers that took the suit to an entirely new level of cool. Add in the pink-tined sunglasses, a navy-blue tote bag, and her loose waves, and you have what's easily one of Blanchett's most stylish outfits of the year.

As Blanchett's two suit looks demonstrate so well, the pairing is ideal for work and play. When you want a polished take, simply go with a fitted set and elevated accessories, and for a more easygoing approach, reach for an oversized one in a fun color.

Ready to take part in summer 2019's suit streak? Do so by shopping The Zoe Report's favorite sets of the moment, below.

Make like Blanchett and wear this poppy pink suit with white sneakers and pink-tinted sunglasses.

A white suit acts as the perfect blank canvas. Picture this one with cool leopard-print pumps and a bright-red lip.

This skirt set looks so good with chunky sandals and an animal-print handbag.

This Pixie Market suit is the perfect mix of cool sophistication. Wear it with sneakers or '90s thong sandals.