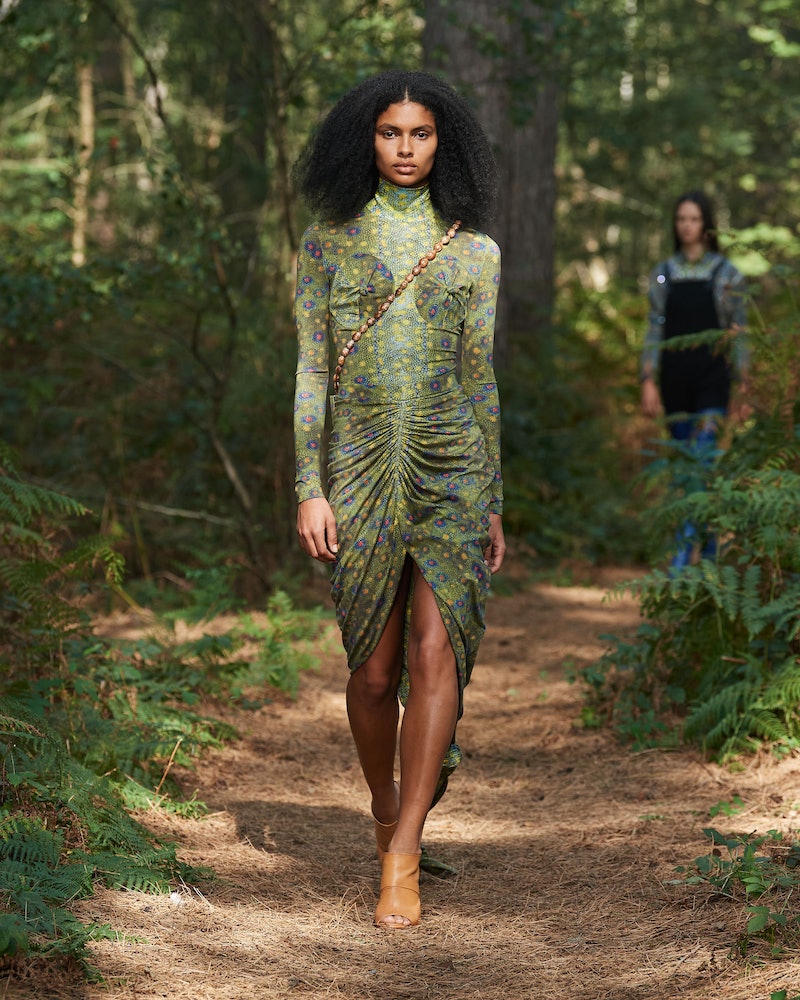 When Riccardo Tisci took the helm at Burberry in 2018, he quickly pushed the boundaries of what the heritage British brand could be. For Spring/Summer 2021, Burberry found a new way to marry the outdoorsman's history of the brand with a modern, imaginative twist. "‘It began with a thought of British summer time," Tisci explained via the show notes. "Embracing the elements with a trench coat on the beach mixing with the sand and the water. I envisioned the people of this space, like the lighthouse keeper, and a love affair between a mermaid and a shark, set against the ocean, then brought to land."

In the midst of the woods, models-turned-explorers marched over pine needles and through bunches of ferns dressed in leather and twill trench coats, hip-high boots, and fisherman hats. The color palette — a mix of mostly white, orange, and bright blue — was not the standard saccharine florals of Spring (though the collection was title 'In Bloom'), but instead a more rugged nod to the outdoors — both land and water. The show notes continue, "womenswear reflects the juxtaposition of the mystical and the natural; strong and delicate, hard and soft, with the elegant details of tulle and chiffon, fishnets studded with crystals, allegorical prints, and artworks."

This season, without the option of a live audience, Tisci chose to take to Twitch to livestream the event, opening first with a conference call hosted from home by friends of the brand Bella Hadid, Erykah Badu, Rosalía, and Steve Lacy. Tisci also tapped artist Anne Imhof to help create an industrial structure contrasting the forested show location that also served as a stage for a live performance by Imhof's frequent collaborator, artist and musician Eliza Douglas.

The result was a circular panopticon, allowing those viewing the show both a look outwards as models approached (many flagged by their own set of suited secret servicemen) as well as the static space within the inner circle where they slowly amassed over the course of the show. It called to mind The Hunger Games or even the dis-reality of The Matrix — the clash of the real and the created. Although in part dystopian, the overall tone was one of hope. In fact, the brand planted 10,000 trees and, for the third season in a row, produced a show that was entirely carbon neutral.

In addition to the disruption of the usual fashion schedule, the COVID-19 pandemic has also led many designers to shift their collections towards two overarching ideas: timelessness and comfort. But, for Tisci, there is no fear of bright, eye-catching design. Included in the collection is shimmering, sheer evening wear, and graphic nautical prints — pieces that may not appeal to the minimalists of the moment, but still capture the energy and spirit of Tisci's youthful reimagining of the heritage brand's lovesick shark included.