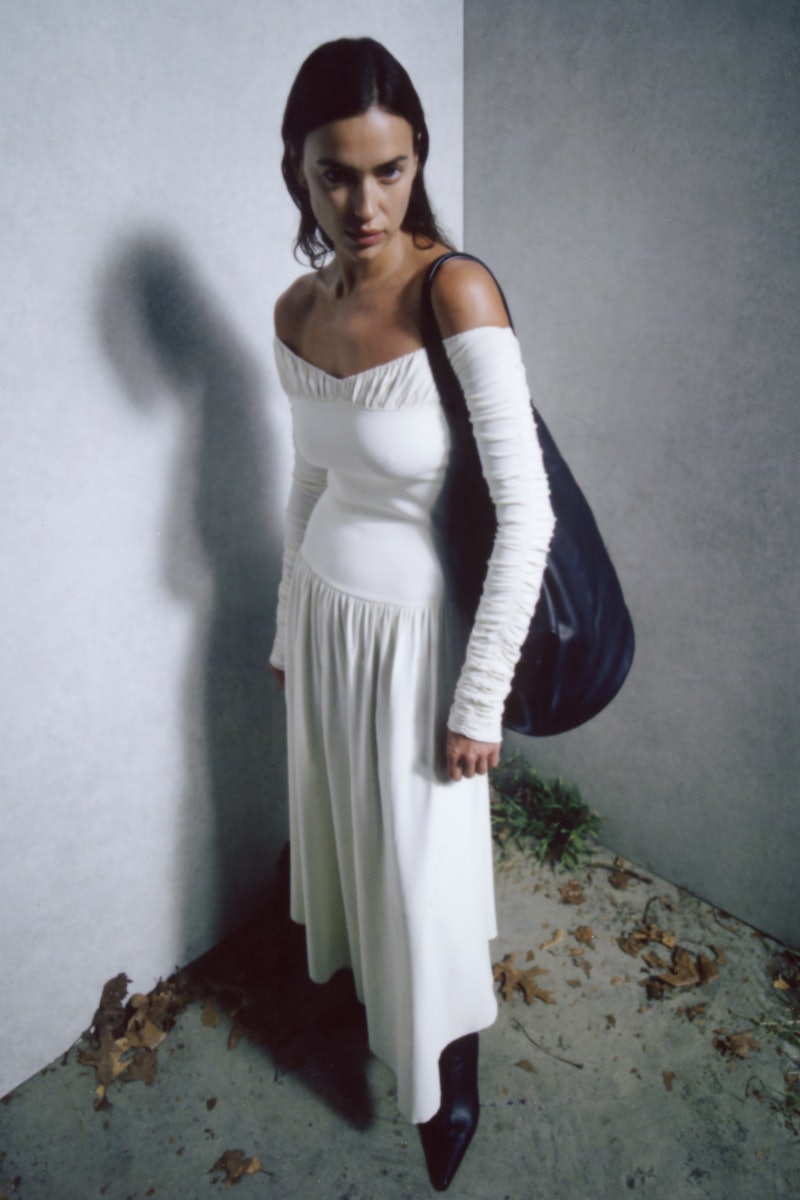 What do you wear for the end of the world? Catherine Holstein doesn't think silk pajamas or bright pops of color are the solution. Instead, for Khaite's Spring/Summer 2021 season, the designer is doubling down on the slick, dramatic dressing that she does best. The palette is minimal, with not much more than ochre suede jackets, sandy crinoline skirts and monochromatic polka dots dresses. But the impact of each piece is palpable, especially when styled against the industrial backdrop chosen as the setting for her latest lookbook and video — the de facto alternative to traditional runway shows this season.

"Spring/Summer 2021 looks to the future through the paradoxes of the present—a time of doom and hope, trauma and rebirth, intolerance and endurance," Holstein notes in the collection's press release. The contrast of puffed sleeves and sharp cutouts, or slick leather and soft ruching play at this paradox, creating a collection that feels both delicate and protective all at once. Holstein revisits many of the things she's known for — impeccable tailoring, modern romantic dresses, and of course the classic leather jacket. But, this time around even the most unsubtle looks she's offering up are created through the lens of the modern shopper. Yes, you can buy an evening dress — but the ruching and stretchy fabric make it a more comfortable iteration. And while last season explored new colors and prints, this season returns to a more subtle, and as such, timeless, play on her aesthetic.

Worth noting this season are the accessories that punctuate the collection. Though often, the focus — especially during her NYFW shows — is on the clothing itself, the shoes and bags of the upcoming season are both ushering in a new era of trends. After seasons of micro-sized shoulder bags, Khaite is co-signing the oversized tote, offering one big enough to likely hide the wearer inside. The label is also designing a series of structured top handle and clutch styles with a sleek, vintage appeal. As for footwear, this coming season, the label is eschewing the current obsession with chunky sneakers and instead offering a series of more minimalist options including strappy, square-toe sandals, pointy-toed slingbacks, and slick above-the-ankle chelsea boots. The single punctuation of color this season is a pair of silk magenta heels.

In addition to releasing a lookbook in lieu of a traditional runway show this season, Holstein also tapped the photographer Hanna Tveite to create an accompanying film that embodies the sense of discord and drama that accompanies the collection. Starring Irina Shayk, Alek Wek, and Abby Champion, the piece contrasts the soft elegance of the clothes with a sharp discomfort of spotlights, shadows, and a stark cinematography. As it explains in the show notes, "time is elastic as boundaries dissolve between the observer and the observed. Chaos flickers to comfort and back again. Sculpted textures are illuminated and then plunged into shadow. Monochrome mastery is punctured by flashes of warmth and skin. Suspended in a web of discordant melodies, reflection becomes resolve, and surveillance approaches the sublime." For followers of Holstein's refined edgy-meets-romantic aesthetic, it's a collection for modern times that is sublime indeed.