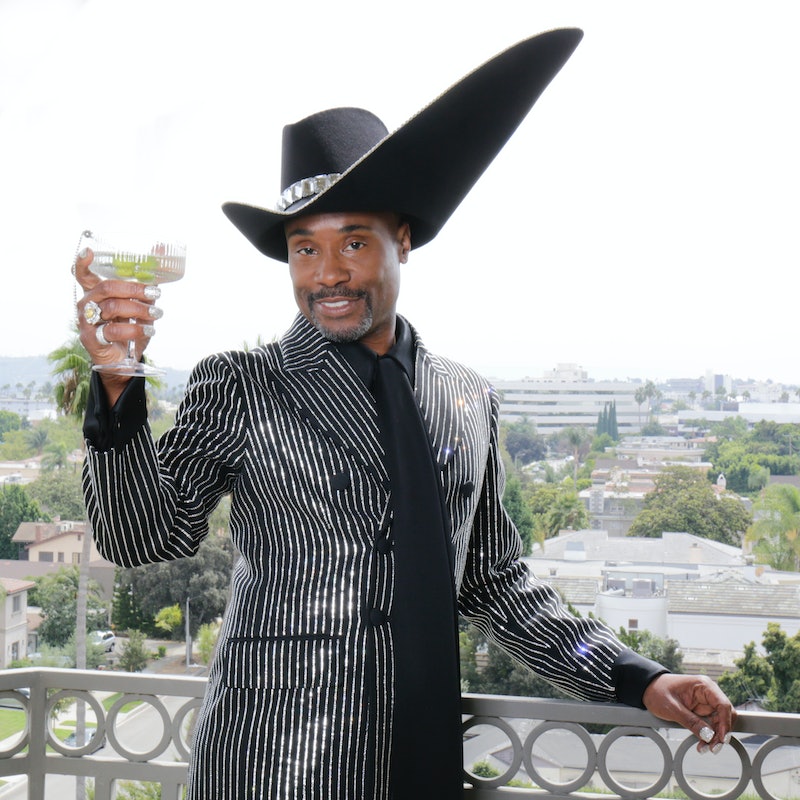 If the red carpets he's graced over the last year were any indication, the man who portrays Pose's beloved Pray Tell knows how to make a statement. That said, it wasn't a surprise to anyone that Billy Porter's Emmys 2019 look was — as his character often says on screen — "Tens, tens, tens across the board!"

The former Broadway darling, formerly best known for his Tony award-winning role of Lola in Kinky Boots (and his spontaneous, now-viral performance of "Everything's Coming Up Roses"), first captured everyone's attention as someone to watch on the carpet when he showed up to the 2019 Golden Globes in a floral embroidered suit and fuchsia-lined cape by New York-based designer Randi Rahmtk. And not only was the look itself quite groundbreaking both in its glamour and boundary-pushing androgynous style (which has now become his signature), but the way he worked it on the carpet was on par with the best moves seen in his show's legendary balls.

Porter followed that jaw-dropping moment up with the striking Christian Siriano-designed tuxedo gown he wore to this year's Oscars. And in May, his epic gold winged catsuit by the Blonds was one of the most buzzed-about fashions at the Met Gala (Made even more memorable by the fact that he was brought in by an army of shirtless men). Given this track record, it's safe to say the man knows how to make an entrance, and his look at the 71st Emmys was certainly no exception.

While he opted out of a gown for this particular occasion, his silver pinstriped Michael Kors Couture suit was still serving all the drama you'd expect from Porter. The Emmy nominee, who collaborates on his dynamic looks with stylist/creative director Sam Ratelle, accessorized the suit with a sculptural, bejeweled hat by milliner Stephen Jones and platform Rick Owens shoes.

Porter wasn't the only Pose star to shine on the Emmys carpet in a major way. His costars MJ Rodriguez (in Jason Wu) and Indya Moore (in custom Louis Vuitton) were also head-turners. And the show's potential to take home a trophy wasn't the only cause for celebration: the nominated actor turned 50 on Saturday. Given his notorious talent and growing reputation as a fashion maven, this year seems to mark a major turning point for Porter's career and he's poised for big things on the horizon. And with any luck, that includes many more iconic red carpet ensembles to look forward to.