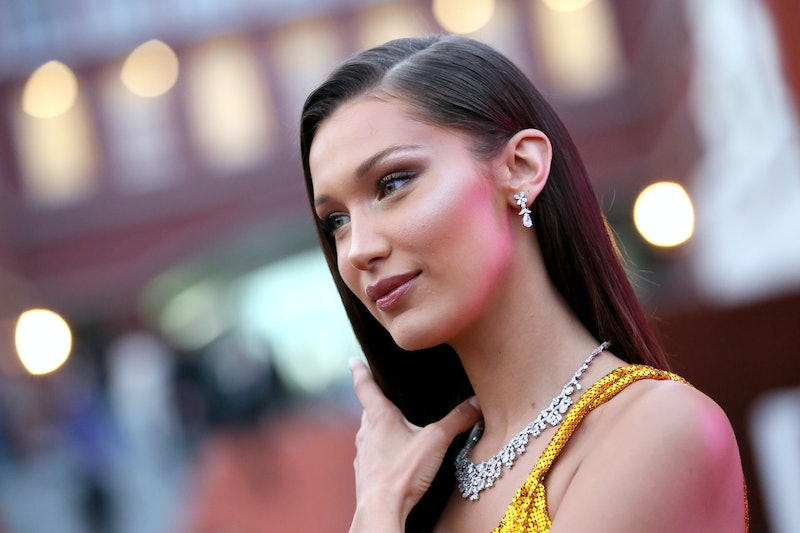 It's official: 2019 is the year of the wispy, piece-y fringe, and Bella Hadid's long bangs are the latest proof. That's right, the youngest Hadid sister just followed Kendall Jenner's lead and debuted a fresh set of bangs on Tues. that are, in a word, perfect. Prepare to call your nearest salon, because one look at the model's new retro-leaning hairstyle, and you, too, will want to rock fringe this season (and beyond).

It's truly been an exciting hair week, with two brunettes known for their sleek, middle-parted cuts officially jumping on the bang bandwagon. On Mon., Jenner posted a selfie on her Instagram that showed off her major hair makeover — choppy, wispy, brow-grazing bangs — with the caption, "yes, no, maybe so?" alluding to the fact that they may only be temporary. Just a day later, Hadid revealed the exact haircut at the Jump Into Spring: MICHAEL Michael Kors launch party. Imitation is the sincerest form of flattery, right?

Hadid is no stranger to bangs, having rocked the forehead-covering style quite a few times already — to varying degrees, of course. She's swept them to the side, tried out baby bangs, and even donned a super-blunt, clip-in set at the 2017 CFDA Awards. But Tues. evening's fringe may just be her best yet — it's perfectly wispy and lightweight, with longer, face-framing pieces on each side.

Though it's still unclear whether Hadid's new bangs are permanent or just temporary, one thing's for certain: They work so well with her super-sleek, shiny hair. As for the mastermind behind the new 'do? More likely than not, it's celebrity hairstylist, Jen Atkin, who was also responsible for Jenner's fresh fringe.

There are so many different types of bangs, but Hadid's are easily the most low-maintenance of them all. They don't require quite as much commitment as a thicker, blunt set, which need constant upkeep to prevent them from looking too unkempt. The model's fringe, however, looks better when it's a little messy and tousled.

So, if you're ready to jump on the bangs trend and want something easy and unfussy, consider following the model's lead by opting for a wispier take. Below, shop The Zoe Report's favorite products to achieve a piece-y, feathery fringe à la Hadid.