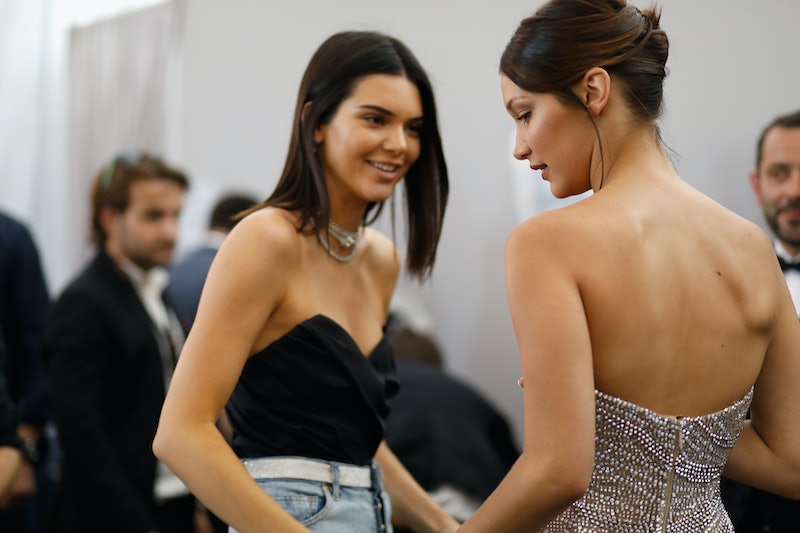 No decade has influenced 2019's fashion scene quite as much as the '90s. Sure, the '80s and '70s have been experiencing a renaissance this year as well (here's looking at you, tie-dye tees, fanny packs, and wide-leg pants), but those nostalgia-inducing staples of the '90s are proving to be the most popular of all — especially among the model set. From thin-rimmed sunglasses and leather trench coats to oversized hoops and chokers, Kendall Jenner and Bella Hadid's wardrobes are chock-full of all the classics '90s babies are sure to remember fondly — and they just took two out for a spin in Monaco.

For the past two weeks, the French Riviera has been a major source of fashion and beauty inspiration, thanks to the ultra-glamorous 10-day affair that is the Cannes Film Festival. The red carpet definitely had its fair share of can't-miss moments, like Margot Robbie's bohemian-chic braided hairstyle and Elle Fanning's '50s-inspired outfit that took a whopping 450 hours to make (yes, really). But the off-duty getups that continue to make their debut in the South of France are just as worthy of mention.

Jenner and Hadid have been parading around Cannes the past few days, and, as per usual, their style game has been on point. Over the weekend, the two were spotted yachting around Monaco whilst dripping in diamonds from Paris-based brand, Messika — a jewelry label that also counts likes of Beyoncé, Olivia Culpo, and Lupita Nyong'o as avid fans.

Jenner seemed to fuse two decades into one for her most recent Monaco outing, reaching for a gold, shimmery jumpsuit from the Tommy Hilfiger x Zendaya Spring 2019 collection. The one-piece harked back on '70s disco days, while the model's extra-large hoops (complete with a pavé diamond pendant center) channeled the '90s to a T.

Both Jenner and Hadid sported tight topknots that put their dazzling jewels on full display and opted for simple, understated makeup in the form of glossy lips. Well done, ladies.

Although you won't be able to get your hands on the exact jewels the models wore while yachting, the market is chock-full of plenty of similar picks. Ahead, shop The Zoe Report's roundup of the best hoops and chokers on the internet right now, all of which are sure to infuse your outfits with the perfect dose of '90s edge.