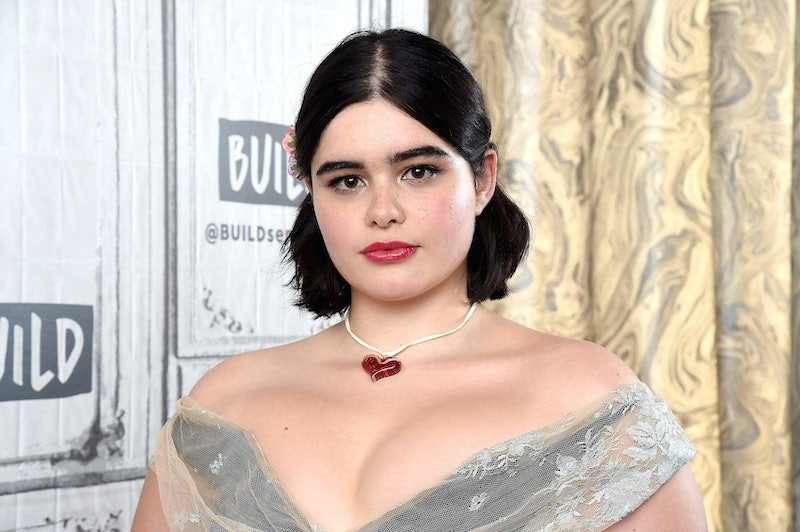 Paris Fashion Week runways may indeed be favoring '90s-era makeup (thick, black liner, deep side parts, barely-there brows, and so forth), but some attendees seemed to have taken the throwback beauty memo a decade further, even. Blue eyeshadow is about as '80s as it gets and Paris' front rows are seeing no shortage of it. The latest: Barbie Ferreira's teal eyeshadow at Givenchy's Fall/Winter 2020 show, guaranteed to be the most high-fashion lids you'll see all day.

If there's even a miniscule part of you who still adores The Go-Go's as much as you love an absurdly oversized scrunchie, then you must be downright giddy over the latest hues to consume the beauty industry. Bright blues, Pacman yellow, hot pinks, and purples, all as synonymous with the '80s as Rubik's cubes and neon color blocking.

The iconic '80s eye (somebody trademark that already!) has been gearing up for a comeback for at least a year now, but PFW is proof that Smurf-colored lids are officially back in style. Among the ones sporting this fierce makeup trend are Bella Hadid, Maisie Williams, Williams' boyfriend (that's right, a couple's rendition), and Barbie Ferreira, who rocked arguably the fiercest blue cat-eye of all.

The Euphoria actor attended Sun.'s Givenchy show in head-to-shin black-and-white florals and a tangerine bag as bright as her teal eyeshadow, which just so happened to match her knee-high sock boots (precisely the ones her dress was styled with in Givenchy's Pre-Fall 2020 lookbook).

The bold hue decorated the inner corners of Ferreira's eyes and reached up to the tips of her brows in a cat-like winged shape. Makeup artist William Scott — who has in the past bedecked the actor's eyelids in 360-degree highlighter green, highly-pigmented papaya, and rainbow pastel negative-space cat-eyes, if you could possibly imagine such a thing — was behind the Madonna-esque look.

You can expect a lot more where that came from, too. Take Paris Fashion Week's approval of '80s makeup as your cue to stock up on blue eyeshadow as soon as possible. Some shadows and teal-including palettes to get you started, ahead.