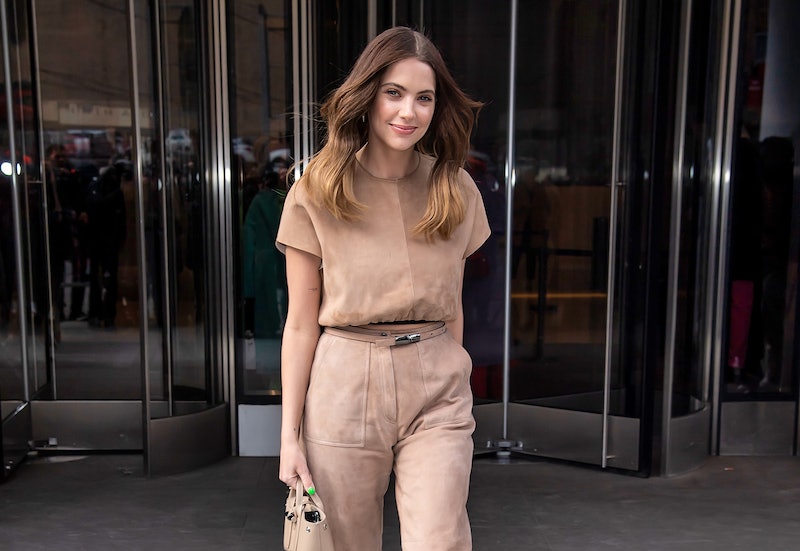 If there were a competition to see who could effortlessly channel girl-next-door and Trinity from The Matrix vibes within two weeks of each other, Ashley Benson and her hair styles would be winning right now. After a quick foray with waist-grazing locks, the actor has recently opted for a *much* shorter — and even sleeker — look. At the Boss Fall/Winter 2020 show on Sun., Ashley Benson slicked back her short brown hair, and it's a cool-girl look worth copying.

For those that might have missed Benson's first change up: she debuted long, chocolate tresses at Michael Kors on Feb. 12 that were such a dramatic change to her usual style, the actor barely even recognized herself, according to an Instagram story. But while that look was sweet and demure with a classic style and turtleneck to boot, her latest 'do was all about edge.

The slicked-back style might conjure dog-caught-in-a-rainstorm images, but when done right, it oozes confidence and is effortlessly cool. And obviously, Benson's was done right thanks to stylist Martin-Christopher Harper. He used Wella Hair products (exact ones unknown, but it's probable that the Shockwaves Extra Strong Wet Look Gel played a role) to give the style a wet effect and a strong side part. Then, he slicked it back and tucked it away at the nape of Benson's neck.

Benson's sleek and sophisticated hair sat front row at the Milan-based fashion show and complemented her white trench dress (from Boss, of course) while her peachy and rose makeup softened everything out. The total look ends up giving aforementioned serious Trinity vibes — just swap that white jacket for a black one and she's ready to save the world alongside Keanu Reeves.

The only thing that made this look even better? Partner Cara Delevingne in hand, with an equally sleek hairstyle to boot. If you have no partner, no worries; the hairstyle is still worth saving for the next time you want to add a little edge to your look.