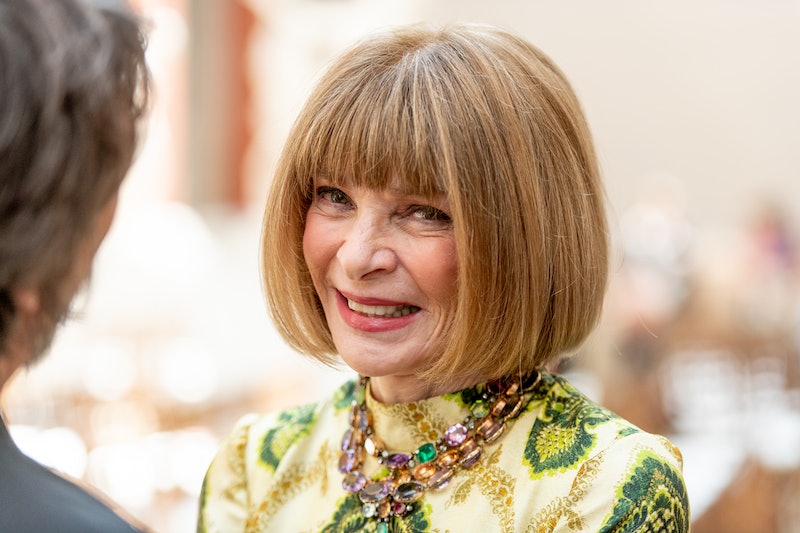 Fact: Anna Wintour has her style signatures. She's rarely (if ever) spotted sans sunglasses. She's sported her signature bob with bangs for years. And the fashion powerhouse has a tried-and-true uniform she constantly wears. Yep, Wintour's Fashion For Relief look was about as Wintour as it gets — but this time around, there was a bold, of-the-moment twist that you might not have expected from the industry icon.

New York Fashion Week wrapped up with a bang on Sept. 14, with many industry professionals immediately jet-setting off to the next fashion month location: London. More specifically, many raced to attend what's easily one of the biggest, most-buzzed about gatherings of London Fashion Week: Naomi Campbell's Fashion For Relief show, which shut down the British Museum in Bloomsbury on Sat. night.

On Sept. 14, Wintour took the London streets by storm prior to arriving at the annual Fashion For Relief show. If you follow the editor-in-chief's style closely, you'll likely know that she's keen to flowly maxi dress sprinkled with colorful florals, which she tends to pair with tall boots or a comfy-chic heel.

This time around, however, her usual dress getup didn't include botanical motifs, but rather a bold leopard pattern. That's right, this particular animal-print trend is officially Wintour-approved — which means everyone will likely be running out to buy a spotted wardrobe staple in the coming days, too.

Wintour rounded out her Fashion For Relief look with strappy yellow heels, a black clutch that coordinated with her thin black waist belt, and her usual shades. Her bob was sleek and shiny, and her makeup neutral and understated. Simply stunning, Wintour.

Campbell's star-studded gathering isn't just an average runway show, but rather a charitable event that aims to raise money for Fashion For Relief, an organization Campbell founded in 2005 that's "dedicated to improving the lives of those living in adversity."

To no surprise, the annual event boasts an impressive guest list — after all, it is hosted by Campbell. And as you'd expect, Wintour is a regular, always sitting front row and always looking the definition of refined elegance. Her most recent look is proof enough, no?

Ahead, shop The Zoe Report's favorite animal-print dresses that are bound to sell out in seconds, especially now that Wintour is on board with the bold fashion craze.

This Self-Portrait number is a great replica of Wintour's. Wear it with everything from chunky boots to sleek, strappy heels.

Come fall, wear this animal-print dress with tall brown (or black, or beige) boots. The footwear options are endless.

Leave it to Alexander Wang to make the coolest animal-print dress on the market. Team it with chunky combat boots for full '90s grunge.