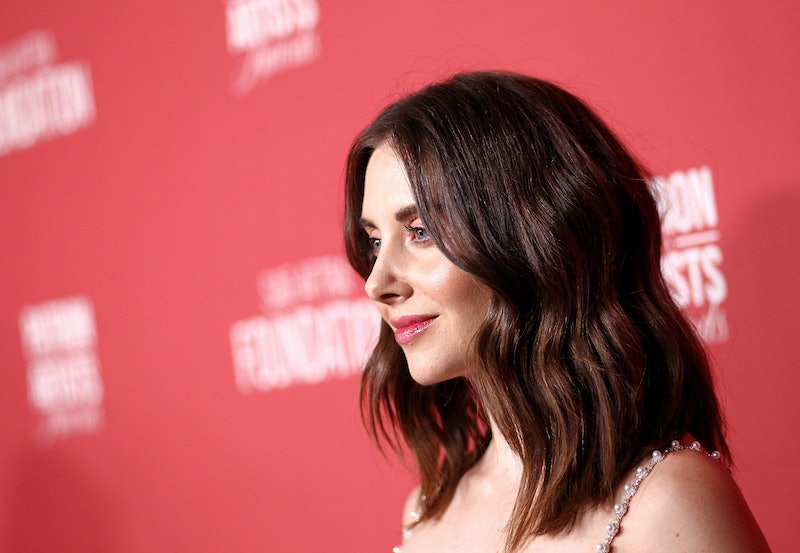 Dreary, cloudy days have officially met their match with Alison Brie's yellow dress, which, undoubtedly, brightened everyone's day on Tues. The actor, who was spotted running around the Big Apple for the kickoff of her GLOW press tour, looked like a true ray of sunshine as she smiled at fans, posed for some photos, and made a seriously convincing case for sporting the lemon-y hue straight away. Striking color aside, Brie's dress further confirmed the staying power of the utility trend, though hers offered up a fresh take on the workwear fashion craze that has taken Hollywood by storm.

It may have been an overcast day in New York City on Aug. 13, but Brie wasn't about to let the weather put a damper on her style. For a busy day of GLOW press stops on Good Morning America and at Build Studio, just to name a few, the actor reached for what's quite possibly the most cheerful ensemble to make a street-style debut this summer: a sunshine-yellow dress that was the definition of workwear-chic.

Brie's dress, which was plucked from Zimmerman's Resort 2020 collection, features all the facets of a classic utility piece, including oversized pockets for that practical flair and a waist-belt with grommet holes. The edgier detailing was offset by a few more delicate elements, like the V-neck, the fluted hem, and the elegant silhouette.

Brie nailed the styling of the dress, too. Though it would look great with a pair of white sneakers or flats, the actor's press tour outing called for slightly more refined accessories. She grounded the look with floral-print Christian Louboutin lace-up heels, topping it all of with a white top-handle bag. She skipped jewels, adding just a swipe of contrasting bright-red lipstick that popped against the yellow base.

With so many A-listers reaching for workwear-inspired jumpsuits and cargo pants, it's easy to think that's all the utility trend consists of. Said pieces certainly make up a large part of the fashion craze, but there are plenty of other options to try — and Brie's dress is one must.

Ahead, The Zoe Report found the chicest utilitarian-inspired dresses on the market. Shop the best of the best, below.

If you don't act fast, this dress will be completely sold out. Picture it paired with chunky hiking sandals and a cool fanny pack.

Lightweight, airy, and so easy to wear, this Eloquii dress is your solution to transitional dressing. Wear it with sneakers, heels, or boots.

This dress may not be in Brie's sunny yellow hue, but it's just as pretty. The sandy color makes it incredibly wearable year-round and the sizable flap pockets and buckled belt add utilitarian flair.

This pretty ASOS find is part of the brand's responsible edit, meaning it's an environmentally-conscious dress you can feel good about wearing.