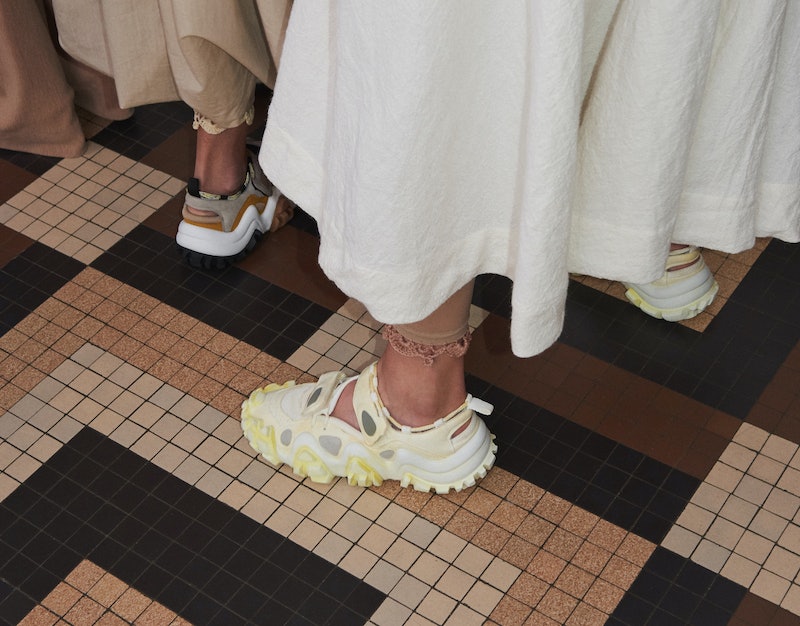 A mere year or two ago, the style set would've turned their noses up at the idea of a chunky, oversized, exaggerated rubber-soled shoe. But time have changed. In 2019 the "ugly sneaker" reigns supreme in the casual shoe space, and designers haven't shown signs of stopping their takes on the style. The sneaker is just so surprisingly wearable, not to mention comfortable, so it's no wonder the fashion world has adopted it with such ease. Now, Acne Studios' Bolzter sneaker is the latest iteration of the shoe trend — and it deserves a spot in your closet this season. Here's why.

During Acne Studios' Spring/Summer 2019 women's collection presentation, there was one style in particular that was hard to ignore: The rugged, heavily textured rubber-soled sneakers that many of the models sported as they strutted down the runway. They're shoes that seem to get more interesting the longer you look at them, changing in appearance from hiking-inspired trail shoes to straight-from-the-future space-terrain wear, depending on the angle you catch them at. And now, they're finally available in two distinct styles that you'll want to snag fast.

Acne Studios' newest shoe, the Bolzter sneaker, officially launched on the brand's website on May 16, finally giving shoppers the chance to recreate the cool looks seen during the fashion house's spring and summer presentation. The shoe, which certainly falls under the category of "ugly sneaker" thanks to its overly chunky sole and utility-inspired details, is up for grabs in two different styles, the Technical and the Open Velcro.

The Technical iteration of the shoe, $540 or $550 depending on the color, is a lace-up style that hones in on a hiking aesthetic with rugged details like pull-tabs at the heel and tongue, a multi-textured upper, and bungee cord-inspired laces. But to give the shoe a more futuristic appearance, Acne Studios added inspiration from '90s raver culture, like pops of unexpected colors and a wavelength-inspired midsole.

Just in time for summer, the brand is also offering up an Open Velcro version of the style that's part sneaker, part sandal. The sole remains the same, while the upper features two velcro straps and open panels on top for a more breathable take on the futuristic silhouette. Sport them with body-skimming separates à la Acne Studios, or use the style to add some edge to flowy, feminine pieces.

Go as colorful, or as classic as you like with the statement-making sneakers, which are available in a range of on-trend shades from white on white to bolder color ways that include shades like banana yellow and bright blue. Some of the styles, like the all-white Technical Bolzter, $550, and the blue Open Velcro, $510, are pre-distressed so they already look perfectly worn in the first time you wear them.

Check out all the different color combinations of Acne Studio's coolest new shoe below, and consider them your opportunity to finally take a chance on the industry's "ugliest" shoe trend.

Yellow's still a trending color this season so slide into these open velcro strap sneakers to give the color a try. Pair them with an otherwise neutral color palette so the shade can shine.

These white on white sneakers come pre-distressed, so they look perfectly worn in from the first moment you put them on. The chunky sole proves the oversized style is still going strong.

Slip into these easy to wear velcro sneakers for running around town, or for a weekend spent at a cabin in the wild. The amber yellow and brown color way looks cool and rich aside similar colors or in contrast with brighter shades.

Neutrals plus a pop of purple in the laces give these shoes a cool city-meets-nature vibe.

Bright blue sneakers seem straight out of the future thanks to an open silhouette with velcro straps.

If you saw and loved the hiking boot trend that started last season but didn't get a chance to try, you're in luck because Acne Studio's new style is certainly trail-wear informed.

The open top on these white on white sneakers means you can sport them even in the height of summer.

The technical look of these sneakers — from the super-texturized tread to the pull-tabs and heavy-duty laces — feels balanced in this pink color way with playful pops of purple.