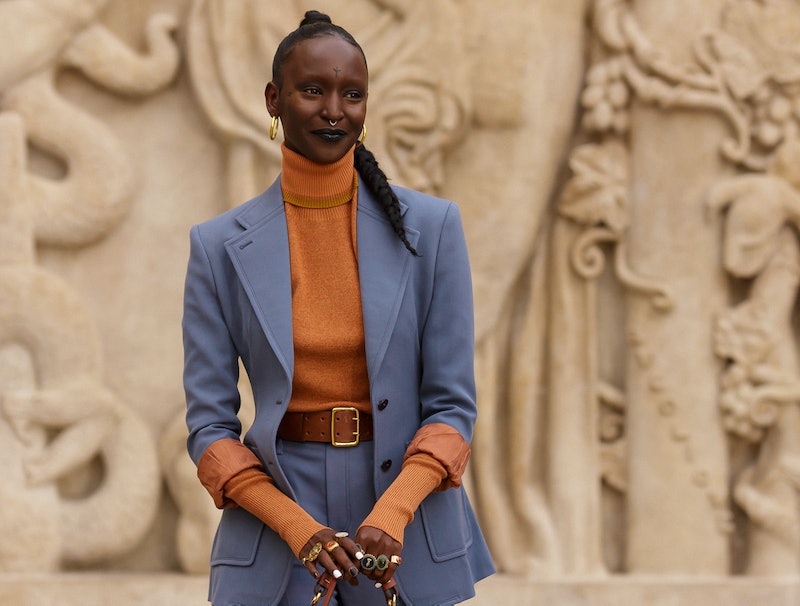 During a year that saw New York Fashion Week go almost completely digital, crowned sweatpants king, and had those who once flocked to sample sales instead stockpiling pajamas amid a global pandemic, the questions arise: Will full street style looks ever re-emerge? Will anyone feel like getting dressed up for shows again? Will photographers still congregate outside? While it’s hard to predict exactly what street style or dressing up will look like moving forward, fashion has always been cyclical, and the industry seems primed for a return to a new era of individuality and focus on personal style in 2021 according to photographers and insiders alike.

“I always thought that street style was really exciting,” says Chloe King, Bergdorf Goodman's digital fashion lead, of her initial take on what would become an industry-wide and pop-culture phenomenon. “It was refreshing to see how people were styling pieces from previous collections. For me, that was almost more exciting than what came down the runway, because it was reinterpretations by people with careers that I really respected.”

When King first gained an interest in street style, around a decade and some change ago, photographers such as Scott Schuman, Tamu McPherson, and the late Bill Cunningham were capturing how models, editors, and buyers dressed not just for the industry’s biannual stretch of shows, but also for themselves. Looks were largely, if not completely, culled from personal wardrobes, and at most a more dressed-up version of what one would wear to the office. “It certainly seemed more natural than it does now,” King says. As time (and Instagram) would tell, Fashion Month dressing soon became much more exaggerated.

“Things were very over-the-top,” says photographer Ashley Gallerani of when she started shooting shows a few years ago. “This was the peacock era [of] feathers and rhinestones and glitter.” While some of these looks made for great street style moments — many of them immortalized in online photo galleries and coffee table books — they’ve at times lacked the authenticity that both Gallerani and Zeng are after when they shoot.

“Sometimes I’ll see people in three to four different outfits a day,” photographer Nicky Zeng says. “They’re wearing what they think people will like instead of what they like.” In these cases, they’re likely wearing pieces loaned or gifted by brands as well, which aren’t always reflective of their personal style.

If eschewing It-pieces in favor of what you genuinely love is what we can expect from street style in the future, then King has long been ahead of the curve. “I first started attending shows during that minimal normcore moment [around 2013] and that’s obviously not me,” she says. “I was pretty self-conscious about wearing eight prints or a giant Comme des Garçons tent coat while everyone else was wearing beige, but it’s who I am.” That approach is one Zeng appreciates. “It’s important to be yourselves and wear what suits you,” she says. I like to see people looking comfortable; I like a mix of brands, or even no brands.”

Though the fashion shows and events that street style photographers have shot over the years are on pause at the moment, Gallerani has noticed some trends that she anticipates spotting when they resume.

“There’s been this really interesting mix of loungewear with streetwear,” she says, “especially if you look at everyone in Copenhagen right now. People are wearing joggers and heels, or really nice knit pants and tops with sneakers. I think [in the future] we’ll see a mix of pieces that are super functional and comfortable, but still cool when someone puts their own twist on them with a cool jacket or handbag.” Whereas some may lean into comfort, others are likely to resume a dressing ritual that they’ve missed.”

“I think there’s a real itch to get dressed up,” King says. “In the beginning [of the pandemic] people were like, ‘it’s so nice to wear sweatpants… I’m cleaning out my closet… I don’t need as much.’ But I think for people who love clothes and really understand the work that goes into creating these collections, they definitely miss that celebratory, ceremonial part of gearing up for Fashion Week. But I do hope they’ll be a shift away from gifted dressing and towards an expression of individuality.”

King also hopes that in light of recent events, people will be more intentional about what they wear. “With COVID came financial hardship, an overdue racial reckoning, and discussions of fashion's contribution to the environmental crisis,” she says. “Being more thoughtful and strategic going forward is essential.” Noting that street style presents opportunities to articulate political statements, give exposure to underrepresented brands, and convey the importance of sustainability, she urges her industry peers to keep that in mind when shows resume: “What better endorsement of who you are and what you stand for than what you choose to put on your body?"