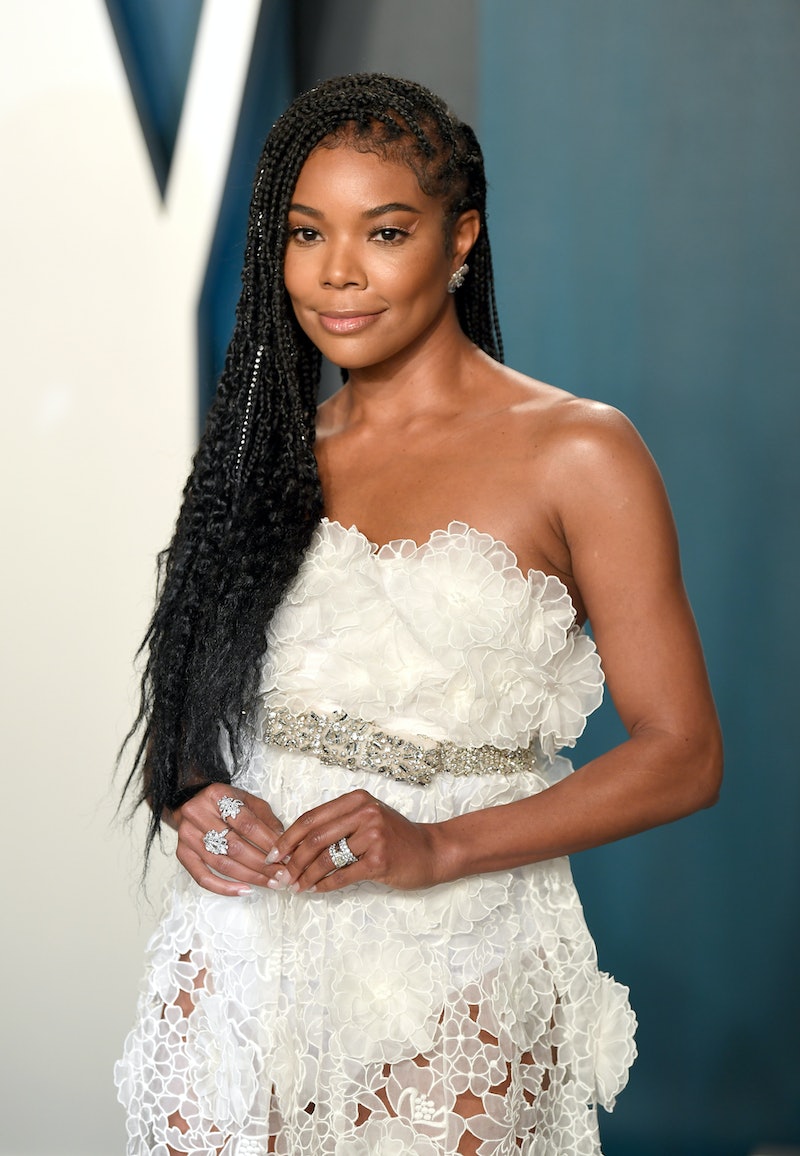 The wedding industry generates more than 60 billion dollars per year just in the U.S. alone, and oftentimes, celebrities are the ones setting the trends. This is especially true with both dress silhouettes and engagement rings, where a single celeb's jewels can ignite a wave of similar styles. Whether you're currently ring shopping or simply bookmarking for your vision board, Gabrielle Union's engagement ring still holds up as one of the most major pieces of jewelry in all of Hollywood.

As with most things, celebrities tend to get first dibs on the newest creations from the worlds top jewelers. Hence, when a newly engaged star sports a brand new rock, the style often spikes in the diamond industry. Such was the case with Emily Ratajkowski's double stone band or Jourdan Dunn's round diamond halo ring, for example. This was definitely the case with Union's headlining engagement to now- husband Dwayne Wade back in 2013.

Made by jeweler to the stars Jason Arasheben, Union's diamond is a cushion cut solitaire held by four prongs on a simple white gold band. The proposal was an adorable at-home show featuring Wade's three sons holding up "Will you marry us?" signs. "I was completely surprised, him and the boys planned it completely," Union told Kelly Ripa and Michael Strahan on Live With Kelly and Michael in 2014. The couple officially wed that year, and later in 2018, they welcomed daughter Kaavia.

It's plain to see: The 8.5-carat diamond, which is valued at nearly $1 million dollars, is a showstopper. While that price tag is, uh, a bit limiting, the timeless shape and elegant design can be recreated for less. Ahead, 10 proposal-appropriate rings on par with Union's style.

Emulate Union's four-prong look but with a unique band. The knife-edge style is a little something different but still subtle and classic.

The buzzy fine jewelry brand has plenty of fun designs to offer but its classic solitaire band is a timeless and reasonably priced addition to your jewelry box.

This floating take on a solitaire stone is just one example of Valerie Madison's original takes on classic designs. Looking for something more original? Don't miss her six-pronged triangle diamond design.

With a knack for unique takes on classic designs, KatKim's 18k gold solitaire ring is a perfectly original style with its pavé diamonds tucked beneath the center-stage rock.

This isn't just any platinum setting: Its diamond is set on a crown-shaped basket which allows light to flow through both sides, making Ashley Zhang's exquisite piece shine even brighter.

If you're eyeing the engagement style but aren't going full proposal yet, you could start with a more affordable promise ring in the interim.

The fine jeweler is known for her one-of-a-kind designs in New York City's diamond district. This gray-blue stone is held by four tall prongs that replicate the extended height of Union's ring.

If Union's giant diamond protrudes a bit too much for your liking, opt for a stone a touch flatter but with a diamond halo to keep the wow-factor.

Elegant, timeless, and so incredibly sparkly, this one will likely be an heirloom that stays in the family forever.

With your choice of center stone, the super thin band of Shahla Karimi's customizable creation makes the cushion-cut rock appear that much larger; you can even choose to mix metals.