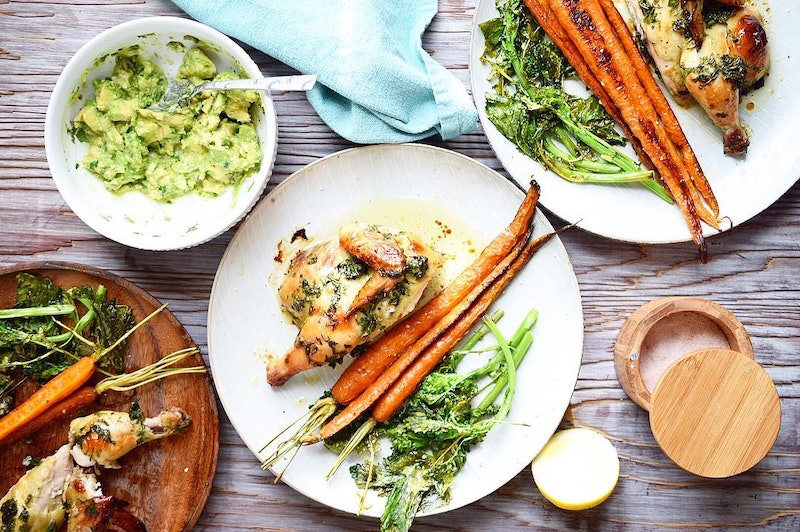 My sister recently texted me that she spent the whole weekend totally smashed because it was homecoming (ah, to be young and in college), and between the smatter of inappropriate things I shall not repeat here, she described it as simultaneously the best and worst time of her life. I've been looking for a metaphor to describe how I felt about doing the Whole30, and that's as apt as any. It's amazing and terrible, all at the same time.

If you haven't heard about the Whole30, here's a quick primer: You eliminate added sugar, grains, legumes, dairy and alcohol from your diet. You eat whole foods like meats, fruits, veggies, nuts and seeds. It's a tough-love program that allows zero room for mistakes or slip-ups.

While I generally eat fairly well, I really wanted to clean up my diet and see if I felt better without dairy and grains. Since I was already eliminating two things I love, I figured I'd go whole hog and torture myself with a Whole30. (Just kidding, it's not torture ... at least, not after the first week.) I'm a masochist like that. (Just kidding again, it's really not that bad ... sort of.) But, looking on the bright side, you don't have to give up coffee.

A breakdown of each day would get pretty boring and repetitive (I ate whole, unprocessed foods and really craved [insert junk food here] times 30), so instead, here's what I learned on my Whole30 journey. If you're embarking on one yourself, these tips really saved me. Also, godspeed.

The first week is the hardest. I maybe wanted to murder my coworkers when they ate bagels in front of me (even though bagels aren't even a thing I normally eat and have been totally fine without for five-plus years). I also had really intense dreams about ice cream (my biggest vice besides pizza). I found that, while it's super important to be prepared at all points during the Whole30, it's most important during the first week because you're still figuring out what you can and can't eat.

The key: Meal prep, meal prep, meal prep. The two hours I spent on Sundays preparing my food for the week saved me. When you're armed with a compliant lunch at work, it's easier to avoid the donuts someone left in the kitchen for no apparent reason other than to tempt your still-adjusting taste buds.

Also, find Whole30-approved snacks you can keep on hand at all times. I am partial to RxBars, which are kind of like Larabars but better because they actually contain protein and aren't just sugar bombs. I also lived on Zupa Noma soups—the Yellow Pepper Turmeric is so tasty—and they're packed with organic veggies.

It's Okay To Embrace The Holier-Than-Thou Feeling

Your feelings of food jealousy will subside, and you'll start to feel a little holier-than-thou when you see people eating—gasp!—processed foods. I know I'm not really supposed to say that and it's definitely obnoxious, but it's the truth. Own your truth. Just don't get offended when your boss tells you to shut up after you spend five minutes gushing about how much better you feel without legumes (#ItHappenedToMe).

But seriously, I found that I stopped being tempted by non-compliant foods because I was able to recognize how sick they made me feel and how much better I felt without them.

One of the things that got me through this process was the fact that it's only 30 days, not forever. Whenever I would feel sad that I couldn't have a glass of rosé, I would just remind myself that I was doing this program for myself and that it was only 30 days. (I also threw in some expletives, because I am one of those people who is motivated by yelling/tough love.)

At the risk of having my boss tell me to shut up again, I felt so good after finishing the Whole30. Not only did I feel accomplished that I spent 30 days feeding my body healthy foods, I also noticed that I was less bloated, my skin looked better (probably, and sadly, from cutting out wine) and I had more energy. It was a good reset to remind myself that what you put in your body matters, and it renewed my focus on getting healthier. I also like the program because it's very black and white about what you can and can't eat—for me, this is useful because the phrase everything in moderation is the bane of my existence. (Who can eat pizza in moderation? Not me.)

So yes, the Whole30 was tough—but so worth it in the end. I strongly recommend.