There’s a reason it’s taken over your Instagram feed. 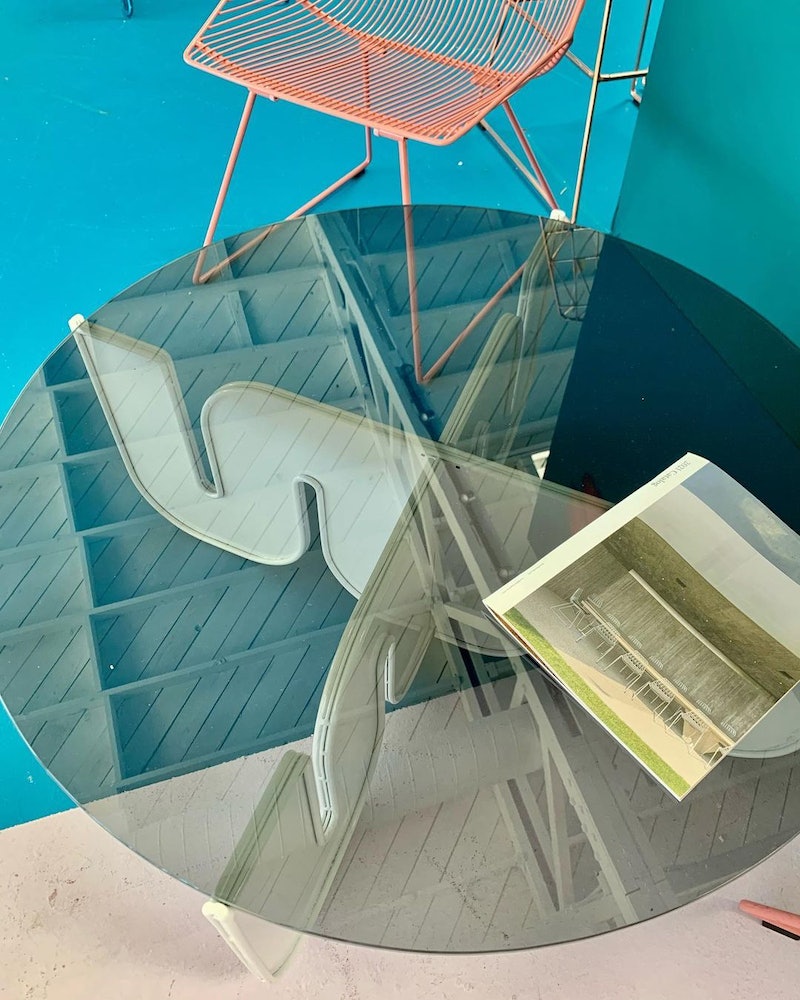 Waves, squiggles, and blobs might be something you’d find in a child’s attempt at drawing — but in 2021, it’s also used to describe one of the most popular design trends of the decade so far. Open up Instagram, a magazine, or the door to an influencer’s home right now, and you’re almost guaranteed to see a curated jumble of funky, free-flowing furniture and decor, whether in the form of the viral pink Ultrafragola mirror or a wavy-handled mug. Architectural Digest dubbed it a trend across the globe. Domino proclaimed it was taking over. And as Vice recently put it, “We need blobs now more than ever.” But with its now-ubiquitous nature, our collective obsession begs the question: Why did these waves and zigzags and squiggles become so trendy in the first place?

To understand it, you need to go back to its start — or its most recent one, at least. Gemma Riberti, Head of Lifestyle and Interiors at WGSN, noted that the stage was set for the rise of squiggly lines as far back as 2015. That’s when billowing waters — an important reference for the wavy trend — started to emerge as an inspiration for lighting, which then made its way into the rest of interiors. “Whether it’s worked into transparency or more solid materials, water ripples bring the fascination for more elemental, natural surfaces to life in intriguing yet soothing designs, and we are now seeing it coming to items such as mirrors, for instance — ‘disrupting’ the reflection and therefore creating more mindful and engaging moments,” she tells TZR in an email.

A year later in 2016, the forecasting brand began tracking a surge in squiggly contours after noting it at shows like Maison&Objet. “We highlighted how sinuous, rippling, and flowing forms were coming to the fore influenced by the advances in digital creation across a broad range of materials, from ceramic to glass, wood, and 3-D printing,” she continues.

From there, its momentum continued to build — and in 2020, demand for the aesthetic started to reach a fever pitch. Now, you can find squiggles everywhere: In the pink Ettore Sottsass mirrors that have become a verified status symbol; in the twisted candles that dot coffee tables around the world; in the wiggly chairs and couches sitting in countless celebrity and trendsetter living rooms. The numbers back up its ubiquitousness, too — there’s been a 28,236 percent increase in searches for wavy candles and a 5,296 percent increase in searches for wavy mirrors on Etsy in the last three months compared to the same time the previous year.

As for the question of why it finally took off? The most obvious answer, of course, points to the pandemic, an event that’s defined nearly every trend of the past 12 months. “People feel more relaxed when surrounded by shapes that are curved or irregular, which could explain why they feel especially drawn to them right now,” Amber Dunford, design psychology expert and interior stylist, tells TZR. “We are collectively experiencing a great deal of tension and anxiety, so it makes sense there is perhaps an unconscious desire to seek out that sense of calm via design.”

According to Riberti, though, the trend provides more than just a calming sensation — it’s also a way to infuse happiness into a home, particularly when paired with soft, bright colors. “There is an essential element of playfulness to keep into consideration: Squiggly and wavy silhouettes have a simple, naive quality to them, especially when worked in pastel hues,” she says. “Organic and soft, inviting and relatable: These qualities make squiggly designs the perfect accent piece to bring up a smile — definitely something consumers are in need of and will be willing to invest in (also because it can be worked at all price points)."

Yet it also goes beyond the sense of joy it provides. As Zoe Cohen, the co-founder of furniture brand Wiggle Room, explains, increased time at home has given people a “heightened desire” to make their spaces look unique. “As of now, these curvy or wavy furniture pieces have mostly been the domain of small businesses and independent designers,” she tells TZR. “Customers want special, unique items, and shopping vintage or small locally-made design runs is a way to do that.”

As “trendy” as squiggles and waves may seem though, Wiggle Room’s other co-founder, Levi Shaw-Faber, predicts they’re not going away — mainly because they were always kind of there in the first place. “We think wiggly design is here to stay because it has already been here for a long time,” he explains. “The super trendy and beautiful wiggly vase by Alvar Aalto was designed in 1936 and Frank Gehry designed his famous line of wiggly chairs in 1972.” Wiggle Room itself gathered inspiration from the past in designing its first table, which was informed by “Brazilian landscape architect Roberto Burle Marx who, in the middle of the 20th century, created curving Modernist landscapes using the native plant life of Brazil,” says Shaw-Faber.

As Dunford points out, these free-flowing shapes were also prominent in the ‘80s, a decade which she says design is bringing back in many ways: “From curved shapes in seating and lighting to line drawing and wavy patterns on wallpaper.” In fact, the curvy trend is these days often attributed to Memphis design movement, which began in the early 1980s.

Brought to life by the Memphis Group, a collective of designers and architects that included its founder, Ettore Sottsass, the movement became known for its signature terrazzo materials, bright colors, bold patterns, and yes, squiggles. In essence, it was a rebellion against the minimalist designs and architecture of the time — a familiar sentiment which hints that this isn’t just a one-and-done trend. Rather, it seems a resurgence of squiggly lines may just signal a craving for less restraint — and in that case, this is far from the last decade you’ll see them.