Get to know this rising label. 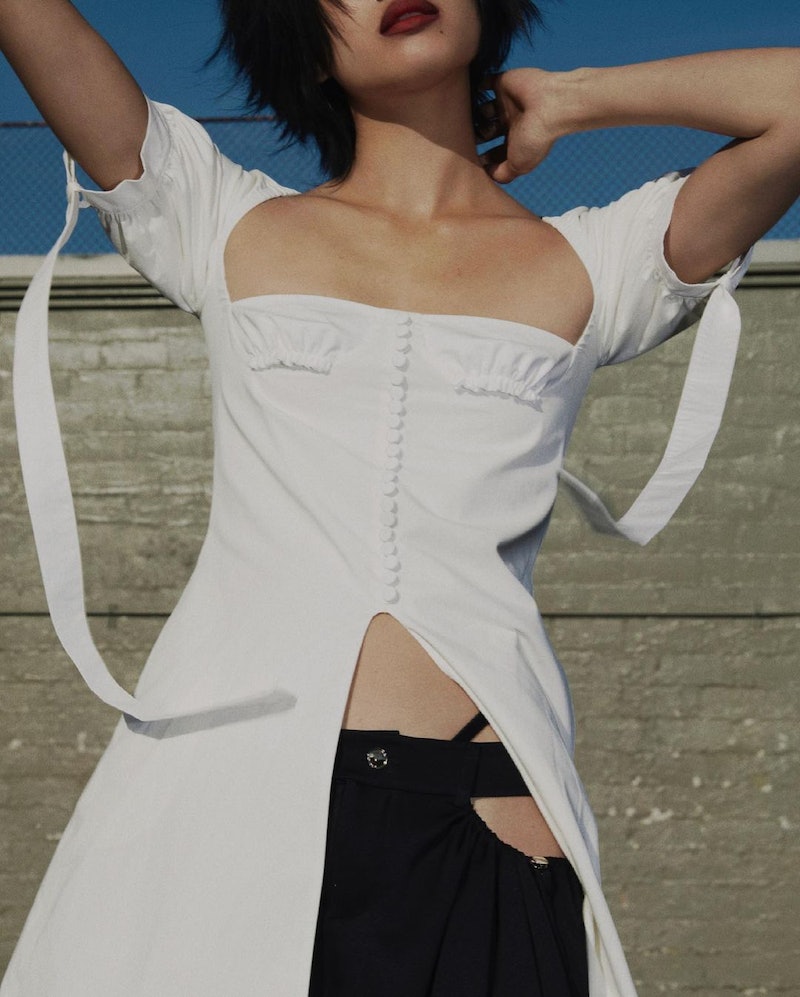 For some, the past year allowed for the opportunity to take a step back and reset. For New York-based designer Taehee Park, it was a complete reboot. “It took the pandemic for me to realize I was completely burnt out,” the founder of up-and-coming label Tae Park tells TZR. “For 10 years, I felt like I was operating my mind and body as a machine, working for others and not for my own benefit.” In search of a chance to allow her value to speak for itself, Park left her job in the fashion industry in August 2020 and launched her brand in November. Though the 29-year old designer admits she went into it completely blind, you probably wouldn’t know as her one-woman-run brand has attracted buzz on social media from influencers like Alyssa Coscarelli, Vanessa Hong, and Lindsay Vrckovnik in just eight months.

Park was born near the ocean in Busan, South Korea, and was brought up as a third culture kid (influenced by her parent's culture, and the one where she grew up) until she entered high school. “I was raised all over South East Asia due to my dad’s career. I spent most of my early childhood in China, briefly in Indonesia, and later part of my upbringing in Vietnam.”

From a young age, Park’s parents were always supportive of her creative interests — and this freedom to explore her passions sparked an interest at the age of 10 to one day go to New York and pursue fashion design. “I enjoyed painting in acrylic a lot and pencil sketching during my high school years,” she adds. Her parents encouraged her to take extra classes in art as a teenager, “but a girl couldn't help but fall in love with clothes and the making of it.”

Park’s dreams came true when she enrolled at Parsons The New School, where she later earned a degree in fashion design. “As much as school was great, I really found my calling through internships,” Park explains. “I was so inspired by seeing a collective of talented individuals coming together as a team and making the impossible happen.”

Juggling school and countless internships (with labels including Tibi and Alexander Wang) ended up paying off as Park landed her first entry-level job at Proenza Schouler. “I interned for six months straight right out of college and they offered me a full-time [position] when an opening arose,” she explains. “I started as an atelier assistant on my first day while my manager was out of town.” In this role, Park says she was, “the glue communicator to the designers, pattern makers, and the sewers, assisting in fittings and ensuring the ins and outs of [the] atelier were on track.”

After her stint at Proenza Schouler, she landed positions including Women's RTW Collection Designer at Coach and Design Development and Production Manager at Orseund Iris. Nurturing her design skills and gaining operational experience with these labels prepared the designer for her real calling — creating her brand Tae Park.

When the Brooklyn-designed, New York-made label officially launched in November, it started off with five pieces (including the Cotton Gym Shorts and U Neck Waffle Sweater) and two core fabrics, cotton and deadstock waffle knit. “Mainly because that was all I could afford to execute and I was highly inspired by my activewear at the time,” Park explains. Currently, Tae Park has expanded its offerings to include items like its sought-after Exposed Bra Knit Top with plans to launch new pieces every few months.

Understandably, it hasn’t been easy building her own business solo. Park says the real challenge lies in the balance between creativity and business. Park turns to friends for advice and to help produce photoshoots. She has also developed close relationships with her garment-makers in New York, trusting them to execute her artistic vision. “I have trained my whole life to be a designer, but being a business owner is a new obstacle for me,” she explains. “But I am learning to love and embrace it.”

When she’s looking for inspiration for her line, Park references her own closet, particularly the vintage items that she treasures and the experiences of her childhood. “I make mental notes on pieces I am wearing the most or dying to wear,” the designer explains. “I am an extrovert at heart, so I love bringing in different cultures from places I was raised in.”

Park has been overwhelmed by the response since launch, seeing customers make second, third, and even fourth purchases from the emerging brand. “Actions speak louder than words, and when you receive a returning customer it's a true gratification for the brand that although we are small, we are heading towards the right path,” she says.

Social media played a crucial role in helping Park grow her customer base and connect with fans of the brand on a deeper level. “I am grateful I am able to pivot and create a voice on my own terms thanks to social media,” she says. “Discovering people who resonate and have the same value as Tae Park is so gratifying.” While her clothing is available to purchase on her website, Park communicates directly with her customers one-on-one through social media, “letting them know that a real person just like them is represented behind Tae Park,” she explains.

As far as future plans go, Park is hoping to continue to grow organically. “I think that is the full advantage of starting small, to make decisions based on my values and share an honest story,” she says. “I hope to grow Tae Park with my customers and audiences. To know my pieces have helped these individuals feel beautiful and powerful is when I am reminded Tae Park is heading [down] the right path.”

Ahead, shop some of Tae Park’s chic, minimalist pieces. And make sure to keep close tabs on the label as it’s destined to explode soon.