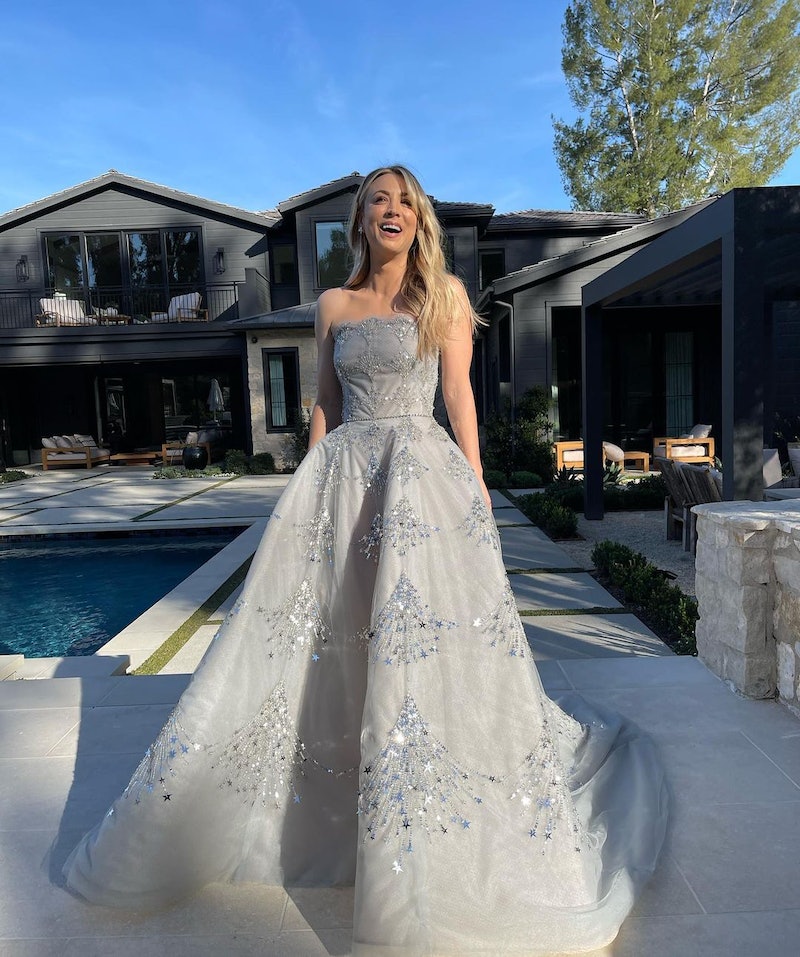 One of the unpredictabilities of having award shows during a pandemic — aside from faulty internet connections — is not knowing what your favorite celebrities will wear. Some may choose to dress down in elegant pajama-like clothes while others stick to their usual style guide, whether that be dramatic or classic. One star in particular, Kaley Cuoco, chose to keep it timeless. For the 78th Annual Golden Globe Awards, Cuoco wore a strapless dress. The softly colored blue gown was from Oscar de la Renta and featured a full floor-sweeping skirt with embellished shooting stars covering the entire dress.

The celebratory design was appropriate given Cuoco's Golden Globes nomination. She was in the running for Best Actress in a Television Series, Comedy or Musical for her role in HBO's The Flight Attendant. (The award ultimately went to Catherine O'Hara of Schitt's Creek.) Despite not taking home a golden statue, Cuoco still remained a winner when it came to stylish red carpet looks. The strapless dress, for those who are wondering, is from Oscar de la Renta's Fall/Winter 2020 collection. It seemed that Cuoco did little to tweak the gown from its original form, instead choosing to embrace the piece as is. The gown sparkled in the sunlight and under a cloudless blue sky in Los Angeles.

Underneath her dress, Cuoco wore a pair of silver Stuart Weitzman heels and turned to celebrity-beloved jewelry brand Harry Winston for her jewels. All three brands Cuoco chose embodied classic qualities, which fit the actor, as she typically opts for this Old Hollywood aesthetic in her red carpet looks.

Cuoco could not stop smiling in an outfit photo posted to her Instagram. The ODLR look gave off strong Cinderella vibes, which meant Cuoco was the belle at the (virtual) ball ... right? Right. See how the dress looked on the runway, below, then check out all the best beauty and jewelry looks from the 2021 Golden Globes.