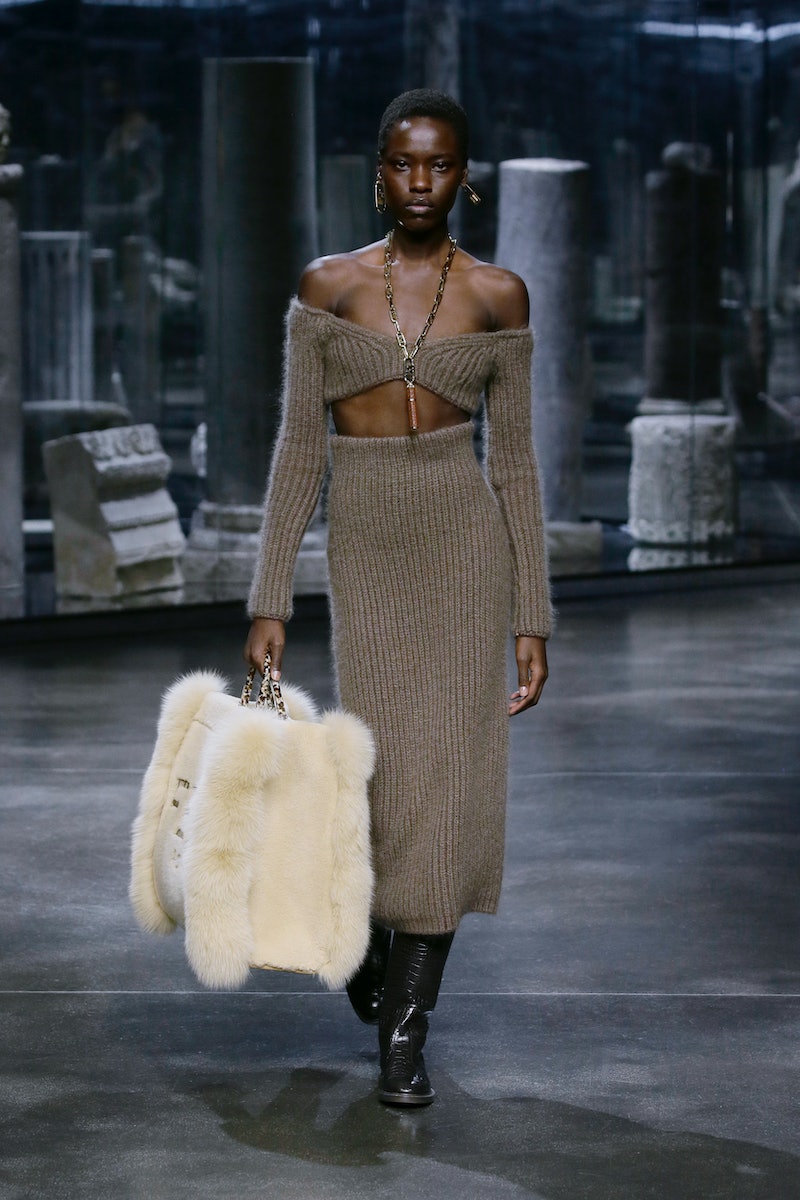 Fashion Week runway shows can either veer into a theatrical spectacle or embody a more subdued vibe. For Fendi's Artistic Director Kim Jones, he chose to let the clothes speak for themselves. In his first ready-to-wear collection for Fendi's Fall/Winter 2021 lineup, the British designer rooted his seasonal selections in neutral tones and wearable form-fitting silhouettes. This was purposefully done to evoke a buildable, tailored wardrobe anyone could tap into. In an interview with WWD about his collection, Jones shared that he wanted to make clothes women would want to buy. "I'm not gonna lie. I think that's what my job is. I want all my friends to go, 'I want that straight away,'" he said.

He achieved this goal through the use of a tonal palette consisting of caramels, chocolate browns, flushed pinks, creams, and black. Don't call him safe and mundane, though. While the colors are all subtle in the Fall/Winter 2021 collection, the designer had various standout moments with pieces like an oversized furry coat with a fringed hem (that drew parallels to a piece from Bottega Veneta's Fall/Winter 2020 line) and a textured handle shearling bag, which is destined to show up on the arms of your favorite celebrity. There were some notable tributes to the history of the fashion house and to the late Karl Lagerfeld, too, if you looked closely at the clothes. Jones incorporated the Karligraphy monogram on items like tights and reworked a utilitarian shirt jacket, inspired by Silvia Venturini Fendi's daily uniform, into a luxurious shearling iteration (look 8 in the collection).

Unlike his Haute Couture Spring/Summer 2021 show, which saw the return of '90s supermodels like Naomi Campbell and Christy Turlington in addition to unexpected celebrity faces — this runway was quieter and devoid of a star-studded spectacle, much like the clothing palette Jones chose. The designer did bring some elements from his couture collection into the Fall/Winter 2021 lineup namely a selection of marbled silk dresses and jacquard knits that featured rosette blooms and delicate organza embroidery. In addition, the runway set, which featured glass enclosures that contained sculptural pillars, was a throwback to the interlocking grid design at his couture show back in Jan.

Touching upon the bralette trend you'll see everywhere for spring, Jones continued to propel this theme across his fall offerings. Eagle-eyed shoppers will notice the incorporation of this delicate knit piece under structured blazers, striped trench coats, and shearling Fendi monogram jackets. The bralettes also come with matching knit skirts for an easy one-and-done set, which goes back to Jones' theme of making his collection a wearable one. As for the bags, fans of the label can expect a mix of large and miniature styles in next season's collection, whether that be a moss-green fuzzy crossbody design or a dainty little backpack strapped on top of knit co-ords.

Lastly, no outfit is complete without a piece or two of jewelry, which was spearheaded by designer and jeweler Delfina Delettrez Fendi (she also happens to be a fourth-generation Fendi heiress). The creatively introduced wax seal gold chained pendants stamped with Karligraphy and chunky gold collars bearing the Fendi logo. These pieces are certainly primed to become staples in your closet as they can dress up a cashmere crop sweater or easily blend in underneath statement outerwear.

Scroll through to see more from the Fendi runway and take note of your favorite pieces. If you want even more Fashion Month content, check out the color that was all over the New York Fashion Week runways and familiarize yourself with some of Fall/Winter 2021's biggest, boldest trends.