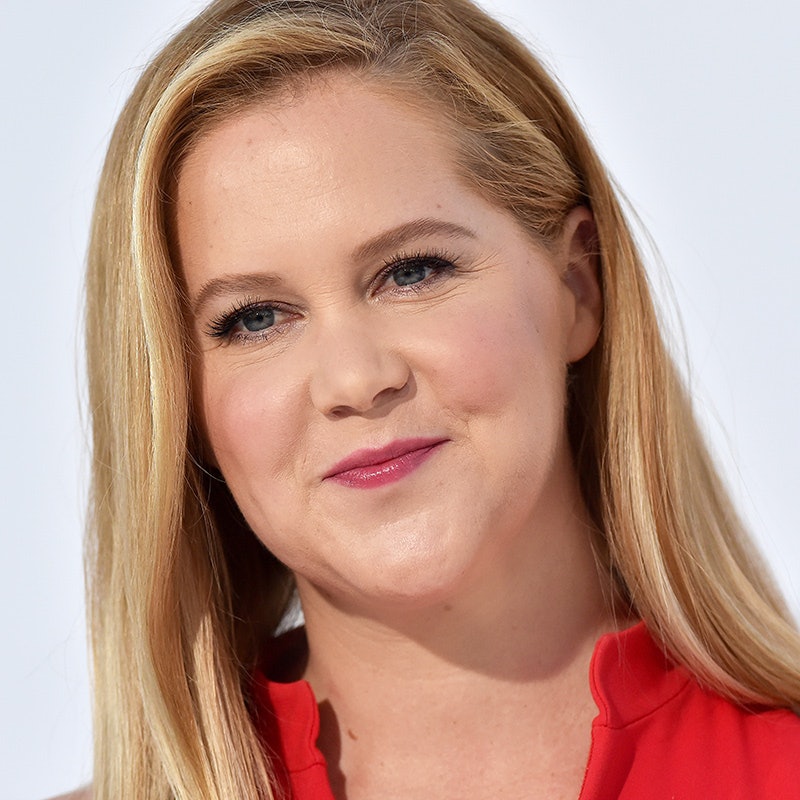 In the first scene of I Feel Pretty, Amy Schumer's character, Renee, attends her first-ever SoulCycle class. It's there she meets a model, played by IRL model Emily Ratajowski, who is also attending her first class. "Everybody's got to start somewhere, right?" she says to Renee as she walks into class, perfectly comfortable with herself clad in tiny shorts and a sports bra. To me, like to Schumer's character, Ratajkowski seems less like the starting point and more like the finish line.

The film follows Renee, an incredibly self-conscious woman who works for a cosmetics company. After falling off her bike at SoulCycle and hitting her head, she becomes incredibly confident in herself.

Side note: what does it say about our image-focused society that I find the most unbelievable part of this sequence the manner in which she got the head injury, not the fact that it could take something as drastic as a giant knock on the head for a woman to gain radical self-confidence? That's how difficult having self-confidence as a woman seems to me, at times.

I saw myself as Renee, incredibly self-conscious pre her SoulCycle head bop, as she undresses in front of a full-length mirror, tears welling in her eyes because she hates what she sees. I've experienced that kind of self-loathing, and it's insidious and heartbreaking.

What I enjoyed about the film was that it wasn't about a woman who undergoes a huge makeover and then finds her confidence. She looks exactly the same, she just feels differently about her body. That said, one of the main critiques of the film is that Renee shouldn't be so insecure about her size, because she's not really that far outside what Hollywood considers traditionally beautiful.

“But it’s not anyone’s place to tell someone whether or not they have a right to feel bad about themselves,” Schumer told Bustle. “People just projected hard, and I understand why—it’s f***ing hard to be a chick,” she says. Everyone has their insecurities, and no one's self-consciousness should be invalidated. The movie touches on this as well. Supporting characters, like cosmetics company CEO Avery LeClair (played brilliantly by Michelle Williams), also have their own issues to deal with. Basically, everyone has their insecurities. Also, no one is spending as much time thinking about what you're doing and how you look as you are. When I think about it, it's kind of crazy the amount of time I've spent disliking my body.

Another widely critiqued aspect of the film is that Renee, post-SoulCycle accident, sees herself as thinner, which reinforces certain problematic ideals of beauty. (I.e. that you have to be skinny to be beautiful.) But you never actually see the version that Schumer's character sees in the mirror. I took it as that she still looks exactly the same, she just feels differently about her body. Sometimes my perception of myself is that my arms are amazingly toned, that my butt looks awesome ... and within the span of days (or even hours) I can look at the exact same part of my body and be upset by what I see.

It's also interesting to note the way people treat Renee when she struts into a room, confident and self-assured. They don't know what to make of her, so they usually end up either laughing at her or being rude. This brings to mind a story I read where a woman responded to compliments with "I know" instead of thank you. What she (and others) found was that people tended to get mad if they didn't respond demurely.

I can't tell you the number of times I've thought that if I weighed less, I would be not only prettier but also happier. Like, okay doctor, I've finally reached my goal weight so I totally don't need these anti-anxiety pills anymore. I Feel Pretty makes the case that confidence can change your life. Sure, it's not a magic solution that automatically can fix problems stemming from a society that still needs to reexamine it's unrealistic expectations of beauty—but from my own experiences, I've found that confidence and self-love really can do amazing things. And ultimately, that's the message the film wants to get across.