Carrie, Miranda, and Charlotte are back! 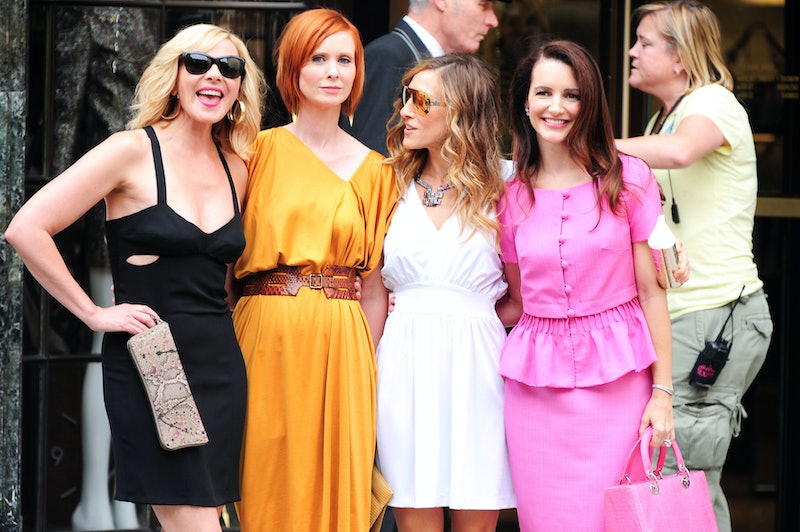 If you were anywhere near your phone the weekend of January 9, you were likely on top of 2021's first dose of good news: A Sex and the City reboot is underway and more details are forthcoming. The announcement for the revival, titled And Just Like That..., came in the form of a short clip featuring a montage of busy New York City streets, which packed an instant punch of pre-pandemic nostalgia. The video was shared by returning cast members Sarah Jessica Parker, Kristin Davis, and Cynthia Nixon via their Instagram accounts on Jan. 11. While the announcement brought joy to group chats everywhere, it left a lot of room for questions — When does it air? Who's on board, and who isn't? — all of which TZR is getting to the bottom of.

On July 9, the Instagram for And Just Like That... shared the very first production image of Cynthia Nixon, Sarah Jessica Parker, and Kristin Davis. The three women are reprising their iconic roles as Miranda Hobbes, Carrie Bradshaw, and Charlotte York, respectively. According to Deadline, the 10-episode limited series will follow the trio through "even more complicated realities of life and friendship in their 50s," as compared to their 30s. There's no confirmed air date yet, but the series has begun production in New York City, making fans hopeful that it could screen on HBO Max by late 2021. Per Variety, the three leading ladies will be paid over $1 million per episode — making a strong case for getting back in the game.

In addition to the trio's return, Executive Producer Michael Patrick King will return. (King has previously directed Sex and the City episodes and has worked on the show's two feature films.) Unfortunately, the iconic costume designer Patricia Field will not be rejoining, as she is currently working on Emily In Paris. What is certain (and was widely-deliberated at one point) is that Kim Cattrall is not participating in the revival. "Samantha isn't part of this story. But she will always be part of us. No matter where we are or what we do," Parker wrote in response to a comment about the matter on her Instagram.

Concerned about how the series will fare without Samantha Jones' salacious witticisms, theories are already buzzing about whether or not the producers might replace the actor with another famous face. One Twitter user even suggested having 30 Rock's Jane Krakowski play Cattrall's character, writing, "Have her announce she's had 'a little work done' during quarantine, to which Miranda gasps, 'You look like a completely different person!,' and honestly you're good to go."

Other fans are wondering if the show plans to eliminate the character altogether and if so, how. One Twitter fan suggested a storyline on the character passing away from cancer and how that affects the rest of her friends. Cattrall is not the only original Sex and the City member to go separate ways though, the series' creator, Darren Star, is also not a part of the reboot due to other obligations (notably, an ongoing deal with ViacomCBS).

Stay tuned for more updates as shooting begins. In the meantime, take a welcome rewind through the best Sex and the City style moments that nobody talks about, but should.

This article was originally published on 1.12.2021