The piece is a classic. 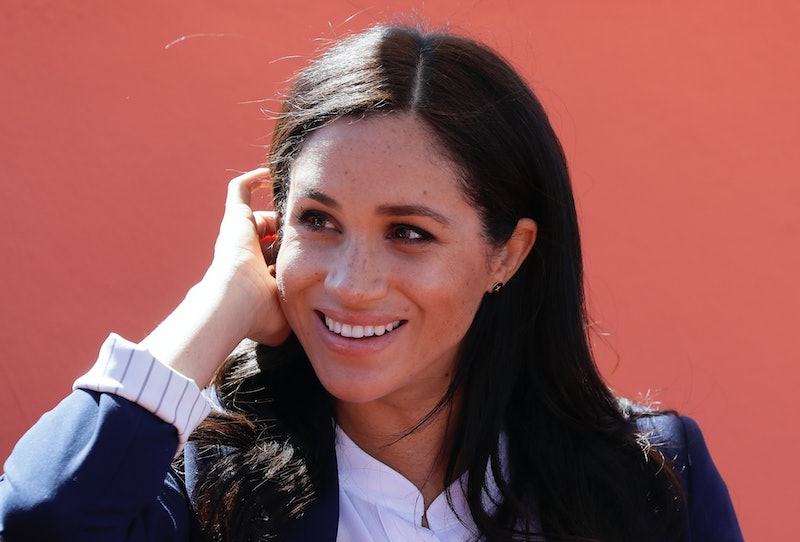 Meghan Markle has a history of rewearing some of her favorite pieces and during her time as a royal, fans were always eager to see what she wore. Now that Markle is getting her footing back in the spotlight on the West Coast — she and Prince Harry have a new interview with Oprah airing on March 7 — everyone can again track her wardrobe progression. In a clip shared by CBS of the upcoming interview, Markle was pictured wearing a black Armani dress with a stack of bracelets on her wrist. One of the bracelets Markle wore belonged to Princess Diana. The glistening piece was a Cartier diamond tennis bracelet, which was elegant and timeless in complementing Markle's Cartier Love bracelet, which Prince Harry gave her in the early days of courtship.

This isn't the first time Markle has worn a piece from her late mother-in-law's jewelry collection. Markle's engagement ring contains stones from Princess Diana's jewelry collection and on her wedding reception night back in May 2018, Markle wore a dazzling aquamarine ring that also belonged to Princess Diana. The diamond tennis bracelet, however, seems to be an absolute favorite for Markle as she has continuously worn it throughout her time as a royal and now, as a non-working royal. The diamond tennis bracelet had a resurgence in popularity in 2020 thanks to its minimalist and nostalgic design, though it seems Markle, a trend-setter herself, never stopped wearing hers.

A Preview Of Markle and Prince Harry's Interview With Oprah

Bracelets aside, Markle completed her outfit with Aquazurra heels — one of her trusted footwear brands — and an aquamarine pendant cord necklace from Pippa Small. Though it appears Markle has settled into the laid-back lifestyle of California quite nicely, her royal-esque tastes when it comes to her wardrobe, as warranted, can come back out to play at any time. As she makes more public appearances in Hollywood, she'll likely be reaching for the same elevated pieces, in addition to new items, so fans definitely take note. This year will shape up to be a big one for Markle as she's working on numerous projects like her Spotify podcast, expecting her second child, and participating in public interviews.

Should you feel inspired by Markle and Princess Diana's classic diamond tennis bracelet, accessorize your wrist with some similar picks, below.