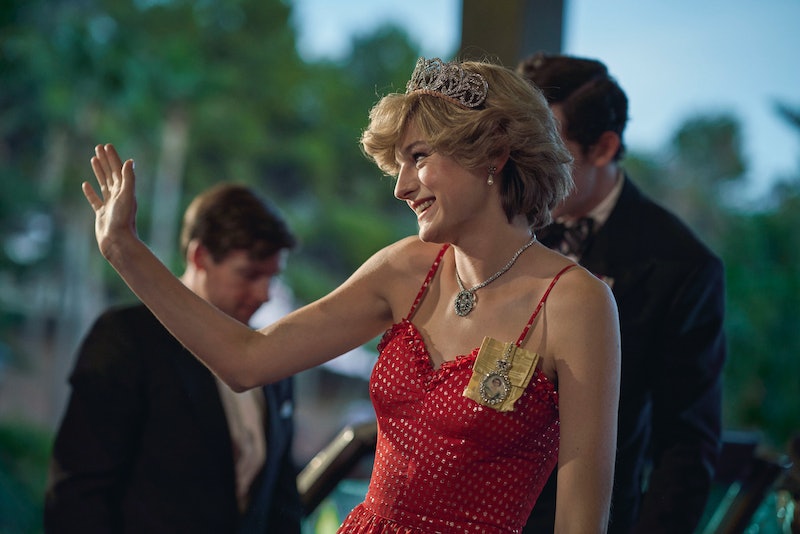 Whether or not you've been keeping up with Netflix's Golden Globe-sweeping series, The Crown, odds are you've taken an interest in its latest royal addition: Lady Diana. On Nov. 15, the Princess of Wales (played by rising star Emma Corrin) is making her long-awaited debut in the series, and it's coming with a trove of ensembles that take a stab at the royal's inimitable style. After some careful review, nearly every Princess Diana costume in The Crown is a perfect rendition of the real thing — with everything from casual cardigans to wedding gowns nailing even the most minute of details.

In the days leading up to the season premiere, Netflix released a handful of tableaus — all of which put Corrin's Diana on display. Apart from embodying her in physique (shoulders rolled forward; her same coiffed, long pixie cut), the actor's costumes were entirely on point, down to the finest intricacies. Costume designer Amy Roberts used clothing to illustrate Diana's journey from an assistant teacher at a nursery school to global icon: “What I think is fantastic about The Crown is the journey of Diana from this kind of girl that’s not particularly fashion[able] and she’s shy, wearing these bobbly jumpers,” Roberts said at the opening of the Brooklyn Museum's new exhibit, which includes costumes from The Crown's fourth season. “It was so amazing to go from that and take her into this fantastic, streamlined, extraordinary woman.”

To get everyone excited for the Nov. 15 arrival date, TZR's giving you a sneak peek at Emma Corrin's best looks as Princess Diana, all of which are nearly a dupe of the real Miss Spencer. To sweeten the deal, there's also scores of pieces you can shop right now to recreate each outfit yourself. Browse ahead:

As famous as Diana was for her glamorized ensembles, her off-duty looks were just as iconic — and this punchy pink outfit is a memorable favorite. There's no denying that Roberts nailed this look — and so can you. Try Holiday The Label's Kokomo pants with Veronica Beard's fuchsia sweater below.

Princess Diana was known to gravitate towards surprising evening silhouettes, and this one-shoulder gown is no exception. Both opting for florals, Corrin's version goes for a slightly more saturated print, nailing the '80s-worthy look. While we don't have a sense of the footwear chosen for the TV recreation, Diana chose a pair of white velvet heels - and Roberts will surely do the same.

In a near-identical recreation of the royals' famous engagement photos, Corrin sports a scallop-hemmed cobalt blue blazer and a bow-tying blouse in the same exact bluebird print as Diana's. To recreate the polished outfit, grab Rebecca Taylor's poplin bow top, and Hobo's Lauren clutch to finish it off.

This smart, polished dress is a low-key favorite from Diana's style file, which Roberts recreated with a hunter green version. THE GREAT. offers a dress with the same buttoned-up aesthetic, which you can accessorize the Diana way — with twisting gold hoops and a velvet beret.

Princess Diana was not afraid to repeat a great dress — which was evinced by this glittering red frock, which she wore to countless occasions over the years. The Crown imitated this red carpet moment in particular to a tee, with a gold clutch and a diamond-embellished pendant necklace that's just like Diana's.

Known to wear pastels in the chicest ways, Diana wore a floral blouse (which nailed 2020's statement collar trend) with a pair of butter yellow overalls and magenta canvas wedges. To double-down on the decorative look, Corrin's Diana layered a floral-embroidered sweater over it all.