This iconic hairstyle deserves an award. 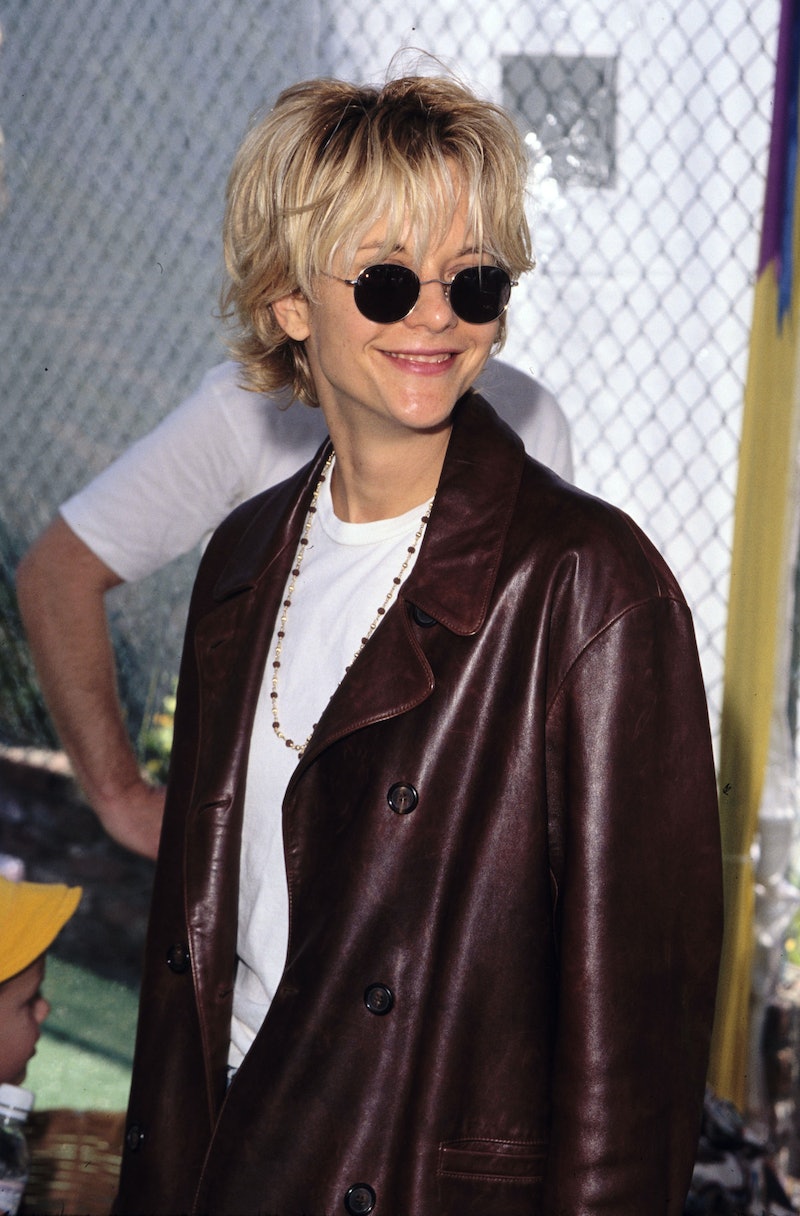 In the '90s, Meg Ryan was one of the most recognized rom-com queens. Her breakout role in 1989 as Sally Albright in When Harry Met Sally paved the way for the decade. Ryan then took on other major hit films like French Kiss, Sleepless in Seattle, You've Got Mail, and City Of Angels. On top of her notable acting that led her to countless awards and nominations, the Connecticut native's iconic shag haircut deserves a trophy of its own. As a matter of fact, Meg Ryan's beauty evolution includes a slew of funky, lived-in hairstyles that launched full-blown trends.

Ryan's most famous shag first came to be for the film French Kiss in 1995, courtesy of celebrity hairstylist Sally Hershberger. "The movie [plot] called for a situation where she couldn’t do her hair, so we thought it would be best to give her a cool, messy short haircut," Hershberger tells TZR. The hairstylist says Ryan wasn't technically washing her hair in French Kiss. According to an essay Ryan wrote for InStyle, her character in the film was stranded in Paris without any money or luggage, so clearly, she didn't have any shampoo on her either. Hershberger had the task of making Ryan's hair look good and bad at the same time, which is how she decided on the shag. "The thing with actors is that they don’t wear wigs and you [have to] do their hair according to the movie that they’re taking on," the hairstylist explains.

Hershberger believes this cut got attention because it wasn't, in her words, "momsy." She says back then, girls either had really short hair, or it was overly done. "This [shag haircut] was really disheveled and messy, and it looked like you didn’t do anything, which is why I think so many people liked that look," Hershberger explains. In fact, the hairstylist thinks the hairstyles that create the most buzz are the ones that are a little undone and a bit scruffy.

Below, find Meg Ryan's beauty evolution from the late '80s until now. Don't be surprised if you find yourself calling up your hairstylist asking for one of Ryan's signature looks — they're still that good.

Ryan attended the premiere for Cross Your Heart in 1987. For the event, the actor arrived with curly locks and very minimal makeup under her circular frames.

Though Ryan often sticks to short styles, she switched things up with long, straight hair for the premiere of When Harry Met Sally in 1989.

Meg Ryan's Beauty Evolution: When A Man Loves A Woman, 1994

Hershberger says she gave Ryan a choppy bob for the movie When A Man Loves A Woman in 1994. "She really did [the style] before anyone else did," the hairstylist notes.

Both her role and her shaggy hair for the film French Kiss in 1995 put Ryan on the map.

Hershberger says Ryan's hair for her role in Addicted To Love in 1997 gained a ton of excitement. "It was more like Edie Sedgwick vibes," she explains.

For her role in City of Angels in 1998, Ryan sported cute, short curly ringlets.

Ryan started the early 2000s off with a cool layered bob for her role as Eve in Hanging Up.

Meg Ryan's Beauty Evolution: On Location for In the Cut, 2002

In 2002, while on set for the movie In The Cut, Ryan looks almost unrecognizable with her straight caramel brown locks and long wispy bangs.

While still sporting a caramel tone, Ryan added lots of layers to her hair for the premiere of Against the Ropes in 2004.

In 2008, the actor branched away from her classic short bob and arrived at the Crystal + Lucy Awards with long, voluminous curly hair.

At the 63rd annual Cannes Film Festival, Ryan went back to her signature curly bob. And her makeup was all about full, fluttery lashes and glossy lips.

Photographed out and about on the streets of Soho, New York, Ryan was shown with a messy, unbrushed hairstyle.

Hershberger says Ryan's hair is very thick and wavy, which is evident in this look for the screening of the film Ithaca in 2016.

At the AFI Life Achievement Award Gala in 2017, the actor took to the red carpet in curly hair that just touched her shoulders, as well as a subtle smoky-eye.

Ryan brought back her pin-straight strands for a Friars Club event in 2018. And while she typically rocks a light pink lip, the actor went a notch darker here.

For her hair at the Academy Of Motion Picture Arts And Sciences Governors Awards in 2019, Ryan played with layers and highlights.