Here’s what happens behind the scenes. 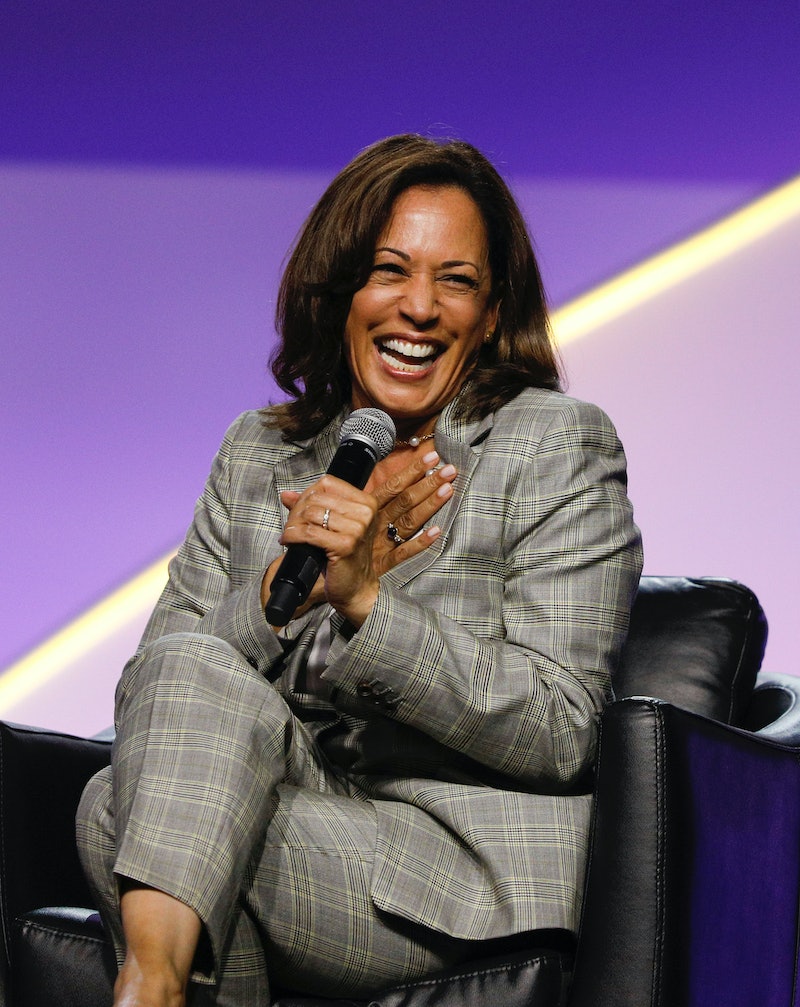 The fascination with what a celebrity wore or the costume designs in a show has spurred a community of like-minded individuals to track their every outfit. Take the popular Instagram accounts devoted to highlighting outfits from the Olsen sisters or from Friends and Sex and the City, which offer fans a chance to come together to discuss the intersection of pop culture and fashion. Increasingly, politicians, including Vice President Kamala Harris, have sparked style conversation as well — exploring where fashion meets politics. When it comes to tracking Harris’ style through outfit ID websites, journalist Susan E. Kelly of What Kamala Wore and art historian Vittoria Vignone of Kamala’s Closet, are arguably, two of the leading forces in shaping the conversation around Harris' VP, and off-duty, looks. The outfit identification work for Harris is laborious, time-intensive, and not without its fair share of internet trolls.

"I first became really familiar with [Kamala Harris] during the [Brett] Kavanaugh Supreme Court hearings and was just wowed by the presence she had. I followed her, I followed her campaign, and then started to think about a [style] site [for her]," says Kelley to TZR. "I was really intrigued by the intersection of politics and style, and particularly taken by someone whose wardrobe is very understated. Her wardrobe is never the story, unless she wants it to be part of the story.”

For Kelley, a veteran news journalist, launching a website dedicated to Harris' style was not far out of left field. She has been running the popular website What Kate Wore — a platform that tracks Kate Middleton's outfits — for over a decade and saw, early on, that there was a growing appetite for what Harris was wearing. Currently, Kelley spends about 30 to 40 hours running each of her outfit ID sites weekly, with the Harris one still in its nascent stage, and says it’s her full-time job.”

While Kelley's site focuses on recaps of Harris' wardrobe and her government work, Vignone, who runs Kamala's Closet as a hobby, takes a more historical and catalogue approach to dissecting Harris' outfits. One of her blog posts, for example, delved into the history and symbolism of white clothing after Harris appeared in a white pantsuit for her VP-elect acceptance speech back in Nov. 2020. This deeper context Vignone can offer readers is a reflection of her background in art history and as a former employee with The Frick Collection — a museum in New York City. Meanwhile, for buzzy of-the-moment commentary on Harris' outfits, Vignone saves that for her Instagram account, also called Kamala's Closet.

Neither founders have a direct line of access to the White House, so the process of finding out what Harris wore involves checking her go-to brands — she wears a lot of blazers from Altuzarra and heels from Manolo Blahniks — and from there, branch out on the internet to find similar items until there's a hit. “I sometimes enlist my sister [for help in identifying Harris' pieces] because she's got a really good eye," says Vignone. "Sometimes people even help me through [Instagram] DMs, just being like, 'hey, I don't know if you've ever considered this brand.' It's definitely a group effort, but one that I try to make the most sense of."

Both websites, What Kamala Wore and Kamala's Closet, offer readers a chance to shop the exact pieces from the VP's wardrobe (if the items are still available) and by linking out to retailers or the brand directly, it can create a symbiotic relationship between site and brand that generates revenue. This is especially beneficial if running the outfit ID site is the person's full-time job as it is for Kelley. The journalist says that currently, What Kate Wore generates revenue through "strict advertising, affiliate links, and sponsorship deals." She is hoping to replicate this revenue success with the Harris site.

For those wondering if the two ever have qualms about the "appropriate-ness" in covering what a politician, particularly a female politician, wears, both Kelley and Vignone admitted they have struggled with that internal argument. "I go through these mental gymnastics as a woman and as a feminist 'is this the right thing to do' ... but because I do feel strongly that there should be a record and a way for people to access the information [about Harris' outfits], I [run the website]," says Kelley. " Discussing her fashion does not diminish, in any way, her accomplishments. I know there's a body of thought that thinks it does that, but I don't think so. [Fashion] is simply another tool in [Harris'] toolbox to convey a message and to engage with constituents."

How female politicians can send messages to supporters, and opponents, with their clothes or accessories, is not a new phenomenon. Shirley Chisholm, the first Black woman elected to Congress in 1968 wore white during her victory to paid homage to the suffragist movement, the late Ruth Bader Ginsburg was known for her many jabots including her famous Dissent Collar, and former First Ladies styles from the likes of Jackie Kennedy Onassis and Michelle Obama have been deeply dissected over the years. More recently, in Feb. 2021, Congresswoman Stacey Plaskett went viral for wearing a blue cape dress while delivering her speech in favor of impeaching Donald Trump.

A politician’s supporters are always watching and waiting, and for the Harris super fans out there, staying up-to-date about her policies and also what she’s wearing aren’t mutually exclusive. Vignone shares Harris supporters range from working professionals to younger audiences on the Kamala's Closet Instagram. They follow her every move and want to know what she's doing, including what she's wearing, because the VP is their role model. This fervor, of course, comes with a more critical eye on Harris and if she happens to make a misstep with her fashion, like when she wore pieces from Dolce & Gabbana, all hell breaks loose. For those who weren't looped in, the fashion house has been embroiled in numerous racially-insensitive controversies over the years and many took offense to Harris wearing the label as indirectly supporting such school of thoughts.

Vignone was the first to break the news, ahead of any official press outlet, that Harris wore a D&G blazer (pictured above) back in Jan. She did not sleep for three days because of the intensity with which the news, and the reactions, spread from her Instagram post. "I had multiple people messaging me being like, 'My neighbor is best friends with her old campaign manager ... can you save all of these [Instagram Story] highlights? We need to stop this," she recalls. "[On the other hand], there were [those] just besotted with her and didn't want any controversy to touch her, so they [were messaging me], 'why would you do this? why are you exposing this?' That was hard [on me], but I tried to be as diplomatic as possible."

The power both Kelley and Vignone hold in shaping the dialogue, and perception, around Harris is not taken lightly by either woman. "I knew [running Kamala's Closet] wasn't always going to be so rosy and so simple ... I wasn't going to shy away from hard conversations, and I definitely wanted to be as honest as possible with people," says Vignone. Kelley has a similar code of ethics, revealing that "accuracy is paramount" for her when identifying the pieces in Harris' outfits and "not steering readers down the wrong path."

In running the outfit identification websites, both women have taken on roles, too, as social media managers. Their websites and social media accounts like Facebook and Instagram get inundated with both positive and negative commentary. "People are so nasty at times and so ugly, it can be very much an energy suck. You think you're out in front of [the internet trolls] and you think you got them all. Then, you run to the grocery store, do a couple things, and you come back and there are six more [negative] comments," says Kelley.

Both her and Vignone are active in policing their Harris websites and social media accounts to remove any misogynistic, racist, and obscene comments in order to make the community a welcoming place for discussion. The positive comments, ultimately, outweigh the trolls and it can be rewarding to see users participate in a democratic forum on not only Harris' fashion, but the Biden-Harris administration. "I was getting so much interaction [on Instagram for Kamala's Closet] from females of all ages, nationalities, and locations," says Vignone. "On inauguration eve, people from all over were, in different languages, telling me [on Instagram] that they were having a drink in honor of this great day for America, which was so moving and fun."

Aside from the interaction Kelley and Vignone have with their followers, the two are also part of a close-knit circle of (mostly) women who run outfit ID websites. Though it's impossible to estimate how many legitimate outfit ID sites and Instagrams are out there, virtually every big celebrity or politician has a fan site that tracks their fashion. For example, Alexandria Ocasio-Cortez, who has been vocal about her style and beauty routine, has an Instagram dedicated to her called Dress Like AOC and there's, of course, one for First Lady Dr. Jill Biden too called Dr. Jill Biden Fashion.

"I've met a lot of the women who [run outfit ID websites] and became very good friends with some of them. It's really been a wonderful and very rewarding sidebar element of the whole process," says Kelley. "A few of us have a little private Twitter group where we'll connect and talk about everything, like 'how's life, how's your kids, how are you coping with the lockdown number three or whatever?' [Plus] when you get a little frustrated, [it's nice to ask the group] like 'okay I've been looking for this blouse for four hours and my eyes are bugging out. Someone save me.'"