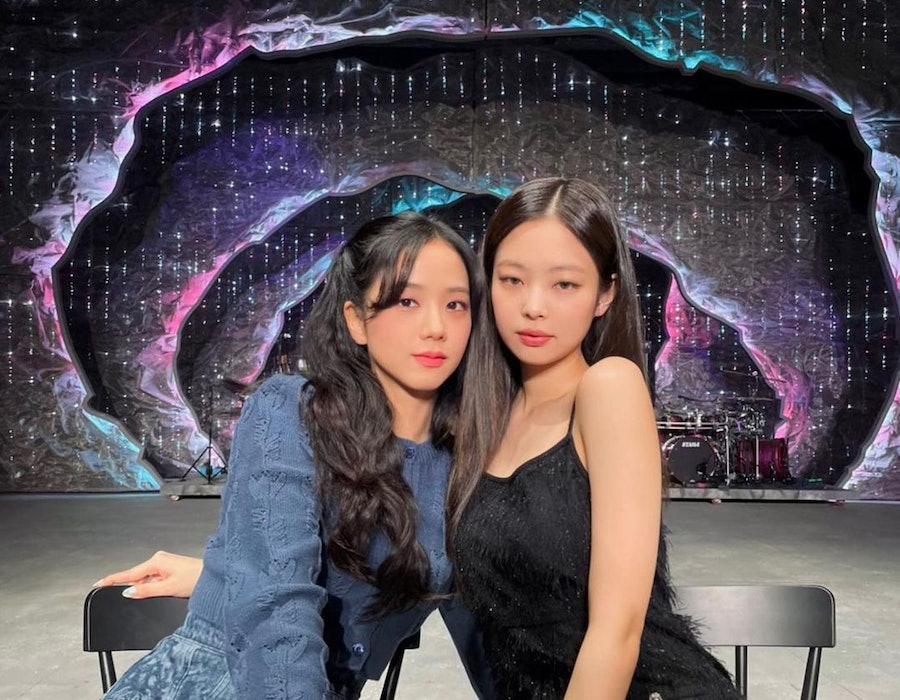 The allure of Korean girl pop group Blackpink can be traced back to their musical style — the songs are often a medley of rap, pop, EDM, trap, English, and Korean — diverse backgrounds, seemingly drama-free friendship, and their coveted red carpet-worthy wardrobes. Collectively, Blackpink members Jennie, Lisa, Rosé, and Jisoo portray a youthful, designer-clad, edgy fashion scene — see their Tomb Raider-inspired outfits in "Kill This Love" or their retro '50s looks in "Ice Cream" for reference. However, what true BLINKS — the official fandom name for the group — want to know is: What do the Blackpink members wear when they're not strapped into their on-stage personas? (The person responsible for the group's outfit choices is stylist Choi Kyung Won, who has been with the ladies since their debut in 2016.)

Upon a closer inspection, you'll notice each artist has a distinctive style when it comes to her individual wardrobe. Jennie gravitates towards oversize, casual pieces for her off days, Lisa loves edgier items mixed with vintage finds from her travels, Rosé likes feminine and preppy separates, while Jisoo, the oldest of the group (she's 26 years old), keeps her outfits prim and proper with the occasional swipe of red-orange lipstick as her finishing touch. Their differing taste in clothes and accessories are further reflected by the various luxury fashion houses they work with (more on that, below), which all add an elevated aesthetic to their everyday ensembles. However, as different as the members are from one another, since they do come together outside of work, and are close friends, their personal tastes for what's cool can sometimes rub off on one another. Rosé confirmed this tidbit in Blackpink's Netflix documentary Light Up The Sky when she revealed Lisa and her sometimes serendipitously step out in the same outfits.

Aside from binging this documentary and the group's popular YouTube series Blackpink Diaries to learn all that you can about their off-duty styles, you can peruse their personal Instagram accounts for more nitty-gritty details. Jennie, Lisa, Rosé, and Jisoo all document their many outfits on social, whether they're for music videos or late-night television appearances, along with more candid images sprinkled in of their off-camera accouterments. To uncover what each member loves to wear and the pieces they always keep in their closets, scroll down. Each girl's style can be deduced down to three repeating staples, which you'll be able to imitate in your own outfits by shopping similar, or even exact, pieces.

Scroll through Jennie's Instagram and you'll notice the 25 year old has an affinity for hats. She likes to complete her outfits with a beret or bucket hat, alternating between classic black hues or opting for a frayed patchwork topper. As if on cue — she knows you're researching her style — the star recently posted a photo of herself in a black bucket hat while promoting the group's first livestream concert, The Show, on YouTube.

For days when she's not in the studio practicing her choreography or participating in promotional campaigns, Jennie likes to relax in an oversize hoodie. She owns this loungewear piece in a variety of colors, styling them with skirts or underneath a pair of overalls. Like most fashion girls, Jennie also appreciates a one-and-done sweatsuit set. Though Blackpink members rarely tag the brands they're wearing (except for those they're repping), a deep dive reveals Jennie wears labels such as Jacquemus, Reformation, Gentle Monster, Vetements, Miu Miu, and Acne Studios.

The one brand that always pops up in Jennie's closet and Instagram feed? Chanel. The star first became a brand ambassador for Chanel Beauty in 2018, then started repping the fashion house as a whole. Jennie's fans have unofficially crowned her as "the human Chanel," because they think she perfectly fits the brand's image. In addition, Jennie's style is so sought after that the media has stamped the fervor as the "Jennie Effect," similar to the "Kate Middleton Effect" or "Meghan Markle Effect," where an item spotted on the singer will sell out within minutes.

Lisa has the edgiest and boldest fashion sense. She wears brands such as Maison Margiela, Sacai, Danielle Guizio, Balenciaga, Marine Serre, and Zadig & Voltaire. One of the reigning pieces in her wardrobe is the crop top in neutral colors that layer well underneath cropped jackets and blazers. She doesn’t mind showing off a hint of skin in public and often keeps her look modest by wearing high-waisted jeans or covering up with an extra piece of outerwear. In Light Up The Sky, Lisa shares that she loves vintage clothes and will pick up unexpected finds from vintage stores during her travels, which adds to the artist's unique sense of style.

Browse Lisa’s Instagram and you'll find that her ensembles are devoid of the bright, poppy colors you would find in one of Blackpink's music videos. Instead, Lisa's outfits lean most heavily on the color black, whether that be a black crop top or a black blazer paired with black jeans. The moody shade not only complements her dark-hued bob and inky makeup, but also adds to her overall aura of being bold and mysterious.

Each Blackpink member is signed with a major luxury fashion house and for Lisa, her partner is Celine. Designer Hedi Slimane, who took the reins as creative director of Celine in 2018, appointed Lisa as his first ambassador and even photographed the dancer himself for Celine’s Essentiels campaign in 2020. "To me, Celine is unrivaled, and Hedi Slimane has such a multifaceted talent — from clothing design to photography," Lisa previously said to Vogue. "He creates this rare, incredible, and desirable world through his vision. I'm always inspired by his work. It’s truly an honor and pleasure to be able to work with Hedi as Celine's first ambassador." In addition to her work with Celine, Lisa's also an ambassador for Bvlgari, who she also started a partnership with in 2020.

Rosé loves her two-piece sets, whether they're composed of a tiny crop top and miniskirt or a more sporty set paired with lace-up combat boots. Though she doesn't tag brands on Instagram, after much sleuthing by fans, a peek into her personal wardrobe posts on social reveals brands such as Reformation, Realisation Par, Orseund Iris, C/MEO Collective, Kenzo, Off-White, GCDS, and Gucci. Rosé's style is cute and feminine, though Lisa's edgier tastes are likely rubbing off on her as the two continue to navigate the music industry together as colleagues and friends.

Skirts are a part of the Blackpink members' regular on-stage wardrobes, but Rosé continues wearing them without any prompting for her day-to-day activities. In Oct. 2019, she wore a private school-inspired ensemble consisting of a button-down shirt and pleated gray skirt — note the knee-high socks and loafers too — that Blair Waldorf would have approved of. In another look from Oct. 2020, Rosé wore a cropped houndstooth blazer over her bralette and pleated skirt combination, thus nailing a spring 2021 runway trend two seasons early.

As Lisa landed a lucrative deal with Celine in 2020, her friend Rosé scored a campaign of her own that year by becoming the global face of Saint Laurent. At the time, the New Zealand-born musician told Elle Korea, "I still can't believe that I'm a global ambassador, representing a brand that I've thought was really cool for a long time. It's an honor. I also got close to creative director Antony Vaccarello, and I'm learning a lot from his creativity, expertise, and humanity. It's amazing to be able to work with such a wonderful person." Since then, Rosé has incorporated a lot of Saint Laurent's key accessories into her everyday outfits like the label's Solferino crossbody bags. You can also expect to see her sitting front row at Saint Laurent's runway shows in Paris, again, post-pandemic.

Jisoo brings a sense of elegance to everything she does, which translates into how she dresses. Her everyday style is much more understated and straightforward than the sultry outfits she wears in music videos and for media appearances. In her downtime, she loves her cozy sweaters and cardigans from Korean brands like Margarin Fingers and sinoon, both of which Blackpink stylist Choi Kyung Won follows on Instagram. Following suit with the other members of the group, Jisoo also calls on a variety of well-known designers across the world for her easy off-duty wardrobe. You can find labels such as Zimmermann, Stella McCartney, Acne Studios, Coach, Louis Vuitton, and Crocs — one of the most unfussy footwear staples to exist — in her closet.

When Jisoo needs to take a break from sequin bodysuits, short shorts, and red-carpet dresses, you'll find her relaxing in comfortable athleisure separates. Like the rest of the Blackpink members, she starred in an Adidas campaign, and Jisoo regularly showcases the brand on her Instagram. When it comes to athleisure attire, Jisoo does it best as evidenced by her Adidas biker shorts worn underneath a blue shirtdress from Dior. Of course, the star does take her "weekend look" up a few elevated notches with red lipstick and bright blush.

The soft beauty of Jisoo made her a prime celebrity pick to represent the house of Dior. The musician became an ambassador for the iconic French label last year and shared her excitement in Marie Claire Korea's Sept. 2020 issue: "One actress I really love is Natalie Portman. It's a huge honor to be able to promote alongside an actress you really love, for the same brand. Being an ambassador for Dior also gives me confidence. It gives me positive energy to know that I represent Dior beauty." Jisoo has taken a liking to Dior's handbags, specifically, so if you really want to channel her style, investing in a Dior bag, or two, is a must.