Glamour at its finest. 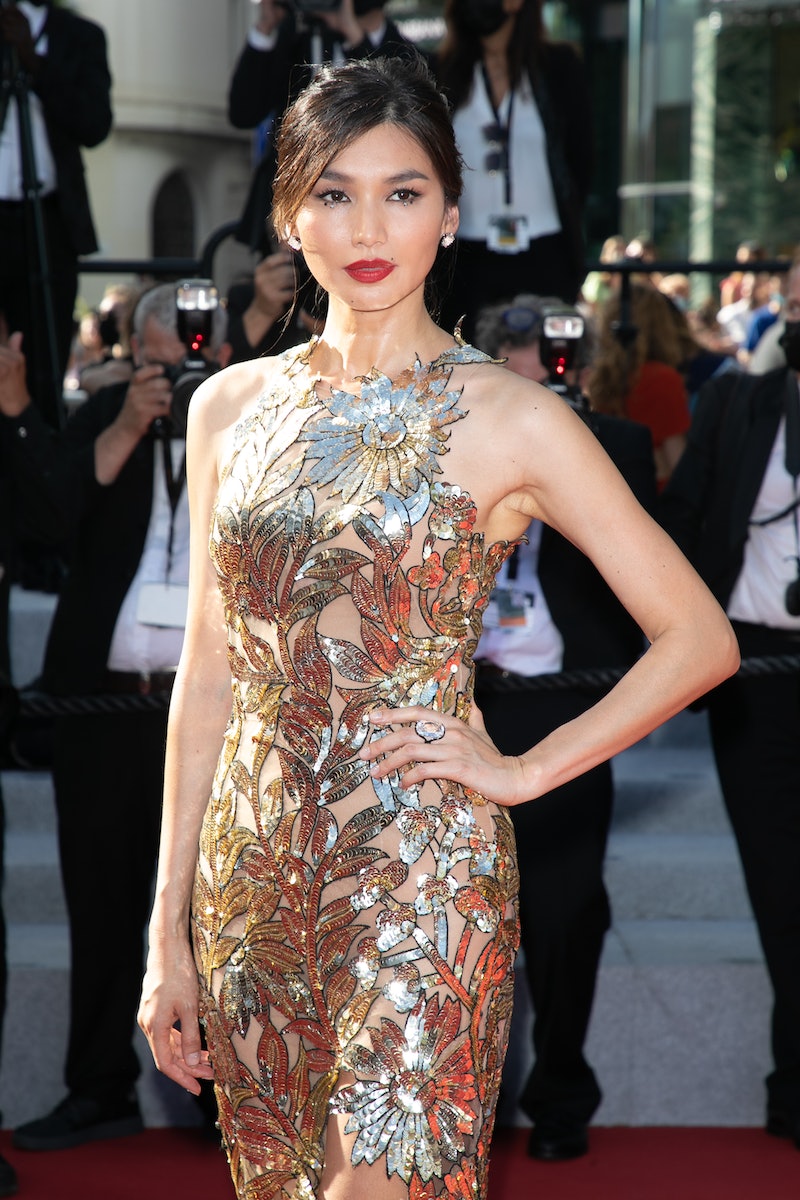 After its unfortunate cancellation last year, the 74th Annual Cannes Film Festival returned for 2021. The invitation-only event serves as a major film hub — it celebrates upcoming films from around the world — as well as a no-holds-barred, fashion spectacle with a reputation of being one of the world’s most highly-anticipated red carpets. As expected, celebrities were more than ready to dress up again and seemingly relished in the opportunity to dazzle in show-stopping, designer looks. They arrived in haute couture ensembles and wore millions of dollars worth of high-shine jewels — basically enough sparkle to make up for the lost time.

The Cannes Film Festival began with a debut film screening of Leos Carax’s Annette on July 6. French actor Marion Cotillard, who stars in Carax’s film, helped to kick off the red carpet in a silver, art deco-inspired look by Chanel that was a glittering mirage of metallics. Mj Rodriguez helped to carry on the glitzy theme in a hooded gown by Etro, which was embellished with diamonds from head to toe, as did Gemma Chan in her high-shine gown by Oscar de la Renta. Even actor Timothée Chalamet joined in on the glitzy high-fashion fun in a silver Tom Ford suit and Cartier rings when making his red carpet appearance for his film The French Dispatch. Equally as notable were Bella Hadid’s many scene-stealing dresses — including a Schiaparelli gown that featured a golden chest piece in the shape of a pair of lungs.

Scroll on to peruse through the most opulent fashion looks from the annual event, which officially drew to a close on July 17.

Fashion influencer and model Leonie Hanne opted for a dramatically oversized silhouette with her golden, tiered Georges Hobeika gown. For another hint of sparkle that coordinated with her metallic dress, Hanne wore sparkly Pomellato drop earrings.

Tilda Swinton wore a Schiaparelli button-up with a figure drawing print and black wide-leg trousers. The ensemble was juxtaposed against the abundance of skirts and gowns from the festival’s red carpet.

Maggie Gyllenhaal, in a strappy, blood orange Gucci gown and Chopard jewelry, attended the final screening of OSS 117: From Africa With Love on July 17.

Rosamund Pike helped to close out the film festival when walking the red carpet in a cherry-colored, romantic tulle gown by Dior.

Model Cindy Bruna leaned into a plaid moment in a patterned look by Area when attending a screening of Les Intranquilles. She introduced touches of shimmer with her Pomellato jewels and Giuseppe Zanotti heels with its crystal ankle band.

For the showing of Les Olympiades on July 14, Tilda Swinton wore a dramatic oversized Oxford button-down with flared navy trousers.

For her red carpet appearance, model Noel Capri Berry opted for a canary yellow Ashi Studio gown with a cutout bow on the back and a voluminous train.

Supermodel Isabeli Fontana attended the Aline, The Voice Of Love screening in a sequined Rami Kadi gown with a thigh-high slit and a corset bodice.

Thus far, the theme of the 2021 Cannes Film Festival red carpet has been touches of shimmer, and Isabelle Huppert joined in on the sparkly trend with this black and silver dress by Louis Vuitton.

Model Coco Rocha posed on the red carpet in a burgundy ball gown with a long-sleeve mesh underlay. Her dramatic look is Christian Dior couture.

Iris Law opted for an ethereal, Grecian-inspired gown by Dior for her red carpet appearance at the film festival.

The French Dispatch star arrived at the film screening in a colorful ensemble by Haider Ackermann. With her cropped pink bolero jacket, orange maxi skirt, and green metallic sleeves, Swinton and her red carpet look was filled with campy flair.

For the premiere of Wes Anderson’s The French Dispatch, actor Kat Graham wore a plunging, stark white gown by Boss and Pomellato jewelry.

When arriving on the red carpet for the screening of De Son Vivant, Vanessa Paradis, a longtime Chanel muse and model, wore a blush pink and floral gown by the French fashion house.

Timothée Chalamet proved this year’s Cannes red carpet theme of excess shimmer extended to menswear as well by rocking a silver metallic Tom Ford suit. He accessorized with noir sunglasses from Celine and rings by Cartier.

Maggie Gyllenhaal chose a ruby-red Versace gown with a plunging neckline and Chopard jewelry for the screening of Benedetta.

French model Tina Kunakey opted for a full Valentino look comprised of a hooded lilac blouse, a dark violet skirt, and an oversized red bow around her waist.

Actor Melanie Laurent donned a flowing crimson gown by Dior for the showing of Flag Day.

Didi Stone Olomide shimmered in a pearlescent pink gown by Philosophy di Lorenzo Serafini and statement jewelry by Pomellato on the red carpet.

Bella Hadid wore a Schiaparelli gown with a golden lung neckpiece and Chopard jewelry to the premiere of Tre Piani. Hadid’s look initially debuted on the runway on July 5 during the fashion house’s Fall 2021 couture show.

Like many of her fellow red carpet stars, Diane Kruger opted for a look with lots of shimmer. She wore a dark, embellished gown by Giorgio Armani with Chaumet jewels.

For a Chopard event, the supermodel wore a jet black Lanvin dress with a voluminous feathered bodice. And, of course, Chopard jewelry that included an oversized emerald ring and round drop earrings to match.

Helen Mirren arrived at the showing of The Velvet Underground in an off-white oxford shirt dress and a pair of polka dot pumps that matched her printed headband.

French actor Isabelle Huppert wore an inky turtleneck dress by Balenciaga and Chopard jewels while attending the debut screening of Tout S'est Bien Passe. For an additional touch of refined glamour, she wore a pair of round black sunglasses with her red carpet ensemble.

The acclaimed actor opted for a shimmering, one-shouldered Atelier Versace dress for her red carpet appearance on July 7.

Candice Swanepoel wore a form-fitting ivory dress with embellished halter detailing by Etro while attending the second evening of the festival.

Jessica Chastain arrived at the Annette premiere while wearing a midnight-colored lace and velvet gown by Christian Dior and a ruby and diamond necklace by Chopard.

For her first-ever appearance at the film festival, MJ Rodriguez wore a custom-made, sheer gown by Etro. On her Instagram, Rodriguez described the experience as a “dream” and a “true fairytale.”

The Oscar-winning actor wore a silver-studded, white gown by Givenchy. She accessorized her red carpet ensemble with pear-shaped diamond earrings and a platinum ring — both by Chopard.

Maggie Gyllenhaal’s pleated silk gown was designed by Celine’s Hedi Slimane and her look also featured a cape that looped around her neck. The actor donned circular diamond earrings and an oversized sapphire ring from Chopard.

In contrast to the flowing gowns her fellow attendees wore on the red carpet, Candice Swanepoel showed up in a sheer Etro pantsuit look. It was covered in metallic embellishments and had beaded fringe sleeves, which served as style fodder for the cameras on the red carpet.

The legendary Parisian actor tapped Chanel for her silver dress at the Cannes Film Festival.

In keeping with the evening’s shimmery theme, Andie McDowell wore a silver-gray dress by Prada with a sequined bodice and empire waist fringe.

This article was originally published on 7.7.2021