We’ll have what she’s having. 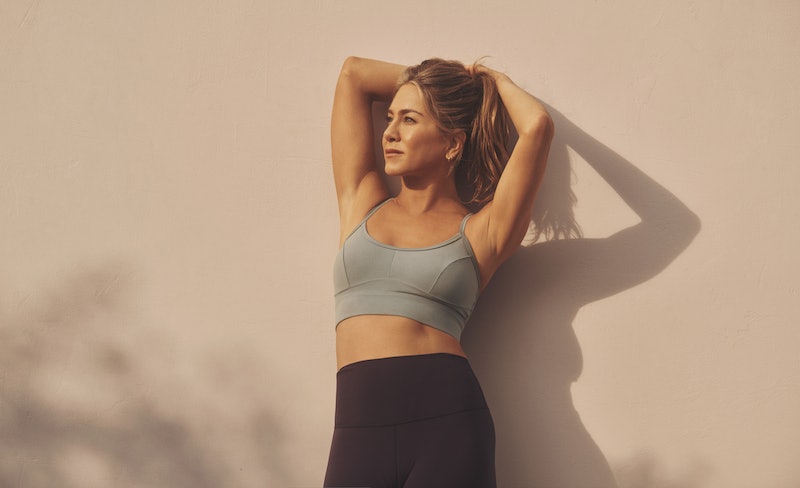 When TZR last caught up with Jennifer Aniston in 2019, she was still on-the-fence about joining Instagram, COVID wasn’t in anyone’s vocabulary, and a Friends reunion was a pie-in-the-sky dream discussed by fans and pop-culture fanatics in Reddit chats. Oh, how times have changed. Fast forward two years later and you’ll find the actor treating her 32.6M IG followers to regular posts about her dogs, the world is on (hopefully) the tail-end of a year-plus global pandemic, and the aforementioned reunion not only aired, but was watched by 29% of streaming U.S. households. Not to mention Aniston has also gotten a new gig thanks to her dedication to all things wellness.

Yes, earlier this year, the 52-year-old actor announced she was joining the team at Vital Proteins, a health company known for its buzzy collagen powders and vitamin supplements as chief creative officer. “I wanted the title,” jokes Aniston to TZR. “That’s really what I going for. Are there any other CCOs? I wanted to be the first.”

In all seriousness, The Morning Show star explains her decision to join the brand’s creative team was a long time coming, as she’s been a dedicated customer since 2014, when her doctor recommended she add collagen peptides to her diet (“I’m a very good patient.”). In fact, Aniston credits the company for transforming her morning cup of coffee (she starts every morning with a scoop or two of collagen powder mixed in), a ritual that had been consistent for years. “This is a big deal for me, because I’m a coffee purest at heart,” says Aniston to TZR, explaining that her typical coffee add-on once involved cinnamon and steamed almond milk (and whole milk or Coffeemate creamer on weekends when she lets loose).

Now, to be clear, the topic of collagen supplements and their efficacy have long been debated, with many medical practitioners arguing against the ability to build collagen in the body by ingesting it, citing little to no research proving otherwise. However, there are some small recent studies that showed overall improvement in skin, nail, joint, and bone health when consistently incorporating collagen peptides into one’s diet. And, of course, there’s Aniston, who says she saw results in as little as two months: “I’ve noticed such a difference in my workouts, my endurance, my skin.”

She explains that working with the wellness company felt “organic” as healthy living has been a part of her life since childhood. “My mom was a real wellness freak, a health fanatic to an annoying point,” says Aniston. “I didn’t have anything fun in my house ever, and my friends would come over and be like, ‘What is this sprouted bread cardboard thing?’ So I didn’t have a lot of friends come over to eat.”

And while her family’s healthy habits may have been a pain point as a kid, the actor soon found the value in them when she made the move from New York to Los Angeles to pursue acting. Aniston says being on her own sparked a “rebellion” that involved consuming a good amount of junk food — and her body did not react well. “I instantly felt like crap,” she recalls. “I really felt a difference in my energy [levels] and my skin was terrible. Over the years, I’ve educated myself more and more about why the body starts to break down and why.”

This commitment has paid off in spades as Aniston is definitely on a healthy path — and she knows it. “I have friends who can’t seem to keep up with me in ways that they should in terms of doing a workout or whatever,” she says. “I love to read up on what is the new discovery science-wise or health-wise [...] You don’t just work out and be like, ‘Oh, I’ll start Monday.’ You work out because it’s about your brain and your muscles and your bone density. There’s so much more than just fitting into your size 25 jeans, you know what I mean?”

That said, a crucial and often overlooked part of living a sustainable, healthy lifestyle is also knowing when to give it a rest. Believe it or not, Aniston is big on working in the occasional indulgence that extends past her weekend Coffeemate obsession. “In-N-Out Burger,” she says, quickly naming her top treat. “A Double-Double with everything and raw onion. I mean, but I also have Mexican food once a week, and I can’t not have pasta once a week. I also have pizzas all the time, because I have a pizza oven. I think you have to love what you’re eating as opposed to feeling guilty about it afterwards. I have girlfriends who literally still diet like it’s 1991 — like, they won’t touch a carb.”

The foodie refuses to subscribe to the notion of attaching food to shame or guilt. Everything can and should be done in moderation. “I believe in thriving as we get older and having vital lives,” says Aniston. “Shame’s a waste of time.”