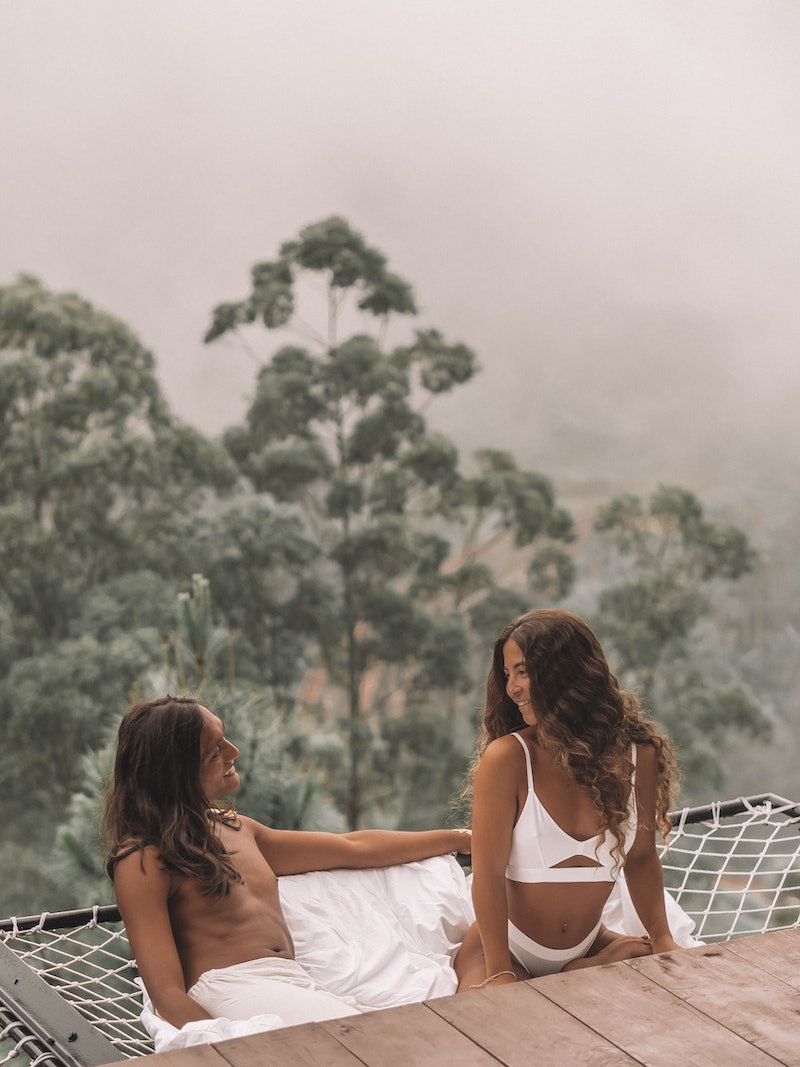 The quality of a relationship is oftentimes measured by its longevity. After all, there’s no point in staying in one for a prolonged amount of time unless it’s enriching, fun, and exciting. So what’s there to say about Allee Lizama and Hendry Gurung? It’s been nearly a decade of deep connection and wondrous adventures and, according to the couple, their affection for each other still feels fresh. When asked about the secret formula to their longterm relationship, they point to consistent and mutual meditation and mindfulness.

The duo yoga instructors have been practicing mindfulness and meditation since they first met back at the College of William and Mary and claim that it has unlocked a level of connection seemingly beyond the norm. “When you do the work to understand yourself and see your own s**t, you can then understand your partner and look beyond immediate emotions,” says Lizama. Whether it’s a serious issue, such as a car accident that led to physical injuries while in college, to smaller hiccups like ‘hangriness’ (hungry and angry) their mindfulness practice has proven beneficial every single time. According to them, the practice has allowed them to seamlessly navigate through difficulties by acknowledging and addressing them as they come. “Identifying habits and routines that may be negative obviously provide a sense of clarity, and then you’re able to apologize and find ways to fix them.”

And while understanding and apologizing to your partner sounds like relationship advice 101, Gurung thinks couples should be aware that it’s not as easy as it seems. “It’s something you have to work towards,” says Gurung. “It’s not going to happen overnight and you really have to set aside a ritual or pattern when you’re actively working on it. It’s easy during the good times. But during the times when you really need it… it helps to make mindfulness a habit.”

By definition, mindfulness is the meditative practice of focusing on one’s awareness in the present moment. Staying in the present is often met with the acceptance of one’s feelings, body sensations, and thoughts. According to the American Psychology Association, mindfulness-based therapies have been proven to boost memory, reduce stress, and even decrease emotional reactivity. And, while these statistics point to a positive note on an individualistic level, Lizama highlights a unique issue that arises when mindfulness plays a role in relationships. “We live in a society where relationships are all about ‘how does this person make me feel,’ instead of asking ‘what are we doing to enrich the other person’s life.’”

Milou Haskin, a community organizer and mindfulness facilitator based in New York City, seems to agree. According to her, modern mindfulness is often too individualized. While she acknowledges that the practice “starts with ourselves and recognizing what we truly need,” the purpose of mindfulness in relationships is about genuinely showing up for others. “You’re meant to be there for someone in a non-judgemental way, free from any projections or preconceived notions,” Haskin says. “It’s about engaging with the world and impacting others.”

In my own personal relationship, mindfulness and meditation begin on the individual level with the intent of benefitting the other. For example, I meditate in the morning before all other activities. I sit with myself, how I’m feeling, and how I want to go about the day. Deeper meditation during more stressful days allows me to identify how past experiences and childhood trauma cause me to react to certain situations with my partner. That being said, when it comes to conflict, my partner and I swear by one rule rooted in mindfulness: It’s never about who is right or wrong. Rather, it’s about understanding where we are coming from, empathizing, and offering ways to better ourselves.

The practice of mindfulness in relationships sounds like an eternity of calm. But, Haskin believes the truth can be seen in the opposite. In relationships, rough times are inevitable and bound to happen. As they say, no relationship is perfect and tensions will be high and emotions are sure to arise. Can mindfulness withstand the tougher moments?

For the couples or individuals interested in implementing mindfulness and meditation in their own routines, it’s important to start small and build step-by-step:

“A myth about mindful people is that they’re always calm and stable,” says Haskin. “But, mindfulness is not about sugar coating. It’s about truly being with your feelings, identifying why they’re triggering, and working towards a better, non-reactive outcome.”