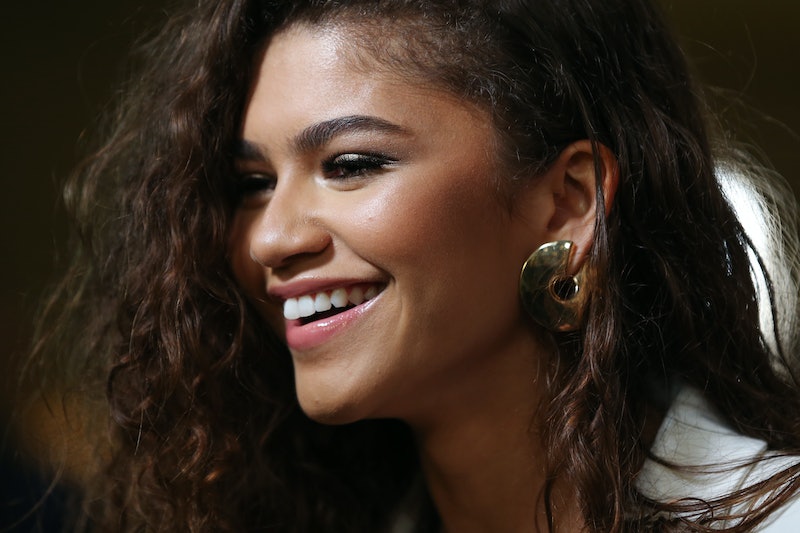 Awards show season is upon us, and Zendaya's latest red-carpet dress is filled with surprises. The Euphoria star attended the Australian American Association Arts Awards in none other than a Christopher Esber 2020 Resortwear gown, a move that was all risk and all reward. There is no shortage of designers gunning to have Zendaya as their stage for the evening — and yet, the teen has enlisted the Australian costumier not once, but twice. This past November, she wore a similarly shadowy look by his namesake to the People's Choice Awards. The differences between Zendaya's Jan. 30 rendition and this looks' original debut on the runway last May are striking.

When seen at Mercedes Benz Fashion Week, the model at Christopher Esber's show strutted with wrists and toes exposed, making the frock far more beach-appropriate. The model's white strappy sandals, sleek hair and rosy makeup tied the dress near-irrevocably to the Resort realm. Zendaya, ever the rule-breaker, deviated entirely from this version. She slipped on a pair of black pumps, teardrop earrings, and toasted makeup, totally reinventing the context that the dress would be living in for the night — all apart from her middle parted hair.

The focal point of her look is most often her slender midriff — take, for example, her lacquered pink Tom Ford look at the Critics' Choice Awards just last week. This function was no exception. She kept the partial sleeves tied around both wrists, and, in great taste, left her handbag at home, making great use of the wide-profile pockets affixed to her hips.

Stepping out in a look so intentioned for warm weather in the midst of January in New York was a brave stylistic choice, but by allowing the look to remain exclusively head-to-toe black, she allows its wintry side to come forth while still enjoying her playful rendition on summer style.

Who's to say what's in store — last year, the starlet announced her ambassadorship to Lancôme over the duration of the week leading up to the event in LA, donning a crystallized pink frock that matched the aesthetic of her new fragrance bottle. Be sure to keep an eye out for more bold strokes from the style maven.