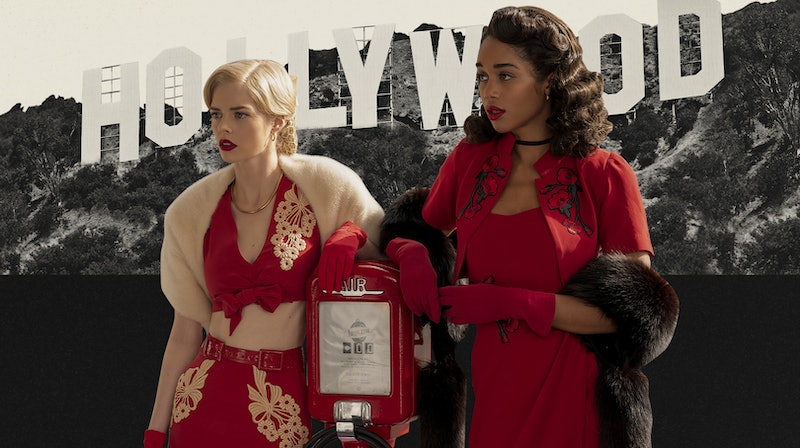 Hollywood isn't just informed by fashion — it transforms it. This is true with Iconic movies like Clueless and Marie Antoinette or characters like Carrie Bradshaw and Mia Wallace of Pulp Fiction. On the red carpet, Rihanna's boundary pushing Met Gala looks or Gwyneth Paltrow's iconic Ralph Lauren dress can serve as inspiration in the moment, but also decades later. In Ryan Murphy's newest Netflix series, Hollywood, the costumes will remind you that this symbiosis can be traced back as far as the post-World War II era. The series homes in on the impeccable glamour of the era that offers a welcome escape from the current climate. The nipped suits and glamorous gowns are a far cry from the soft hug of sweats that even celebrities choose as they tune into the show from the comfort of their own couches. And the fast-paced plot is equally enthralling as it weaves the stories of emerging stars played by Laura Harrier, Daren Criss, and David Corenswet against the industry politics of the old guard including Holland Taylor, Patti LuPone, Joe Mantello, and Jim Parsons.

For the first season (which debuts May 1), Murphy enlisted two costume designers — his longtime collaborator Lou Eyrich and Sarah Evelyn, who previously worked on American Horror Story with the show-runner — to build a sartorial world and help the show's power dichotomies read all the way into the clothes. Eyrich explains over the phone that goal was to capture "the Hollywood glamour feel of the ingenues and directors coming in versus the polished, tailored looks of power players, the agents, the producers, and wealthy wives." Adds Evelyn, "we started with research, boards, and drilled down on the colors. Patti LuPone is like Barbara Stanwyck. Camille [played by Harrier] is our Katherine Hepburn."

To get the costumes just right for the show's time period — between 1947 and 1949 — Eyrich and Evelyn had to find ways to both source and create designs that fit the show's demand. Luckily, Evelyn explains, "we were able to pull clothing with a running start. We were coming off of Ratched, another '40s show [also helmed by Murphy for Netflix], so we came in with the accessibility."

The team dove into the traditional roads of on-screen sourcing: visiting costume houses and privately owned archives where stylists can rent vintage and antique pieces, but competing with a handful of other period shows from the era made it difficult to find the volume and quality of clothing needed. "We would get [a piece of] clothing and it's an amazing piece, but might only last two hours instead of four hours or two days," Evelyn notes of the delicate nature of vintage garments. "Also, the modern body doesn't always fit right into vintage clothing. So we decided who are we gonna make clothes for, and how." Since proportions today are different, the team ended up designing and producing anywhere between 30 and 90 percent of the clothing for specific characters to fill the gaps of what they couldn't find.

"What I liked was designing the uniforms of pump jockeys from the service stations," Eyrich explains of the outfits worn by the young troupe of aspiring Hollwyood players acting as escorts out of a local gas station. "We had a lot of different bodies and they all had to look period. We had to research what gives guys that classic '40s movie star look but still translates to squeaky clean and optimistic."

One of the most captivating characters on the series, especially as it pertains to fashion, is Avis Amberg, a silent movie star and the wife of a major studio exec portrayed by Patti LuPone. As she transitions from an adrift housewife to empowered studio exec, her wardrobe reflects her character's transition — from her playful leopard pillbox hat and feathered robe to embellished off-the-shoulder gowns, and sharp suits.

"Patti Lapone is amazing, she loves costumes, and she makes them work," explains Evelyn, adding that both Barbara Stanwyck and Joan Crawford had a similarly daring style. "She will do as many fittings as you want, she goes all the way. We had a great character and an actress fully invested so we leaned into it and went for it." Adds Eyrich, "Her style was tailored, and well made. Those suits with a broad padded shoulder and a cinched waist create a great silhouette." The duo worked with a cutter and fitter, Joanne Mills, who they describe as instrumental in creating many of the shows most iconic pieces.

And as for the show's red carpet moments, when asked how the styles might mirror a more recent premiere or award ceremony, both Eyrich and Evelyn explain that staying true to the time throughout the show was a key to success. "Ryan really wanted this to look authentic," Eyrich says. "You want it to be completely lost in the era." While Evelyn adds, "we were sensitive to things not looking modern. A lot of modern gowns are inspired by older silhouettes from the '30s and '40s anyways."

Watching the show, it's hard not to consider the odd act it must be to be a part of modern Hollywood while recreating a version from a bygone era. Looking at the sharp suits and sweeping dresses, you can find similar silhouettes on today's runways and on red carpet too. But, this polished primping is now on hold IRL, making the escapism of Hollywood all the more important. Curling up with a show that's as visually stimulating as it is dramatic can be a small but welcome respite, no matter what you wear while you watch. Below, see more of the fashion from the show.