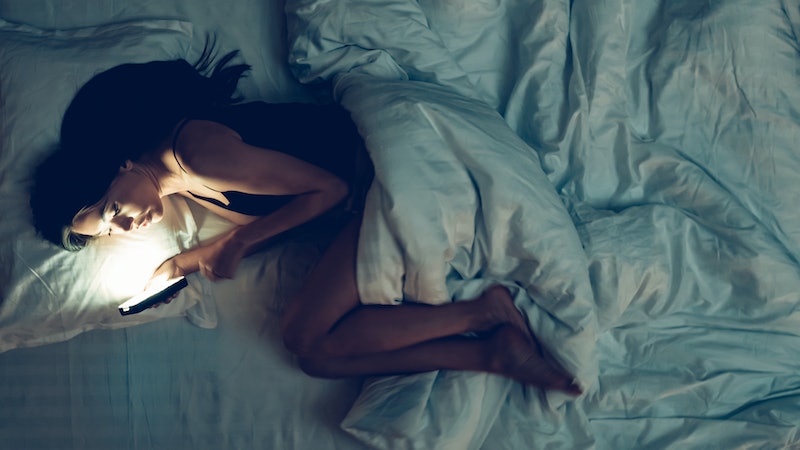 You already probably know that not getting adequate sleep can affect everything from your mood to your metabolism — among a slew of other health-related issues it can cause. And that's why it's doubly frustrating when a buzzed-about supplement or solution doesn't seem to be working for you. The good news is, if you've ever asked yourself, "Why doesn't melatonin work for me?" experts not only can help by offering an explanation, but they just might be able to steer you to some relief at last.

First, it might be helpful to consider what melatonin actually is, as well as why it benefits many with sleeping problems. "Melatonin is a hormone that our brains naturally release at night," explains Dr. Kate Denniston, naturopathic doctor and founder of Los Angeles Integrative Health. "[It] has numerous functions in the body including helping us fall and stay asleep as well as aiding in tissue repair and inflammation regulation." According to the specialist, this hormone is released in the dark, as light signals the pineal gland to block its production.

And, in addition to its ability to help some people get better rest, Dr. Denniston notes that it has other major functions in the body. "Melatonin increases the ability of our cells to fight free radical damage by increasing our production of antioxidant enzymes," she says. [It] also increases the production of glutathione, a compound known as the 'master' antioxidant of the body."

That said, in terms of its sleep-inducing effects, it won't work well for everybody. While Dr. Denniston explains that melatonin may be used successfully for those with jet lag, occasional restlessness, and irregular sleep schedules, someone who's losing sleep due to stress and anxiety may not be able to feel its effects. "A lot of time people with low-grade anxiety have a hard time falling asleep, so a supplement that helps them relax is a better option than melatonin, because they likely already produce enough," she says. So what might those supplements be? The nootropic L-theanine can help by supporting the production of calming neurotransmitters in the brain and blocking excitatory transmission, which Dr. Denniston shares is what makes people feel agitated in the first place.

Another supplement to consider is magnesium glycinate, which Dr. Denniston explains can also help induce a calm feeling — especially if you're someone who's not ready to give up their coffee habit. "Magnesium is a cofactor in the metabolism of catecholamines, like adrenaline, so it can help decrease the stimulating effects of caffeine taken earlier in the day," she says.

Besides stress, certified clinical sleep health educator and founder of Insomnia Coach Martin Reed adds that those who suffer from chronic insomnia are also likely not to find relief from melatonin alone. "Melatonin is more of a signal for sleep," he explains. "The body releases a pulse of melatonin at a certain point in the evening and a few hours later we become ready for sleep." And even if an insomniac is lucky enough to take the supplement within that window, it still might not work for them. Instead, the specialist suggests cognitive behavioral therapy as a means of finding relief.

Whether you're a candidate for melatonin or need to take a different route to dreamland, ahead a few options to help you get a good night's sleep.