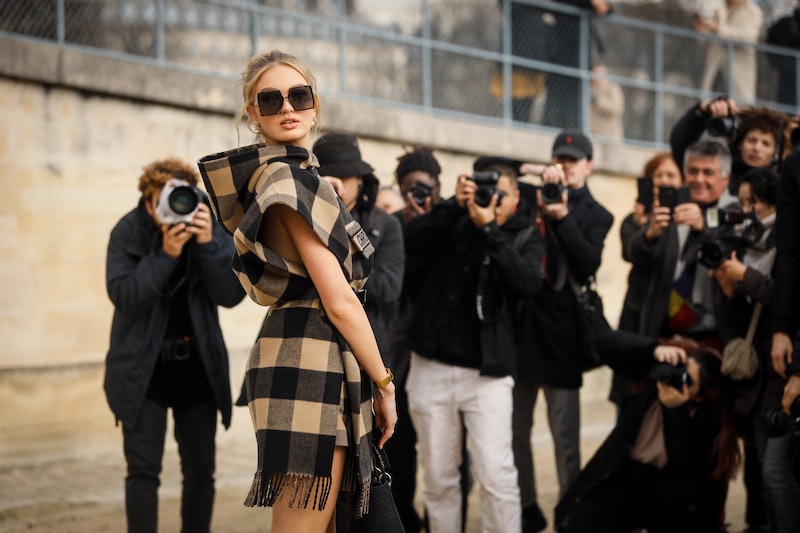 Paris Fashion Week is officially here and the uniform of choice for guests at Dior's Fall/Winter 2020 show included some iteration of the house's classic plaid print. Though you'd be hard-pressed to find an attendee that wasn't draped in the checked motif, the fact that each showgoer styled the detail so differently is what's worth paying attention to. Plus, with the checkered trend on the rise, you may want to consider bookmarking the show looks, below, for inspiration later down the line.

As fashion's favorite celebrities head to Paris for Fashion Month's final-act, there were a laundry-list of notable names in attendance at Dior's runway show on Feb. 24. While the newly debuted show was an ode to feminism, there were a ton of menswear-inspired looks by the house in the audience. With impeccable tailoring and matching suiting, to name a few, there was no shortage of mini dress and full skirts, either.

Of course, many of the brands staples were predictably present — plenty of attendees carried Dior's viral tote bag, while its smaller adaptation, the Mini Book Tote made an appearance, too. More importantly, though, was the overall theme of major print mixing. Making a rare public appearance, Demi Moore opted for the print in the form of a full midi skirt. While model Romee Strijd went with the same neutral pattern, but in a poncho-style dress, instead. So regardless of your own personal styling preferences, there's ample inspo to choose from.

Scroll ahead to see the best-dressed guests that all styled the print completely differently.