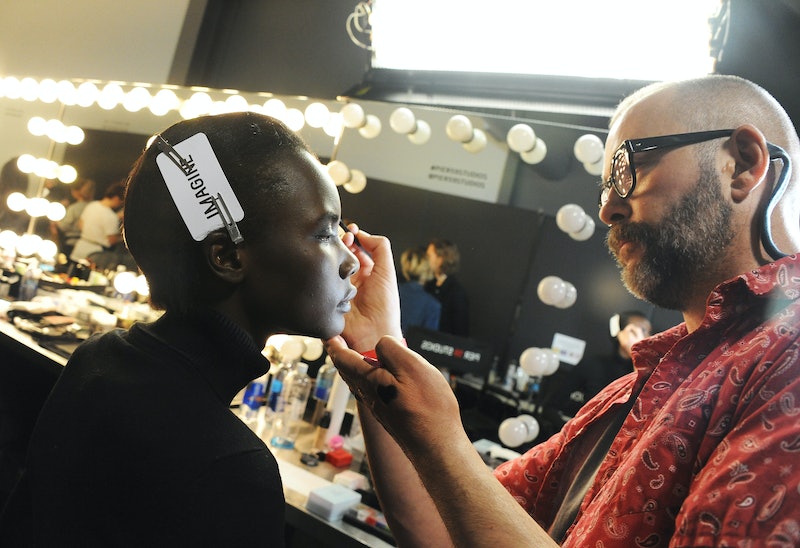 If you've ever traveled the fashion month circuit — from The Big City all the way to the City Of Light — you likely recall seeing the same rotation of makeup artists, hairstylists, nail techs, models, and dressers gathered shoulder-to-shoulder backstage. But as most shows and presentations are virtual this season, the month looks a bit quieter for the artists who consider fashion month their personal olympics. "We've had to adapt to change this year, so I already anticipated not having any shows," editorial makeup artist Jaleesa Jaikaran, who assists major names like Pat Mcgrath and Lisa Eldridge, tells TZR. And while artists have definitely re-evaluated the season, not all are completely throwing in the towel.

"I feel absolutely gutted," makeup artist Grace Lee, who's keyed shows like Cushnie and Libertine, tells TZR. "I’ve been involved with New York fashion week for eight years straight, so it feels very, very strange that I’m sitting out. I think physically and emotionally my body is very confused." For Jaikaran, the adrenaline she gets from a jam-packed day will be missed this season. "This season I haven't done any shows, which has been quite different; I typically do at least 10 to 14 per season," she tells TZR. "I really love the bustle of fashion week, between shows and private clients — it's always a good time."

There are, of course, upsides and downsides to a virtual fashion week from an artists' perspective. Though manicurist Jin Soon Choi says a virtual fashion week is less hectic and more relaxing, it's nowhere near as exhilarating as the real thing, which she compares to the thrill of a big party or celebration. "It can be very innovative, like creating movies," Choi says. "But it’s not the same excitement for me, physical shows are more lively and powerful with lots of expectations and excitements."

And even though the rapport of being backstage is missing this month, some artists hope that this season's sacrifice will be for the greater good. "Hopefully, virtual and limited capacity shows will bring about more sustainable practices for fashion month, and make us consider how we can reduce energy use and waste production," makeup artist Diane Kendal says.

Ahead, read how backstage veterans are participating this season, and what they predict the future of fashion month holds.

"I have no season, that’s the simple answer. In New York, I did a look-book session with Zero + Maria Cornejo; we did some stills and a video; I’ve done a session with Michael Kors that will probably be coming to life in October.

"Outside the pandemic, fashion month and the fashion industry have been accelerating at such an insane degree, and in some ways, it's probably a good idea that the breaks are on. It's a horrible way to put on the breaks, but people have stepped back a little bit and have to re-evaluate.

"We’re missing the connection to be able to touch and feel a fabric, to look at the hair and makeup, and to see clothes in motion. I was talking to Michael Kors the other day, [and] it's the same feeling of missing the experience of live theater or live music. We’ll have to find a way to do that."

"I'm choosing not to travel this season for my own concerns and [those of] my clients that are here in New York. There's been an uptick in photoshoots in the meantime. Personally, I've been working on editorials and campaigns for various brands, and I've been keeping an eye on what's happening via social media. I also do a lot of content creation for my social channels for Youtube and Instagram and for my podcast, The Life of a Makeup Artist. I've been connecting virtually with brands for product launch events, meetings, and doing my own beauty and business consultations.

"I do think we will see a lot more virtual shows, and I'm not entirely sure how that will affect creatives. If models are still being used, I do believe that makeup will still be needed. I've already seen shows starting to happen again, so I do believe that fashion week will live on — just with more space backstage, which I can't say that I'm mad at."

"I think during this pandemic, more regulations with spacing is mandatory so I think for artists working backstage, it’s been great to not be crammed into backstage spaces. They definitely have more room to work. A con, I think, is that less designers are deciding not to show. The demand for makeup and hair is reduced.

"I think [fashion month] will evolve. Not sure to what extent, but I know that things will not go back to normal as having cramped backstage areas. The need for bigger spaces will definitely be a factor. It’s basically now adjusting to whatever the new normal is."

"It's different: A mix of some shows, shoots and videos. We are being very creative! We will be doing a few shows in Europe, but the schedule is constantly changing. I have had Zoom fittings and talks about briefs. It's such a wonderful tool for creatives. We have been doing some hair trials in my studio in London also, which is something me and my team have always done to try out ideas before a shoot or show.

"I hope we will have ample space to appropriately social distance backstage, and it will be well ventilated! Unfortunately, due to lack of space in some of these beautiful venues, you are often cramped backstage without windows or heating or air conditioner, so this could be a change for the better for the beauty teams.

"I’m all about looking at the positives. The pros [are that] the audience you can reach is limitless. It's also inclusive, everyone could potentially be invited. There is also an element of taking people behind the scenes, giving the access to the journey from start to finish, which they might not have been able to truly see if it was just an audience of 200 attending a show. It's exciting!

"I hope we return to that exciting whirlwind month that sees creative teams come together. Maybe it's less shows, maybe it's a mix of shows with fashion films. I’d like to see fashion films be about the whole experience. Backstage beauty, inspirations, and atmosphere included. Maybe there’s a new interactive medium I can't yet envision. Who knows! But change is good, change brings modernity."

"Usually JINsoon sponsors shows or I am a lead manicurist with my team for brands like Marc Jacobs, but this year I will not be participating and, instead, focusing on my spas. With the recent re-opening after the COVID closures I have been spending most of my time making sure each location is running smoothly and my clients feel safe and taken care of.

"Unfortunately, my personal life is a bit on-hold right now because of the current circumstances. I will be focusing on working at my spas so I can get through this tough time for small businesses. I am also working on launching new products for JINsoon, which is my favorite part of the job.

"It is much easier and less hectic for me with virtual shows because I don’t have to do much and I can relax more. But it’s not the same excitement for me, physical shows are more lively and powerful with lots of expectations and excitements. It was like a big party or event to celebrate.

"I think many designers are thinking of new and creative ways to share their collections, some of these may be here to stay. I think there will always be a New York Fashion Week and shows at Spring Studios. But I also have seen it change so much since it was confined to Bryant Park. Designers have amped up the production and have chosen new locations and new ways of showing over the years. This is just another opportunity for evolution."