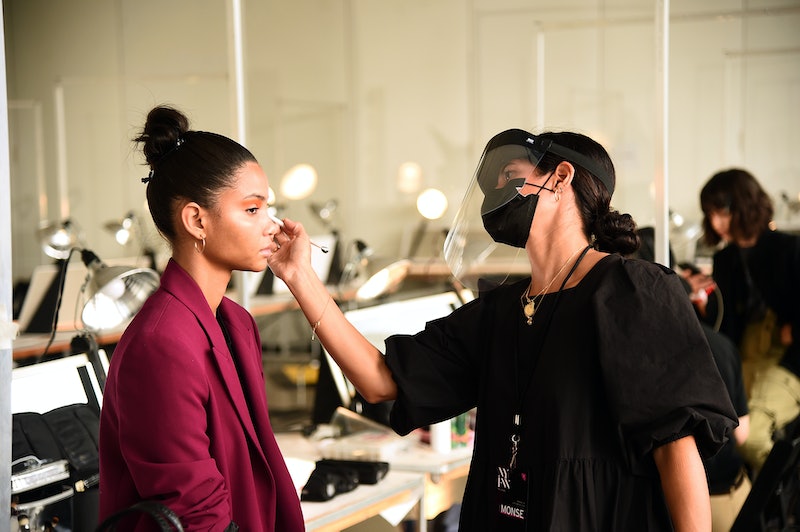 Backstage at a fashion show is a symphony of chaos. After being vetted by burly security and clipboard-wielding assistants, the frenetic flurry of activity is revealed as the welcoming cloud of hairspray dissipates. The buzz of backstage becomes a creative laboratory where fashion week beauty products are trialed and tested on an array of skin tones and textures, arming the makeup brands with invaluable insights before launching for us to buy.

This year, however, the typical scramble of models and makeup artists has been paused due to an uninvited guest — COVID-19. With bi-annual Fashion Month, which typically hosts thousands, under strict social distancing guidelines and international travel heavily restricted, much of the sartorial events have gone digital. As virtual viewings become the new norm, how are the leading beauty brands and makeup artists testing both new products and their creativity while restricted to Zoom?

For MAC Cosmetics, a brand that supported their first fashion show as early as 1995, this is the first season they will not be providing physical artistry support in order to protect the health and well-being of their artists and community. “We’re finding new and innovative ways to help designers bring their collections to life, such as virtual artistry consultations to create specific looks and assist models through self-applications of their makeup," Drew Elliott, the brand's Global Creative Director, tells TZR.

And in light of this unique time, MAC’s iconic paper face charts that serve as the blueprint when replicating the looks on models have gone digital in order for artists to bring those visions to life. “We are releasing them for the first time ever this year so our fans can follow along,” Elliot explains. Rather than blending blusher onto paper, the latest technology uses augmented reality, which allows artists to superimpose everything from the gentlest wash of eyeshadow to the boldest, matte lip directly onto a picture of a real model, via a Tablet-based application. Going digital not only has desirable sustainability benefits but also lends itself to a more realistic proposal of how the look will translate when applied to a real face as opposed to a 2-dimensional chart.

Trickier to replicate however, is the backstage environment which often results in products getting their “runway-approved” status. It’s no easy feat as makeup has to last hours after initial application under the scrutiny of bright lights, numerous outfit changes, and inevitable snacking that threatens to disturb even the most perfectly applied pout. Elliot explains that MAC’s international artists and creative masterminds have worked tirelessly over the past several months to develop innovative makeup looks with their products, which are carefully formulated and tested to ensure the highest quality and most importantly, consumer satisfaction.

For Maybelline, who has been the official makeup sponsor of New York Fashion Week since 2009, backstage has also served as their playground for testing and debuting new products which is a strategy they have had to forgo according to Amy Whang, the senior vice president of US Marketing. “We are looking to our professional community of makeup artists to test products in advance of their launch to ensure they are not only high-performance, but also on trend," Whang tells TZR. "Typically, we choose a few new products to put to the ultimate test backstage at NYFW, but due to COVID-19, we are relying on the expertise of our team of makeup artists at home and on photoshoots following proper guidelines.”

As for the artists themselves who aren’t able to paint on their typical human canvases, their creative prowess has had to pivot just like any other industry. “I can say with confidence that the Maybelline New York artists have definitely missed doing makeup on others, but they have used this time to inspire themselves in other ways,” Whang tells TZR. Throughout the pandemic, Erin Parsons, the brand's global makeup artist, is consistently sharing beauty content on her personal Instagram and has provided step-by-step tutorials on recreating some iconic looks, including floral lashes, Twiggy and 1960s inspired-looks. “She’s also helping others do their own makeup, including Maybelline spokesmodels Gigi Hadid and Emily DiDonato, via Instagram Lives that were hosted on our channel,” Whang adds, which inevitably gives consumers closer access to the elusive world of backstage beauty secrets.

The MAC Artists creating flawless looks this Spring/Summer 2021 season, are challenging themselves to adapt despite the restrictions. “This new way of working has pushed us to be more creative and agile,” Elliot explains. Creating looks for a diverse range of both established and emerging designers across all four cities, Elliot says that they’re working in close partnership with their design partners. “To ensure that our looks align with their visions, we’re providing multiple opportunities for them to give feedback along the way, including countless virtual consultations and makeup test runs.” Rather than merely live-streaming runways, designers are producing films and creating look books to showcase their work. “Fatima Thomas, one of our Senior National Artists, developed the makeup looks for a short film titled Joy Run, which Chromat recently premiered at New York Fashion Week to serve as a celebration of gender inclusion in sports while spotlighting the brand’s vibrant fall collection.”

As fashion designers reinvent their approach to Fashion Week, beauty brands and makeup artists have to do the same. Although much has been argued about the relevance of the traditional runway, we still wait with bated breath for the first glimpses of seeing the perfectly executed marriage of fashion and makeup teeter down a catwalk. While Zoom waiting rooms may be the new backstage for the unforeseeable future, they’ll be no shortage of beauty looks and innovation if the leading cosmetic players get their way.