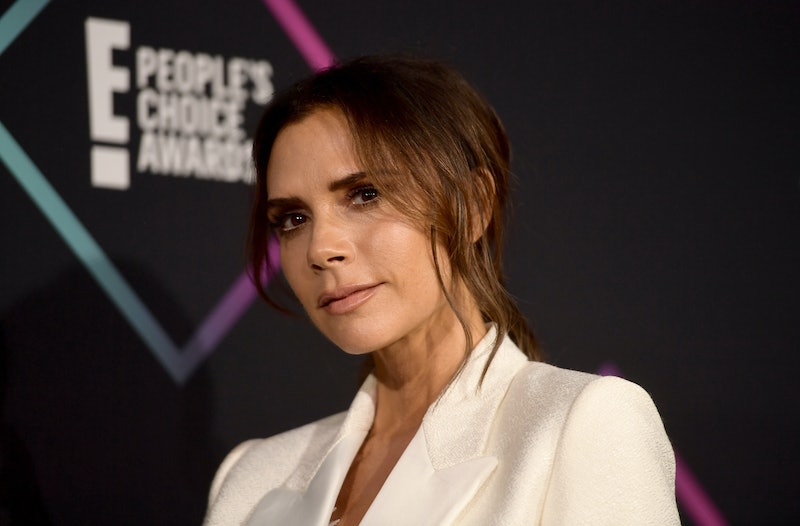 The best way to elevate neutrals is with a bold shoe, according to this former Spice Girl. Her springtime street style has proven just how obsessed Victoria Beckham is with her neon-green heels. You will be, too, when you see how effortlessly well they work with everything in her closet.

While she certainly isn't afraid of color, this fashion designer remains the queen of neutral dressing. On any given day, you'll likely find Beckham dressed in chic all-black (despite the season), timeless black and white, or monochromatic beige.

Wearing head-to-toe basics gets a bit boring after a while, though, and that's when Beckham's secret weapon comes in handy. Her statement accessory of choice lately has been a daring slime-green pump.

The first time she debuted the bold shoe — Balenciaga's neon leather Square Knife pumps — was in early May, when she wore them with a grid-print button-up top tucked into cuffed black skinny jeans.

A week later, the 45-year-old sported them again with seemingly the same pants, a plain white tee, and a black-and-beige contrast-sleeve leather biker jacket from the Victoria Beckham collection (of course). Though she almost exclusively wears her own designs, she didn't hesitate to make an exception for these highlighter heels.

The latest in the designer's neon pump campaign came on Thurs. in the form of an off-duty outfit so simple it might already be hanging in your closet. While out in London, she tucked a slouchy white t-shirt into baggy jeans cuffed above the ankle, giving way to her favorite flamboyant footwear.

The heels are a hit with other fashion girls like Hailey Baldwin and Kylie Jenner, too, who have both been wearing them around all spring. Kendall Jenner and Gigi Hadid have warmed up to the daring color trend as well.

Pairing your neon pumps with a neutral outfit is perhaps the least intimidating way to ease into the vibrant color scheme. Copy Beckham's outfits with your own pair of statement shoes, ahead.

It's easy to see why Beckham, Baldwin, and Jenner are all obsessed with these flashy neon pumps.

These gloriously bright (and super-affordable) shoes adhere to both the current strappy sandal and block heel trends.

Elevate your basics with these incredibly chic slip-on mules in the season's slime green.

Casual weekends call for these comfortable espadrilles in the popular highlighter hue.