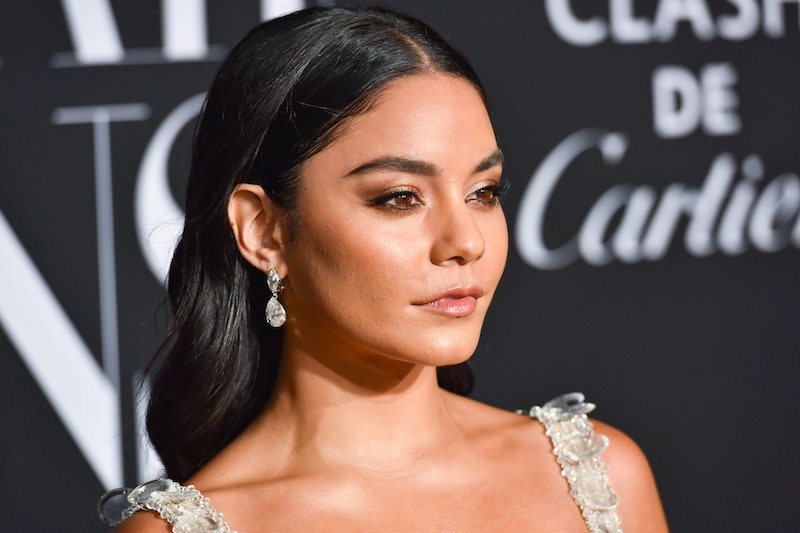 Weds. night's Bad Boys For Life premiere was merely an opportunity for Vanessa Hudgens to dye her hair brunette and dress in feathers. The actor exhibited her version of the newest old Hollywood trend that's cropping up on every red carpet this month, including bouncy waves and a sparkly gown with over-the-top plumage. She even went as far as to color her hair ahead of the event.

So far, the 2020 awards season has sparked a resurgence of 1950s-era pin curls, Marilyn Monroe lips, and gowns that look like they might have been made more than half a century ago. Priyanka Chopra, Jennifer Lopez, Winnie Harlow, and Scarlett Johansson have already shown their support of the old-school aesthetic, and now Vanessa Hudgens is, too.

For the Hollywood premiere of her new movie, Bad Boys For Life, the actor opted for a white, jewel-encrusted Georges Hobeika gown (the same designer behind Jennifer Lopez's latest old Hollywood moment), which featured a long train and hundreds of feathers along the waist and neckline.

Her hair and makeup adhered to the vintage theme without looking too costumey. She wore a cat eye and subtle pop of glitter on her lids, a quintessential bold lip, and those voluminous waves that were popular back in the day. Part of the look — the part where Hudgens dyed her hair a rich chestnut hue — is permanent.

Hudgens seized the opportunity to debut a wintry new hair color during Weds. night's premiere. While she typically wears it black, this lightened-up look is much softer and more romantic than her usual. She wasn't afraid to show it off on Instagram, either, posting a series of photos and videos (including one in which she's posing with Snoop Dogg) from the night.

Her colorist, Cassondra Kaeding, took to social media, too, saying "Vanessa killing it tonight with new #haircolor." Others couldn't help but to point out how confident the actor looks to be feeling after her rumored split with longtime boyfriend Austin Butler. Perhaps it is a breakup makeover, after all?

In any case, here's to hoping Hudgens' new caramel tones are here to stay.